THE BUCK'S ROW VICTIM IS IDENTIFIED 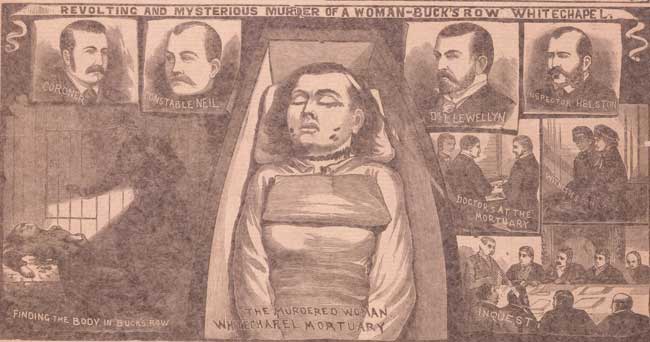 THE POLICE CANVASS THE DISTRICT

The first problem to confront the police as they launched their investigation into the Buck's Row murder was identifying the victim. The body was, therefore, photographed, and copies of the photograph were then shown around the district by the police officers who were conducting the investigation.

Her clothing was, so LLoyd's Weekly Newspaper later reported, "of a common description...The only articles in the pockets were a comb and a piece of looking-glass." This led the police to conclude that the murdered woman was an inhabitant of the numerous lodging-houses of the neighbourhood, and officers were despatched to make inquiries at these establishments.

As the news of the murder spread, first one woman and then another came forward to view the body, and at length it was found that a woman answering the description of the murdered woman had lodged in a common lodging-house at 18, Thrawl-street, Spitalfields.

Women from that place were fetched, and they identified the deceased as "Polly,", who had shared a room with three other women in the place on the usual terms of such houses - nightly payment of 4d. each, each woman having a separate bed."

Meanwhile, Inspector Spratling had noticed that the skirt of one petticoat and the band of another article of clothing bore the stencil stamp of Lambeth Workhouse, and detectives were immediately dispatched there to get the matron to view the body and see if she could identify the victim.

She couldn't do so, and stated that the clothing might have been issued any time during the past two or three years. 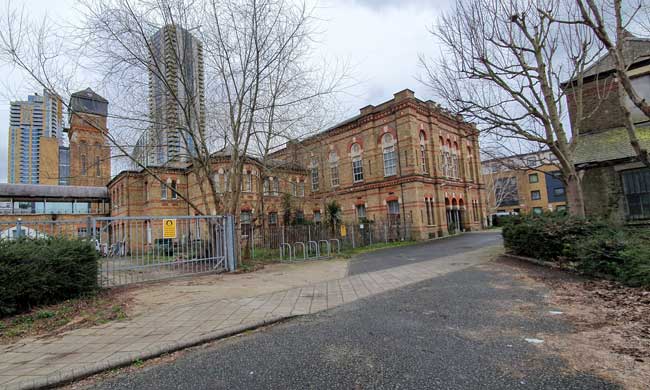 The Water Tower and Master's House of the former Lambeth Workhouse.

However, further inquiries led the police to Mary Anne Monk, with whom Mary Nichols had struck up a friendship during her most recent stay at the workhouse in April and May, 1888.

On the evening of Friday, 31st August, 1888, Mary Anne Monk was taken to the mortuary, and, having twice viewed the body, identified her as Mary Ann Nichols, also known as "Polly" Nichols

Acting on information provided by Mary Anne Monk, the police were then able to trace Edward Walker, and on Saturday, 1st September, 1888, he was taken to the mortuary, where he formally identified the body as being that of his daughter Mary Ann Nichols.

On the afternoon of Saturday the 1st of September, 1888, at the Working Lads Institute, on Whitechapel Road, Wynne Edwin Baxter, the Coroner for South-East Middlesex, opened the inquest into the death of Mary Ann Nichols.

The first witness was her father Edward Walker, who confirmed that the victim was his daughter, Mary Ann Nichols, and then went on to give details of her life.

He was followed by Police Constable John Neil, who testified to having found the body in Buck's Row.

The final witness of the day was Dr. Ralph Rees Llewellyn, who outlined the horrendous injuries that the victim had suffered.

At the conclusion of the doctor's evidence, the Coroner adjourned the inquest for two days. 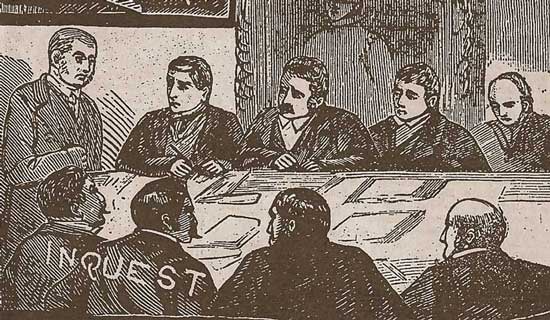 HER ELDEST SON VIEWS THE BODY

Last evening, after the inquest on Mary Ann Nichols, the eldest son of the deceased woman arrived at the Whitechapel mortuary and recognised the body as that of his mother. He was respectably dressed, and seemed much affected at her untimely end.

He is by trade an engineer, and lives with his grandfather, Mr. Walker, but for some time had not been on speaking terms with his father."

An hour later William Nichols arrived at the mortuary to view the body of his estranged wife, and it was evident to those present that there was animosity between William and his eldest son.

When the meeting between the father and son took place, neither of them spoke to each other, till the deceased's father said to Mr. Nicholls, "Well, here is your son, you see. I have taken care of him, and made a man of him."

The father then spoke to him and said, "Well, I really did not know him; he has so grown and altered."

William then went into the mortuary to see if he recognised the deceased as his estranged wife. Greatly affected by the sight that greeted him, he was reported to have exclaimed, "I forgive you, as you are, what you have been to me."

According to Lloyd's Weekly Newspaper:- "He came out ashy white, and simply said, "Well, there is no mistake about it. It has come to a sad end at last."

The Body Taken To The Mortuary

The Funeral Of Mary Nichols