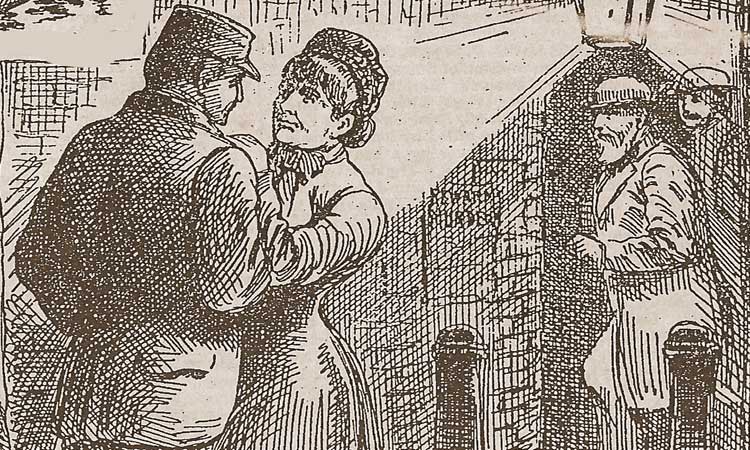 In 1885 Parliament passed the Criminal Law Amendment Act, which was intended as:-

An Act to make further provision for the Protection of Women and Girls, the suppression of brothels, and other purposes.”

Two of the more far reaching aspects of the Act were the raising of the age of consent from thirteen to sixteen and the criminalization of male homosexuality, which would remain criminalized until the 1960’s

Of immediate impact on the victims of Jack the Ripper was the Act's tougher stance on brothels and prostitution.

CHECKING THE CAUSES OF CRIMINAL VICE

Combined efforts by Social Purists and the National Vigilance Association saw a determined effort to bring into operation and give effect to the Criminal Law Amendment Act, in particular with respect to discovering and checking "...the causes of criminal vice..." and "to prosecute offences against the law, and to expose offenders to public censure..."

The attitude of these organizations was that by working the streets and other locales frequented by "respectable" citizens prostitutes made life intolerable for the community in which they plied their trade.

As a result the consensus was that they should be treated as public nuisances. One observer complained of:-

...the fearful prevalence...of a gross state of street prostitution attended by features of a very disgusting character, particularly between the hours of 10 and 12 at which it is not fit for any respectable female to walk about and young men cannot do so without molestation...”

...there is only one remedy - repression. By the joint action of policeman and citizen, it can be repressed.”

Although the purists and the Vigilance Associations were dependent on the police to enforce the law, the police themselves were often reluctant to do so.

If a particular organization suspected a house was being used as a brothel they would report their suspicion to the local Parish Vestry who in turn would instruct the police to keep the premises under surveillance in order to obtain the necessary evidence to prosecute the owners.

However, when Sir Charles Warren became Metropolitan Police Commissioner he decided that, since watching known brothels was not officially part of their duty, his men were no longer to undertake this activity for the Parish Vestries.

Warren's main objection was that deploying policemen to watch houses of ill-repute was effectively a waste of both the time and resources of his force as it diverted officers away from crime prevention and the detection of serious crimes.

Furthermore, he noted that when the Vestries were given information by the police their response was often to caution rather than prosecute the brothel keepers, who in turn simply moved elsewhere.

Warren's belief was that it was better to contain rather than repress prostitution. In a letter to St. George's Vestry Clerk dated October 31st 1888 Warren complained that the vigilance societies were:-

...in the habit of routing out the brothels from the back slums and driving them into respectable places...and as long as there is a demand for prostitutes on the part of the public there is no doubt they will exist in spite of the Vestries and Vigilance Societies, and the more they are driven out of their brothels back slums, the worse it becomes for law and order and decency...”

By adopting a policy of containment the Metropolitan Police believed that they could confine the problem to an area they would be able to police effectively.

As for prosecuting individual prostitutes for soliciting, the police found themselves restricted by the constraints of the law, since prostitution in itself was not an offence. Soliciting was, but to prove that a woman had been soliciting was extremely difficult. Magistrates proved suspicious of convicting on the uncorroborated evidence of a police constable. As a result, the arrest, charging and convicting of a prostitute on a charge of soliciting, as far as individual constables were concerned, was problem laden. As one confidential police report stated:-

...Action is attended by much trouble, by very likely a scuffle, by cross-examination by the Station Inspector, by the necessity of making out a written report, by the loss of at least four hours rest next day at the police court, by risk of blame by the magistrate and of other consequences...excessive zeal in this direction would at one arouse the suspicion of his superiors that he was paying too much attention to this class of case to the neglect of other duties.”

Constables genuinely feared the consequences on both their reputation and career prospects and thus refused to arrest a prostitute unless absolutely compelled to do so.

In June 1887 the press had had a field day over a sensational case involving a respectable milliner by the name of Miss Elizabeth Cass. Police Constable Endacott had arrested 23 year old Miss Cass on Regent Street and charged her with soliciting.

Although the Magistrate, Mr. Newton, discharged her, he noted her occupation as prostitute and cautioned her about her future conduct. He observed that no respectable woman should be walking on Regent Street at 9pm in the evening!

Supported by her employer Miss Cass protested her innocence and insisted she was merely on her way to purchase a pair of gloves.

Indignant Members of Parliament and the Press took up her case and the resultant publicity ensured a humiliating censure of both the Police and the Home Secretary when the case against her was overturned.

Sir Charles Warren's reaction to the Cass case was to issue an order prohibiting his officers from arresting street walkers unless a direct complaint had been made by a member of the public or without corroborating evidence.

The direct result of this order was that police arrests of street prostitutes declined dramatically between 1887 and 1889.

As far as individual constables were concerned it was safer to ignore prostitutes than to attempt to repress them.

Thus by 1888 street walkers had become so emboldened by this official attitude that it became almost impossible to walk along certain London streets without being constantly and publicly solicited.

Even the National Vigilance Association was forced into a climb-down complaining that, since the Metropolitan Police were withholding any assistance and were doing so little to suppress street prostitution, curbing it was now an impossible task.

When, just over a year later, Jack the Ripper began his killing spree the everyday beat constables in the area had long been turning a blind eye to the presence of prostitutes on the streets and thus little attention was paid to them as they attempted to eek out a living by soliciting strangers to go with them into the dark corners and passageways of Whitechapel and Spitalfields.