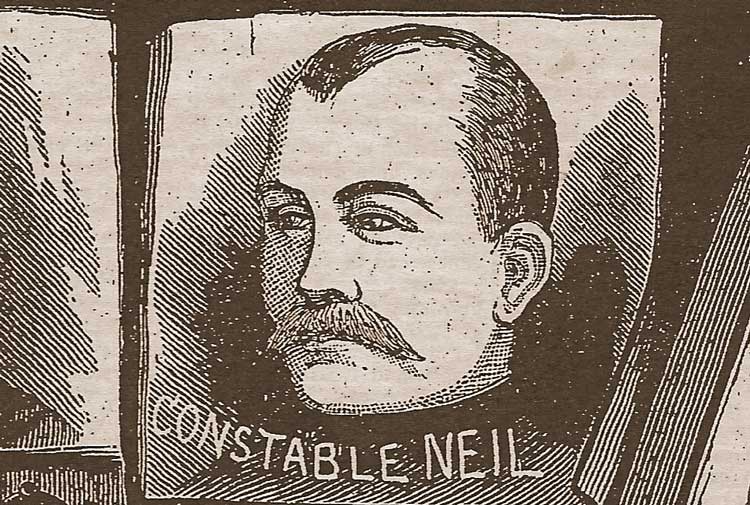 Police Constable John Neil was the first officer at the scene of the murder of Mary Nichols In Buck's Row on the morning of the 31st of August, 1888.

The East London Observer, published his inquest testimony in its edition of Saturday, 8th September, 1888.

John Neil, the police constable of the J division of police who found the body - a tall, fresh-coloured man, with brown hair, and straw coloured moustache and imperial.

He deposed that on Friday morning, at a quarter to four o'clock, he was going down Buck's Row, Whitechapel, from Thomas Street to Brady-street. Not a soul was about. He was round there about half an hour previously, and met nobody then.

The first thing he saw was a figure lying on the footpath. It was dark, but there was a street lamp on the opposite side some distance away.

The figure was lying alongside a gateway, of which the gate, nine or ten feet high, was locked. It led to some stables belonging to a Mr. Brown. From the gateway eastward the houses began, and westward there was a Board School. All the houses were occupied. The deceased's left hand was touching the gate.

Directly he turned his lantern on the body, he noticed blood was oozing from the woman's throat. She was lying on her back with her hands beside the body, the eyes wide open, the legs a little apart, and the hands open. Feeling her right arm he found it quite warm. Her bonnet was beside her on the ground. 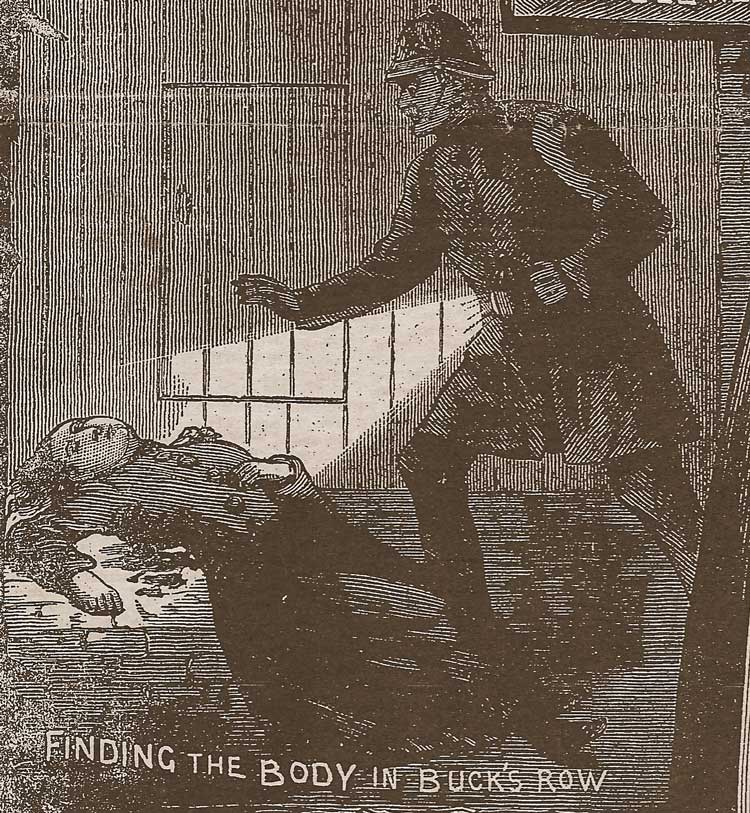 Without disturbing the body he called constable who was passing along Brady Street. He came, and the witness said to him:- "Here's a woman has cut her throat. Run at once for Dr. Llewellyn." He did so, and the witness seeing another constable pass along Baker's Row, sent him for the ambulance.

Dr. Llewellyn came in about ten minutes. In the meantime, the witness rang the bell at Essex Wharf on the opposite side of the street. A man appeared at a window, and, in answer to a question, said he had not heard any unusual noise.

Sergeant Kirby afterwards came and knocked at the door of New Cottage, adjoining the gateway. Mrs. Green answered from an upper window, and said that she had not heard any unusual noise.

The deceased was then placed on the ambulance and taken to the mortuary. There, Inspector Spratling came to take a description of the body, which he found was disembowelled.

They found no money on the woman, only a comb, a small piece of looking glass, and a white handkerchief, unmarked.

When the witness found the body, there was a pool of blood beneath the neck. He had not heard any noise that night. On the contrary, the place was unusually quiet, and nothing had aroused his suspicion. It was quite possible for somebody to have escaped though Brady Street or into Whitechapel Road, or through a passage in Queen's Buildings.

He never saw the deceased before finding her dead.

A quarter of an hour previously he was in Whitechapel Road where he saw some people apparently going to market, and some women,

Replying to a juryman, the witness added that he examined the place where he found the deceased, and saw no track of blood. It did not strike him that somebody might have brought the body in a trap, with the intention of throwing it on to the adjoining railway line.

There was a slaughterhouse near, in Winthrop Street, and two men who had ben working there all night, and whom he knew well, came into Buck's Row while the body was being put on the ambulance. They made no observation.

With the exception of a man who had passed down Buck's Row while the doctor was present, they were the first of the general public to arrive. They had just finished work, and were on their way borne. He had seen them and another man at work in the slaughterhouse when he passed it, about twenty minutes past three o'clock."