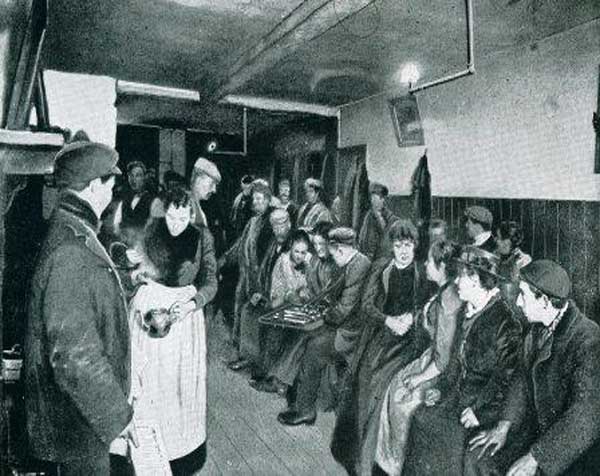 WHERE THE VICTIMS LIVED

All Jack the Ripper's victims lived in the relatively small neighbourhood to the east and west of Commercial Street on which social reformers had been focussing their attentions for several years.

A recurrent theme for tackling the social ills of this area which the Jack the Ripper Murders turned a spotlight on was the necessity to rid the district of the scourge of the Common Lodging Houses together with their lawless populace.

It didn't go unnoticed that two of Jack the Ripper's victims, Mary Nichols and Annie Chapman, had effectively been sent to their deaths as a result of their being evicted from the lodging houses at which they were staying because they lacked the four pence or eight pence to pay for their beds.

Three of Jack the Ripper's victims had, at one time or another, lived in the same lodging house in Flower and Dean Street, one of a group of adjacent thoroughfares known as the blackest of the black streets where vice, violence and villainy flourished.

HOW THE COMMON LODGING HOUSES WORKED

By law every one of these common lodging houses had to be licensed and was subjected to strict police supervision.

Each one had to display a placard in a prominent position stating the number of beds for which it was licensed, a number that was calculated on the basis of a minimum allowance of space per person.

Bed linen had to be changed weekly, and the windows had to be thrown open daily at 10am to ensure that the rooms were well ventilated.

Charles Dickens (son of the author of the same name), in his Dictionary of London for 1888, treated his readers to a rose tinted picture of these establishments that is strangely at odds with the descriptions given by the majority of commentators who visited them:-

In its way there are few things more striking, than the comparative sweetness of these dormitories, even when crowded with tramps and thieves of the lowest class."

Dickens does, however, concede that:-

The common sitting-rooms on the ground floor are not, it must be confessed, always equally above reproach."

Every lodging house had a common kitchen where the lodgers would gather and cook whatever food they had managed to buy, beg, steal or scavenge in the course of the day.

Most of the lodging houses were owned by middle-class entrepreneurs and investors, the majority of whom lived well outside the area and entrusted the day to day running of the businesses to "wardens" or "keepers." Many of these had criminal backgrounds and operated on the periphery of the law. They would turn a blind eye, probably in return for a share of the proceeds, to illegal activity and blatantly flouted the regulation stating that men and women, unless married, must be kept separate.

In a letter to the Daily Telegraph on 21st September 1888 a correspondent who signed himself "Ratepayer"; highlighted the problem. Referring to Thrawl Street, where Mary Nichols - Jack the Ripper's first victim - was lodging at the time of her murder, he wrote:-

...the population is of such a class that robberies and scenes of violence are of common occurrence. It is a risk for any respectable person to venture down the turning even in the open day. Thieves, loose women, and bad characters abound, and, although the police are not subject, perhaps, to quite the same dangers as they were a few years ago, there is still reason to believe that a constable will avoid, as far as he can, this part of his beat, unless accompanied by a brother officer..."

THE NUMBER OF LODGING HOUSES

His letter also revealed just how widespread the Common Lodging Houses were throughout the relatively small area that was bounded by Baker's Row to the east, Middlesex Street to the west and Whitechapel Road to the south:-

...There are no less than 146 registered lodging-houses, with a number of beds exceeding 6,000. Of these 1,150 are in Flower and Dean-street alone, and nearly 700 in Dorset-street. Some of the houses contain as few as four beds, whilst others have as many as 350. At a few of these men only are received, and at others women only, but in the majority there are what are known as "double-doss beds" ... there is little room to doubt the truth of the assertion that when these double beds are let no questions are asked, and the door is opened for the most frightful immorality..."

A GLIMPSE OF EVERYDAY LIFE

Hugh Edward Hoare, a wealthy philanthropist who took over the running of an East End Lodging House in 1886, has left us an intriguing glimpse of everyday life inside these dens of iniquity:-

...Passing the outer door, we found ourselves opposite a little window in a recess, where the "deputy," or manager, sits to collect the four pence for the night's lodging, and where he keeps the food which he sells to the lodgers. Passing through the second door, we enter a moderate-sized low "kitchen," where about twenty men and women were sitting on long wooden benches, or standing round the fire. An enormous red-hot coke fire...and a flaring gas-jet cast a cheerful light over the room, making even the white-washed walls and bare boards look comfortable and homelike. Plain long deal tables and benches were set round the room. On the chimney-piece were several tin teapots, and in a cupboard the coarse plates and cups and saucers for the free use of the lodgers..."

A case at Worship Street Police Court that was reported in the East End News on the 5th October casts light on the immorality and violence that was endemic in these establishments. Mary M'Carthy, "a powerful young woman" was charged with stabbing Ann Neason, the deputy keeper of the Spitalfields lodging house at which she was staying, in the face. The Magistrate, Mr. Montagu Williams Q.C, used his questioning of Ann Neason to launch a blistering attack on the common lodging houses:-

Mr. Williams: Is it one of the common lodging-houses one hears of?

Mr. Williams: Then tell me this - How many beds do you make up there?

Mr. Williams: By "doubles" you mean for a man and a woman?

Mr. Williams: And the woman can take any man she likes? You don't know if the couples are married or not?

Mr. Williams: Precisely what I thought. And the sooner these lodging-houses are put down the better. They are the haunt of the burglar, the home of the pickpocket, and the hotbed of prostitution.

QUEEN VICTORIA ASKED TO CLOSE THEM DOWN

At the height of the Ripper scare, on the 10th October 1888, Henrietta Barnett, wife of the Reverend Barnet of St Jude's Church Commercial Street forwarded a petition signed by four thousand "Women of Whitechapel" to Queen Victoria begging her to prevail upon "your servants in authority" to close down the Common Lodging Houses.

The petition was passed to the Home Office which asked the police to provide information on East End prostitution, brothels and the Common Lodging Houses.

THE NUMBER OF PROSTITUTES REVEALED

Based on the observations of the H division constables, whose beats took in the district to the west and east of Commercial Street, the police set the number of Common Lodging Houses at 233, the number of residents at 8,530 and the number of brothels at 62.

The police reply also stated that "we have no means of ascertaining what women are prostitutes and who are not, but there is an impression that there are about 1200 prostitutes, mostly of a very low condition."