JACK THE RIPPER AND THE SUPERNATURAL 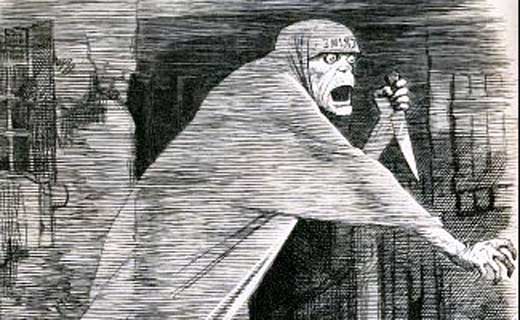 I would like to begin this article by revealing the identity of Jack the Ripper.

Jack the Ripper was a man who lived at 20 Wurt Street, London WC. and his name was Thomas Totson.

Of that I am certain.

How can I be so certain?

MR B. BARROCLOUGH AND HIS CRIME FIGHTING TABLE

Because Mr. Barroclough's table said he was!

Mr. B. Barroclough lived in York, so he was some distance away from the epicentre of the Whitechapel Murders.

But, at the height of the ripper crimes in London, he sent a telegram to the police in which he urged them to "watch the house at 20 Wurze Street WC."

So it was placed on the pile for filing in the bin at first possible opportunity, when two days later Mr. Barroclough sent another telegram to explain the first.

According to this second telegram, a few days before he had sent the original communication, he and his children had been enjoying a bout of TABLE RAPPING - a means by which the living could communicate with the dead.

Suddenly, in the midst of their rapping session a message had come through that announced MORE MURDERS TONIGHT IN LONDON.

Having informed them that the killer's name was Thomas Totson of 20 Wurt Street WC it urged them to CONTACT THE POLICE IMMEDIATELY.

This Mr. Barroclough had duly done.

The fact that there was no such address in the WC area of London meant that the police were unable to bring Thomas Totson in for questioning and so Mr Barroclough's communication joined the ever growing file of missives which was labeled "from madmen and lunatics."

To be fair to Mr Barroclough's crime hunting table some of the supposedly sane solutions and suggestions for tracking the ripper that the police were receiving at this time were, to say the least, decidedly odd.

The fact is that, the huge amount of press coverage being generated by the Whitechapel Murders was generating, coupled with the police's evident inability to capture the killer, meant that many people felt it their moral duty to get in on the act and advise the authorities on how the killer could best be brought to book.

If natural means were having no success in solving the crimes, then why shouldn't supernatural means be employed in the hunt for the killer?

On 6th October 1888 the East London Advertiser told its readers "If anything were wanted to heighten the horrors of these tragedies it was the introduction of the supernatural element."

But, by October 1888, there is little doubt that a "Supernatural element" had most certainly entered the case.

The most famous of these contemporary ripper dreamers was Mary Malcolm who contacted the police in the wake of Elizabeth Stride's murder on 30th September 1888 to say that she was convinced that the murdered woman was in fact her sister Elizabeth Watts.

Having twice viewed the body of Elizabeth Stride at the mortuary Mary Malcolm had identified the deceased as her sister from a black mark on her leg which, she said, was the result of an adder bite when they were children.

Mrs Malcolm duly appeared at the subsequent inquest and in the course of her testimony the Coroner asked her about a "SPECIAL PRESENTIMENT" that she had received.

In hushed tones Mary Malcolm launched into a tale of the supernatural by informing the Coroners Court how she had been lying in bed at around 1.20am on the previous Sunday when she suddenly felt a pressure on her breast and heard three distinct kisses in the air around her.

This made her, she said, sense that something had happened to her sister, Elizabeth Watts.

Consequently, when she heard of the murder in Berner Street, she contacted the police to tell them of her fears.

The East London Advertiser on 6th October 1888 informed its readers that this was around the time that the Berner Street victim was meeting her death and went on to opine that - "Since it is probable that her killer betrayed his victim Judas like with a kiss" this would account for the three kisses that Mrs Malcolm heard.

The pressure on her breast, the article explained, was consistent with where the murder would have placed his hand to steady himself as he leant over to slit her throat.

The newspaper went on to tell its readers how there were numerous records of people contacting their loved ones telepathically at times of great stress and this is what appeared to have happened in this case.

Mrs Malcolm went on to paint her sister in a very unflattering light accusing her late sibling of - among other things - adultery, bearing an illegitimate child by a police officer and even hinting that she was a prostitute.

THE POLICE DIDN'T BELIEVE HER

The amazing things is that she stuck to her story even though the police and the Coroner made it quite clear that they didn't believe a single word of it and that they were certain that the dead woman most certainly wasn't her sister.

Mary Malcolm's story was finally exposed as a fabrication when her sister actually hobbled in to court very much alive and denounced her for giving her such a "bad character."

What Mary Malcolm's motive was for persisting with her elaborate yarn is difficult to ascertain but her story of the dream had certainly caught the public imagination.

On 8th October The Star reported "A Spiritualist Clue" and told how, at a séance in Bolton the previous day, a medium claimed to have revealed the Whitechapel Murderer.

She described him as having "...the appearance of a farmer, though dressed like a navvy, with a strap around his waist and peculiar pockets. He wears a dark moustache and bears scars behind his ear and in other places. He will according to the medium, the article assured its readers be caught in the act of committing another murder. "

The publication Echo on the same day carried an even more sensationalist article about an "extra-ordinary statement bearing upon the Whitechapel tragedies" which had been made to the police in Cardiff on the previous day.

A "respectable looking elderly woman" who stated that she was a Spiritualist had, together with five others, held a séance on the Saturday just gone. They had attempted to summon the spirit of Elizabeth Stride and, after some delay, it came.

In answer to their questions she stated that her murderer was a middle aged man whose name she had mentioned and who resided at a given number on Commercial Street or Road. Liz's spirit ended her communication by informing the sitters that he BELONGED TO A GANG OF TWELVE.

Perhaps the award for the most suspect supernatural suggestion should go to the man who asked the police for locks of the murdered women's hair and, if this was not possible, for an "...item of clothing which they had been wearing close to their skin at the time of their murders..."

Apparently he had a friend who had succeeded in bringing to justice people who were guilty of cruelty to animals when there was no other evidence to convict them and he thought that this "friend" might be similarly successful in bringing the Whitechapel Murderer to justice.

DREAMING ABOUT JACK THE RIPPER

Meanwhile Jack the Ripper was continuing with his intrusions into the slumbers of sleepers both far and wide.

A Clergyman in Newmarket contacted the police to tell them that he had dreamt that there were in fact two killers and that their names were PAT MURPHY and JIM SLANEY.

His dream was most specific in that he was able to tell the police that they would be walking past 22 Gresham Street at precisely 4.10pm on Wednesday 28th November 1888. Would the police be kind enough to send a couple of detectives to Gresham Street at this time in order that these two perpetrators might be apprehended?

The Jack the Ripper correspondence continued to arrive well into 1889.

USELESS FOR ALL PRACTICAL PURPOSES

Indeed, in August of that year, The East London Observer gave its readers a glimpse of the type of mail that was arriving on the desk of Supt. Arnold at Leman Street Police Station.

"There are for instance," it told its readers, "no end of letters from Spiritualists and thought readers, who profess in some cases to have seen the spirits of one or other of the murdered women with whom they have entered into conversation as to the appearance of the murderer. The striking disparities evident, however, are sufficient on the face of them to condemn the letters and their writers as being absolutely useless for all practical purposes."

AS GREAT A MYSTERY TODAY AS IT EVER WAS

On 19th May 1892 The Pall Mall Gazette published and interview with the retiring Supt. of the City Police, Alfred Foster.

The interview contained a brief mention of the ripper crimes. Foster revealed that he had been interviewed by eminent Spiritualists and others on the subject of "Jack the Ripper's Mitre Square tragedy" - the murder of Catherine Eddowes on 30th September 1888.

Apparently these interviews had given him a great deal of hope at different times of "... lighting upon some clue."

"In fact," he observed wryly, "that crime is as great a mystery today as ever it was."