THE FUNERAL OF MARY NICHOLS 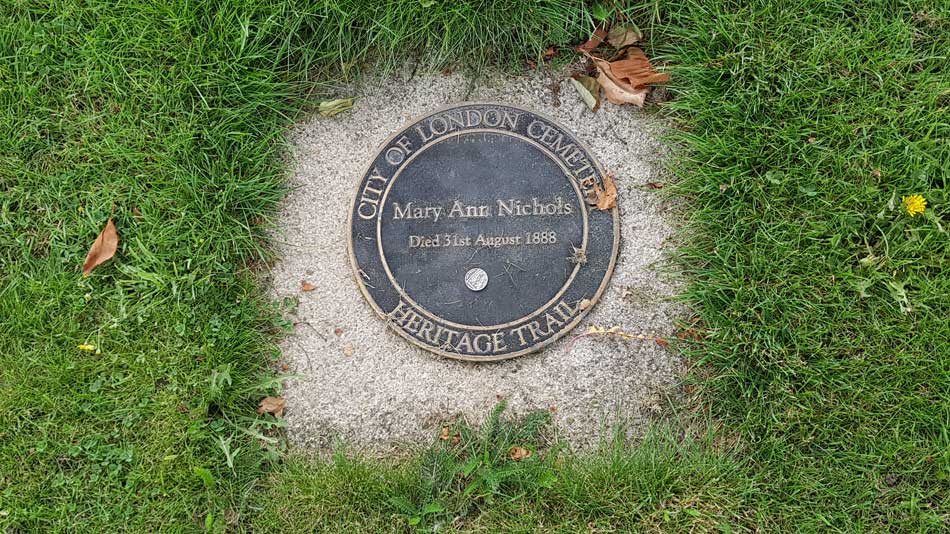 Mary Nichols's body was removed from the mortuary on Thursday, 6th September, 1888, and was taken to the undertaker in Hanbury Street.

Great secrecy was maintained concerning the arrangements for her funeral, which took place later that same day, in order to keep the curious crowds at bay.

However, things did not go quite according to plan as, due to the late arrival of the mourners, news of the impending funeral spread around the neighbourhood, and people began to make their way to Hanbury Street in order to view the coffin and read the inscription on the plate.

The Morning Advertiser carried a full report on the funeral in its edition of Friday, 7th September, 1888:-

The funeral of the unfortunate woman, Mary Ann Nichols, who was murdered in Bucks-row early on Friday last, took place yesterday. The arrangements were of a very simple character.

The time at which the cortege was to start was kept a profound secret, and a ruse was perpetrated in order to get the body out of the mortuary where it has lain since the day of the murder.

A pair- horsed closed hearse was observed making its way down Hanbury-street, and the crowds, which numbered some thousands, made way for it to go along Old Montague-street, but instead of doing so it passed on into the Whitechapel-road, and, doubling back, entered the mortuary by the back gate, which is situated in Chapman's-court.

No one was near, besides the Undertaker and his men, when the remains, placed in a polished elm coffin, bearing a plate with the inscription, Mary Ann Nichols, aged 42; died August 31, 1888, was removed to the hearse and driven to Hanbury-street, there to await the mourners.

These were late in arriving, and the two coaches were kept waiting some time in a side street.

By this time the news had spread that the body was in the hearse, and people flocked round to see the coffin, and examine the plate.

In this they were, however, frustrated, for a body of police, under Inspector Helston, of the H Division, surrounded the hearse and prevented their approaching too near.

At last the procession started towards Ilford, where the last scene in this unfortunate drama took place.

The mourners were Mr. Edward Walker, the father of the victim, and two of her children.

The procession proceeded along Bakers-row and past the corner of Bucks-row into the main road, where policemen were stationed every few yards.

The houses in the neighbourhood had the blinds drawn, and much sympathy was expressed for the relatives..."

There was a strange coincidence about the funeral of Mary Nichols.

As mentioned in the Morning Advertiser article, her body was removed from the mortuary via the back gate, which was located in Chapman's Court.

From here the coffin was taken to the undertaker's premises, which were situated in Hanbury Street.

Two days later, on the 8th of September, 1888, Jack the Ripper would claim the life of his next victim - Annie Chapman, whose body would be found in the backyard of a house in Hanbury Street.

BURIED IN THE CITY OF LONDON CEMETERY

Although her final resting place no longer exists, the Cemetery authorities do maintain a memorial plaque to her in the Cemetery's Garden of Remembrance, to which a regular stream of visitors make their way each year to pay their respects and spend a few moments in quiet contemplation.

Many of the visitors leave flowers and coins on the plaque (the coins are presumably in remembrance of the fact she lacked the fourpence for her bed on the day of her murder), and, in so doing, they ensure that Mary Nichols, murdered on August 31st, 1888, is not forgotten.

The Murder of Annie Chapman

1877 - She began to drink quite heavily and absconded from home on several occasions.

1880 - The couple separated, the children remaining with their father.

1882 - Her husband learnt that she was working as a prostitute and stopped paying her a maintenance allowance. She issued a summons for non-payment but lost her case on account of her immoral lifestyle.

24th March 1883 - 21st May 1883 - Lived with her father, until her excessive drinking led to friction between them. Following an argument, she moved out.

October - December 1887 - May have been one of the many destitute vagrants who were sleeping rough in Trafalgar Square. A Mary Ann Nichols appeared at Bow Street Court on charges of vagrancy, but we do not know for certain whether this was her.

16th April 1888 - 12th July 1888 - Employed as a live-in servant by Mr and Mrs Cowdry of Wandsworth. She absconded stealing some clothing when she went

2nd August 1888 - 24th August 1888 - Shared a room in a common lodging house at 18 Thrawl Street, Spitalfields. She shared a bed with Ellen Holland

31st August 1888, 12.30am Seen leaving the Frying Pan pub, at the junction of Thrawl Street and Brick Lane.

31st August 1888, 2.30am Emily Holland met her, the worse for drink, at the junction of Osborne Street and Whitechapel High Street. Mary boasted that she had made her "doss money" three times over, but had spent it. She refused to go back to the lodging house in Thrawl Street, and the two parted.

31st August 1888, 3.40am Charles Cross was making his way to work when he found her body lying in a gateway in Buck's Row, Whitechapel.