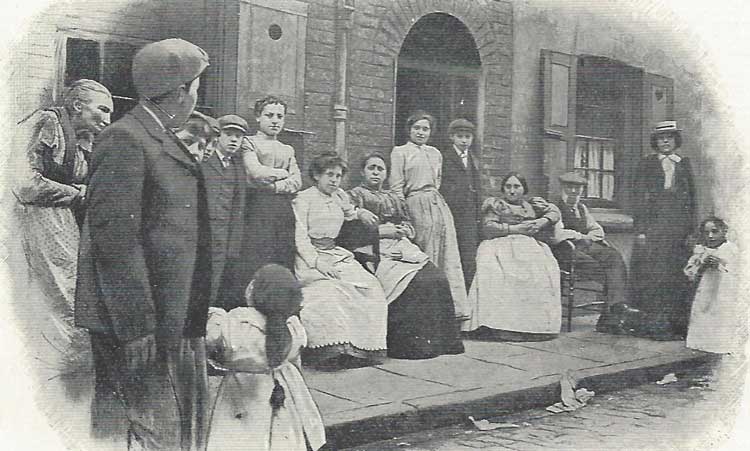 The Jewish immigrant community of Whitechapel and Spitalfields featured extensively in the Jack the Ripper story.

Many of the gentiles who lived in the area were convinced that the murderer belonged to this community and Sir Robert Anderson, the Assistant Police Commissioner, even went on record to state that the murderer was a low born Polish Jew living in the heart of the area.

Throughout the 1880’s there was a huge amount of Jewish immigration into the East End of London as, to fully understand the social setting against which the murders occurred, it is important to understand something about that immigration.

The steady stream of Jewish immigration of the first half of the 19th century began to gather pace in the second half and, by 1881, it had become a veritable flood.

In Russia, 1881 saw the assassination of Tsar Alexander, and this was followed by terrible pogroms in Kiev, Odessa and other cities.

Mass immigration of Jews and other minorities persecuted in the Tsarist Empire began.

This was fuelled over the next few years by increasing penal laws against Jews in Russia and reached a climax with the great pogrom of Kishinev in 1903.

The majority of the refugees had their hearts set on the "golden medina " - the United States - and many reached their goal.

But many others made it no further than England; either because they found friends, family or opportunities here, or because they lacked the resources to continue the journey.

NUMBER OF JEWS IN BRITAIN

In addition approximately 20,000 German, Austrian, Dutch and Rumanian Jews had also entered the country after the turn of the century.

It should be remembered that the census does not count children born in this country in the figures.

The Aliens Act of 1906 was a panic attempt to stop the influx of refugees, but a fortunate change of government meant it was not seriously applied. The war in 1914 brought the influx to a sudden halt.

THE SOUP KITCHENS AND OTHER MEASURES

Several steps were taken in response to the growing numbers of East European refugees arriving in the East End of London.

In 1857 a soup kitchen was founded in Brick Lane, Whitechapel and by January 1858 it was feeding an average of 1,000 people a week.

By the mid-nineteenth century, Anglo-Jewry had moved away from the original area of settlement in Aldgate and was to be found in Marble Arch, Canonbury, Dalston, and other havens of middle class tranquility.

The Aldgate area had become, as had the rest of the City, largely non-residential and filled with warehouses, offices and banks.

But, the district immediately east of Aldgate was about to become the Jewish area par excellence.

By 1914, 90 per cent of all Jews in England would live in the crowded streets and alleys of Whitechapel, Spitalfields and St George's in the East.

A ghetto was in formation.

Why did the refugees choose this area to settle in?

One reason was the presence of earlier poor Ashkenazi immigrants in the area; another was the existence of the soup kitchen.

Yet another was the existence from 1885 of the Poor Jews Temporary Shelter in Leman Street.

This institution was founded by Hermann Landau (1849-1921). An immigrant, having been born at Constantinov in Poland, he rose to become a Hebrew teacher and, later, a stockbroker.

Another attraction was the numerous chevrot (societies or clubs based on towns of origin) which existed to aid the newcomer.

WHY THE DISTRICT BECAME THE GHETTO

But two factors helped to determine that this district would become the ghetto.

Firstly, the majority of refugees arrived by steamer from Hamburg and these docked at Irongate Wharf by Tower Bridge (where the Tower Thistle Hotel now stands in St Katharine's Dock); it is a universal wisdom that immigrants first settle where they get off the ship.

Secondly, and most decisively, the East End in general was the least desirable part of town and, within the East End, the parishes of Spitalfields, Whitechapel and St George's were the least opulent of all. The immigrants had little choice but to settle here. They could not afford alternative accommodation, and would probably not be accepted as tenants elsewhere in the metropolis.

The Jewish communities which had arrived in earlier centuries were, or would become, middle class. But in the nineteenth century working-class Jews were arriving.

The earliest identifiable group of Jewish industrial workers were the Dutch Jews who settled in the Cobb Street, Leyden Street and Toynbee Street area of Spitalfields in the 1850s. It was among these workers, who were involved in the cigar and cigarette manufacturing industry, that the first strike of Jewish workers in England took place in 1858.

The East European refugees introduced three elements which had not hitherto been present to any extent in Anglo-Jewry: socialism, trade unionism and Zionism.

The Anglo-Jewish community had been very comfortable until the arrival of these strangers who dressed differently, spoke a foreign language (Yiddish) and carried their radical religious or political ideas with them.

They were not really welcome, but they were fellow Jews and so, initially, they had to be welcomed. But as early as 1882 the Board of Guardians of the Jewish Poor was taking advertising space in the Jewish press in Russia and Romania warning potential immigrants that if they came to England they would face great hardships and that the Board would give them no relief in the first six months of their residence.

The Board was swimming against the tide; the immigrants had faced a stark choice of choice life (if they left) or death (if they stayed). The hardships of England were as nothing compared to the hardships of home.

In 1885 Rudolf Rocker arrived in London. Rocker, a Roman Catholic by birth, came from Germany and was an anarchist. He had worked with Jews in Paris, where they were relatively prosperous, and was deeply shocked at the conditions he found in the East End. Rocker lived in St Dunstan's Buildings, Stepney Way, with a Jewish anarchist commune of 'chavarim' (comrades) who worshipped the very ground on which he stood.

An exceedingly energetic man, Rocker taught himself Yiddish and was the founder of the International Workers Educational Club in Berner Street (now Henriques Street) off the Commercial Road. It was in the yard that sided onto this club that the body of Elizabeth Stride, Jack the Ripper's third victim, was found on 30th September 1888.

Here, at the club which everybody called the "Anarchist Club", Rocker organized lectures by such socialist and anarchist superstars as Prince Peter Kropotkin, William Morris, Enrico Malatesta and Louise Michel.

There was a tea room (selling Russian tea) and a library, and Rocker would also organize children's trips to Hampstead Heath or lecture tours of the British Museum.

There were chevrot everywhere. In 1898 the Chevra Mikra is recorded at 46 New Court, Fashion Street. In 1894 the delightfully named Society for Chanting Psalms and Visiting the Sick is registered at 113 Old Castle Street. Even better is the chevra (without known address) called the Society For Giving Alms to the Poor To Avoid An Evil Death Society.

The Board of Guardians of the Jewish Poor (operating from its headquarters in Middlesex Street) did not encourage East Europeans to come to England in the first place. But, once they had arrived, the Board shouldered its responsibilities.

Between 1900 and 1910 it made 26,479 loans to the East End's Jews, averaging £7.00 per loan. The loans were interest free and repayable at six pence in the pound per week. They were made to people who wished to set up as independent traders or as their own masters.

By 1900 (when the Jewish population was at its height) the local community was talking of 'the North-West Passage' — i.e. people were moving out in an arc to the north and west of London; to Dalston, Stamford Hill, Golders Green, Hendon, Finchley and Edgware.

It is here that the active Jewish communities can be found today. Much had been done to encourage this movement and the cultural assimilation that accompanied it.

The Jewish East End and the Jack the Ripper Murders