HAD JACK THE RIPPER KILLED BEFORE? 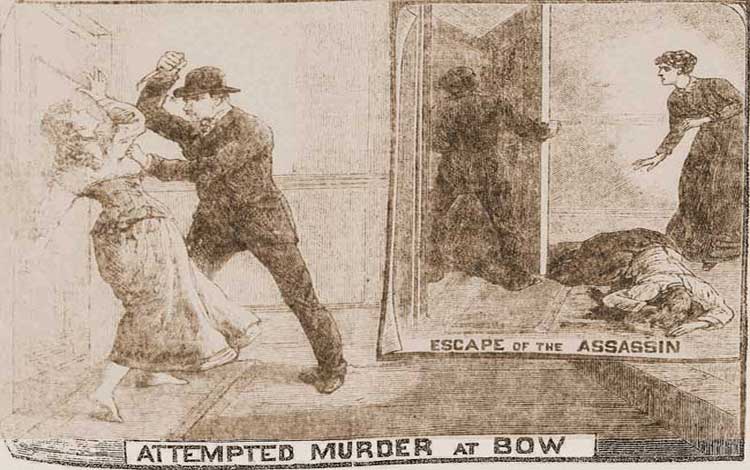 It is generally accepted today that Jack the Ripper had five victims.

But, the Whitechapel Murders File, under the generic heading of which the Jack the Ripper murders are included, actually consists of eleven murders.

Two of these occurred before the murder of the acknowledged first victim, Mary Nichols, on August 31st 1888, and four of them took place after the murder of Mary Kelly, on 9th November 1888, which, it is generally agreed, was the ripper’s final crime.

However, it is rare for a serial killer to just emerge suddenly and embark upon a killing spree. There is often a pattern whereby the killer graduates via attacks and assaults to full blown murder, wherein the distinctive modus operandi is established by which individual killings can be identified as the work of a particular murderer. There is a high probability that he would have committed earlier crimes such as assaults on women or even murder.

As it happens, the newspapers of the time had long realised that murderous attacks made good copy, and so papers such as the East London Advertiser, East London Observer, and Illustrated Police News went out of their way to bring their readers the salacious details of violent and murderous assaults that occurred in the East End in the months leading up to the start of the Jack the Ripper murders.

One of the first things to become apparent from trawling through the vast amounts of column inches dedicated to crime in the area is just how widespread violent assaults were at the time. Attacks on women were disturbingly commonplace, and several of these certainly bore elements that could be described as Jack the Ripper’s early work.

A CRIMINAL AND VIOLENT QUARTER

It should be remembered that the Jack the Ripper murders occurred in a part of London that suffered a very high rate of crime. Domestic violence was commonplace as were attacks on people in the streets.

Much of the areas inherent violence was a result of the drunkenness that was endemic in certain sections of East End Society. Other attacks were carried about by the sizeable population of lunatics and other fringe characters to whom the streets of Whitechapel and Spitalfields were the place of last resort.

Then of course there was robbery with violence as the district's sizeable criminal population went about their nefarious business, stealing from those who were less able to defend themselves.

So, violence wasn't uncommon in the area. Indeed such were the number of attacks that caused victims to cry "Murder!" that such cries were heard many times in a night and the populace at large had long grown use to ignoring such cries, believing them to be either the result of drunken brawls or domestic violence.

So, attempting to isolate particular cases of violence in an area that was rife with such cases is a little like trying to locate a needle in a haystack!

But, by looking in particular at stranger attacks, it is possible to point the finger at a handful of cases in the first half of 1888 which, if not carried out by Jack the Ripper, certainly bore similarities to his later crimes.

Ada Wilson - Another Early Victim of Jack the Ripper?