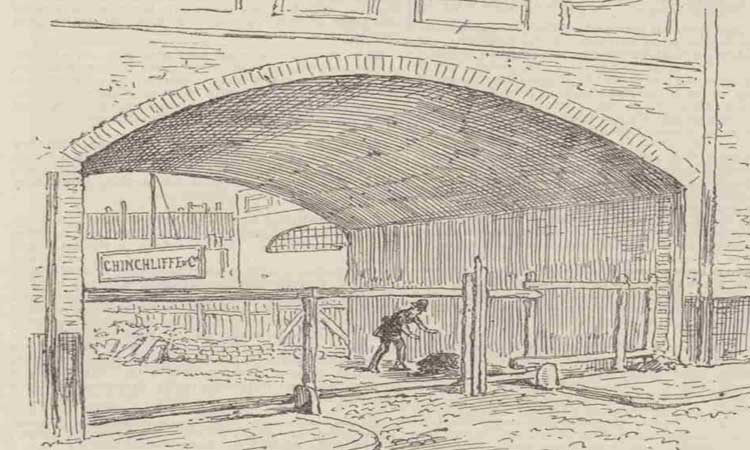 MURDER OF AN UNKNOWN WOMAN

On Wednesday 11th September 1889, under a sensationalist headline that ended "Mystery of Mysteries", The New York Herald told its readers that "London in general, and Whitechapel in particular, were thrown into a feverish state of excitement yesterday morning by the news that "Jack the Ripper" had murdered and mutilated his ninth victim. Both the murder and the mutilation were reported to be, and indeed proved to be, more horrible than in any one of the eight cases preceding..."

On the same day, Metropolitan Police Commissioner, James Monro, forwarded a seven page report to the Home Office regarding "...the finding of the trunk of a female, minus head & legs in one of the railway arches in Pinchin Street."

Monro then went on to explain that, "...This street is close to Berner Street which was the scene of one of the previous Whitechapel murders [that of Elizabeth Stride]. It is not a very narrow street, but is lonely at night, & is patrolled every half hour by a constable on beat. The arch where the body was found abuts on the pavement. The constable discovered the body some what after 20 minutes past five on the morning of Tuesday [10th September 1889]...He is positive that when he passed the spot about five the body was not there...It may therefore be assumed that the body was placed where it was found some time between 5 & 5.30 am...Although the body was placed in the arch on Tuesday morning, the murder - (and although there is not yet before me proof of the cause of death, I assume that there has been a murder) was not committed there nor then. There was almost no blood in the arch, and the state of the body itself showed that death took place about 36 hours or more previously. This, then enables me to say that the woman was made away with probably on Sunday night, the 8th September. This was the date on which one of the previous Whitechapel murders [that of Annie Chapman] was committed ..."

Had The Ripper Changed His Modus Operandi?

Inevitably, since the remains were found close to a previous murder site, and the killing itself had, possibly, taken place on the anniversary of a previous Jack the Ripper atrocity, the police had little choice but to consider the dreadful possibility that the ripper had returned.

Within hours of the remains being discovered, Chief Inspector Donald Sutherland Swanson was at pains to point out that the killer's modus operandi bore little resemblance to the modus operandi of Jack the Ripper. "What becomes most apparent," he stated, in a report dated 10th September 1888, "is the absence of the attack upon the genitals as in the series of Whitechapel murders beginning at Buck's Row and ending in Miller's Court. Certainly if it be a murder there was time enough for the murderer to cut off the head and limbs there was time to mutilate as in the series mentioned..."

Despite its lurid headline suggesting that the ripper had returned the Herald article, under a section headlined "A DIFFERENT METHOD OF MUTILATION", went on to opine, "A perusal of the circumstances of former atrocities of this nature only serves to confuse the reader's mind as to the possible origin of this last crime. It differs from the Whitechapel series in the facts that the head and lower limbs were amputated, and in the other fact that the hands were left undisturbed; but it resembles them in the infliction of the deep longitudinal cut along the lower half of the trunk..."

James Monro, in his report of the 11th September 1889, entered into a detailed comparison of this murder with the previous Whitechapel atrocities and observed that. "...If this a fresh outrage by the Whitechapel murderer known by the horribly familiar nickname of Jack the Ripper... this murder committed in the murderers house would be a new departure from the system hitherto pursued by this ruffian. I am however inclined to believe that this case was not the work of the "Ripper.""

Monro then went on to state that in the previous cases death had been caused by cutting the throat, whereas, in the case of the Pinchin Street victim, there was nothing to show that death was caused by the throat having been cut.

Whereas, in the previous cases, the bodies had been mutilated, in this latest case there was no mutilation "other than dismemberment".

Previous victims had suffered evisceration, but the Pinchin Street victim most certainly hadn't.

In several of the previous cases there had been removal of certain parts of the body, whereas with the Pinchin Street victim "There is no removal of any portion of the organs of generation or intestines..."

Concerning the location the previous murders, Monro pointed out that, they had all been committed in the street, "...except in one instance in Dorset Street [a reference to Mary Kelly's murder]" when, "...there were distinct traces of furious mania, the murderer having plenty of time at his disposal slashed and cut the body in all directions, evidently under the influence of frenzy."

Conceding that, in the respect of the indoor murder of Mary Kelly, the killing of the Pinchin Street victim had also been committed indoors, "...probably in the lodging of the murderer...", Monro went on to stress that, in the latter case, "...there is no sign of frenzied mutilation of the body, but of deliberate & skillful dismemberment with a view to removal...".

Monro then went on to point out that "These are all very striking departures from the practice of the Whitechapel murderer, and if the body had been found elsewhere that in Whitechapel the supposition that death had been caused by the Ripper would probably not have been entertained..."

In conclusion, Monro stated that, " I am inclined to the belief that, taking one thing with another, this is not the work of the Whitechapel murderer..."

Today, experts on the case are inclined to agree with Monro's assessment that the Pinchin Street murder was not carried out by Jack the Ripper, but that it may well have been linked to another series of crimes that included the Whitehall Mystery of 1888.

At the subsequent inquest into the woman's death, the Coroner, Wynne Baxter, pointed out that there was "...no evidence as to the identity of the Deceased; but that the statements of the medical gentlemen in the case showed clearly that the woman had died a violent death."

He also observed that, " It was a matter of congratulation that the present case did not appear to have any necessary connection with the previous murders in the immediate neighbourhood."

On 5th October 1889 the remains were laid to rest in the East London Cemetery, Grange park, Plaistow, Essex. The metal plate that adorned the case in which they were interred carried the simple inscription, "This case contains the body of a woman (unknown) found in Pinchin Street St Georges-in-the-East 10th Septr./89"