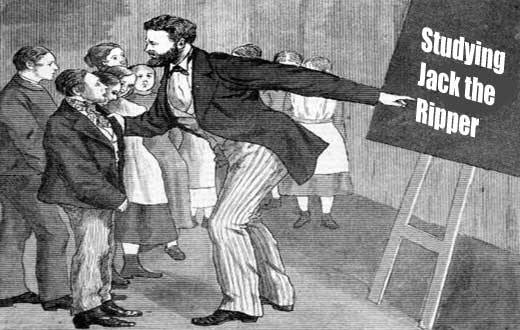 On this page we will endeavour to answer any questions from those who are studying the Jack the Ripper murders as part of a history, criminology or psychology course.

If you do have any questions that you wish to have answered then please get in touch via our contact page.

We will post the answer here as soon as possible, though please be aware that, owing to other commitments, it might take a week (sometimes longer) before the question is answered.

However, we hope that this section will soon grow to become a useful resource, not just for those studying the Jack the Ripper murders as part of their coursework, but also for those who have and interest in the Whitechapel Murders in general.

JACK THE RIPPER QUESTIONS AND ANSWERS

Did the social conditions in Whitechapel, London at the time impact the Jack the Ripper murders?

Whether or not the social conditions impacted on the murders themselves is a difficult question to answer.

Certainly the lack of adequate welfare for the poor and destitute had resulted in the majority of the victims being forced to lead transient lives in the area's Common Lodging Houses and supplementing their livelihoods by resorting to prostitution.

This, in turn, enabled the ripper to find victims who, desperate to find the money to pay for the bare necessities, had little choice but to go with him into the dark corners of the badly lit backstreets where it was easy for him to murder them without fear of interruption.

There is also the fact that the parts of the area in which the crimes occurred, were not lit by night, which aided him to carry out his crimes and then to escape unseen.

Finally, there is the fact that many came to see Jack the Ripper as an inevitable result of the appalling social conditions that had been allowed to fester, unchecked, in the districts of Whitechapel and Spitalfields for decades.

The murders impacted Victorian society in several ways, which was the most far reaching?

The most far reaching consequence of the Jack the Ripper murders was probably that they focused attention on the appalling social conditions that had been allowed to develop in the area.

They also helped create a universal impression of the East End of London as being slum land London and a hotbed of vice and villainy.

Whereas the East End, most certainly, did have its "problem" streets and enclaves, so too did many other parts of Victorian London but, thanks to the publicity generated by the Whitechapel Murders, the East End came to be associated with worst living conditions imaginable.

How did the Jack the Ripper murders serve as a force for change?

The Whitechapel Murders acted as a force for change in several respects.

Firstly, thanks to the newspaper reporting, inquest testimonies and activities of the philanthropists, they made the public at large more aware of the appalling social conditions in the slums of Victorian London.

Secondly, they helped change police investigative techniques - you can most certainly see early CSI developing as the murders progressed.

Thirdly, the fact that the backstreets of the area had such poor night time lighting was brought to the fore my the murders and this also changed within a few years.

To the wealthier citizens in Western London, what did Jack the Ripper symbolize?

The 19th century was a period of great political upheaval in Europe, and the 1880's had seen a huge amount of social unrest in London.

People were already starting to look nervously towards the East End of London as sections of the population were becoming quite vociferous in their criticism of the social and living conditions in the area.

Jack the Ripper turned up at just the right time and in just the right place and so, to many of those who dwelt in the wealthier sections of London - and the rest of the country for that matter - he came to represent all of the nebulous fears and prejudices that were already forming in their minds about the East End.

When he crossed the boundary and murdered Catherine Eddowes in the City of London a psychological boundary was crossed in the minds of many of the middle and upper classes.

If the ripper could cross that boundary, then so too could all those other aspects that the middle and upper classes feared so much.

So Jack the Ripper symbolised all the fears that the wealthier citizens possessed. He was, effectively, their worst nightmare made real.

What were Jack the Ripper's motives in killing these women?

There has been endless speculation concerning the motives of Jack the Ripper.

One theory is that he was waging a war on sin and was trying to rid the area of prostitution.

Another holds that he was they, i.e. The Freemasons attempting to suppress a royal scandal that involved Prince Albert Edward Victor.

The probability is, however, that he had no motive as such. He was a sick individual, living in the area, who people probably thought was a little strange, but otherwise harmless, and then, every so often, the voices in his head would start up and he would go out and murder one of the easiest targets available in the area - the local prostitutes.

What if Jack the Ripper was a woman?

There have, over the years, been many suggestions that the Ripper was, in fact, a woman and this would explain why his victims were willing to go with him/her into the dark corners of the dark locations where the murders occurred.

One theory is that the killer was a local mid-wife abortionist and the killings were not murders but were bungled abortions made to look like murders.

Another theory, which was said to have been held by Sir Arthur Conan Doyle, the creator of Sherlock Holmes, is that the killer disguised himself as a woman to escape from the scenes of the crimes.

However, it should be remembered that, these types of murders are largely carried out by men.

Why didn't the police look at butchers as possible suspects?

The police did look at the possibility that the killer was a local butcher or slaughter man, and this came up several times at the inquests into the deaths of several of the victims.

One of the more unpleasant tasks that many of the police officers who worked on the case later commented on, was when they were ordered to search every butchers shop and slaughter house in the neighborhood and interview every one of their employees.

Many officers recalled that they could still remember vividly the foul smells of these places years later.

Were the injuries to Catherine Eddowes body so severe because he had been interrupted in the earlier killing of Elizabeth Stride?

Again, this is something that many commentators have wondered about.

If, as seems likely, he was interrupted before he could carry out his intended mutilations of the body of Elizabeth Stride, he might have been frustrated by the time he met Catherine Eddowes 30 minutes later, and this, so the theory goes, would account for the increased ferocity of the mutilations inflicted on her body.

If you are studying the Jack the Ripper crimes and would like to ask any questions please send your questions via contact page and we will answer your question on this resource page.