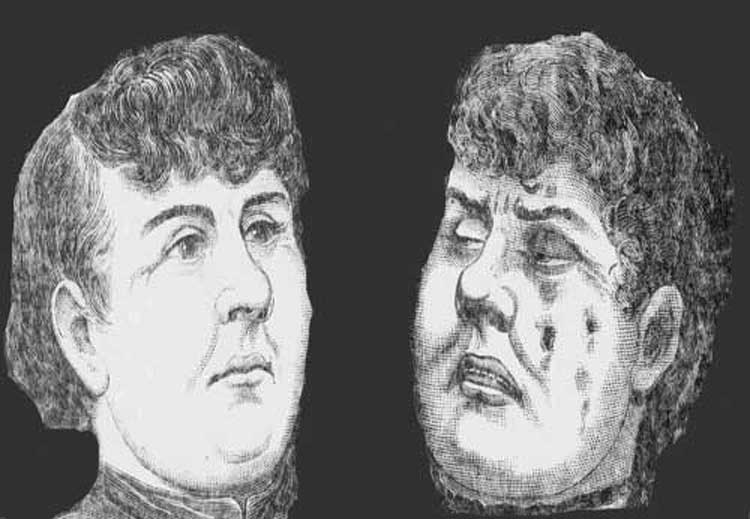 Annie Chapman (1841 - 1888) led a somewhat nomadic existence around Spitalfields. She was 47 years old at the time of her death, a short plump, ashen-faced consumptive who, for four or so months prior to her death, had been living at Crossingham's lodging house at number 35 Dorset Street where she paid eight pence a night for a double bed.

She appears to have enjoyed a cordial relationship with the other tenants and the deputy keeper, Timothy Donovan, remembered her as being an inoffensive soul whose main weakness was a fondness for drink.

Like many of the women in the area Annie supplemented the meager income she obtained from crochet work and making and selling artificial flowers with prostitution.

She had two regular clients, one known as Harry the Hawker, and the other a man named Ted Stanley, a supposed retired soldier who was known to her fellow lodgers as "the Pensioner."

WHO WAS "THE PENSIONER"

As it later transpired, Stanley was neither a retired soldier nor a pensioner, but was in fact a bricklayer's labourer who lived at number 1 Osborn Place, Whitechapel.

According to Timothy Donovan, Stanley would frequently spend Saturdays to Mondays with Annie at Crossingham’s.

He also claimed that Stanley had told him to turn Annie away should she ever arrive at the lodging house with other men. Stanley, however, vehemently denied this and claimed to have visited Annie only once or twice. 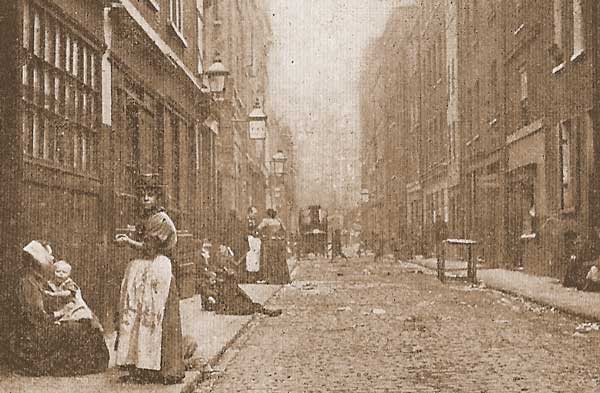 AN ARGUMENT AT THE LODGING HOUSE

Whatever Annie's relationship with the "Pensioner" he seems to have been the cause of the only trouble that Timothy Donovan could remember her being involved in during all her time at Crossingham’s.

At some stage in the month before her death, (different witnesses remembered different dates) there had been a fracas between Annie and fellow lodger Eliza Cooper.

The full details of the argument told by the different witnesses are confusing and contradictory, with some even claiming that Harry the Hawker was the cause.

According to Eliza Cooper in her inquest testimony she had loaned Annie Chapman a bar of soap which Annie had given to Ted Stanley who then went to wash with it. Over the next few days Eliza asked several times for the return of the soap, only to be dismissed by Annie who on one occasion contemptuously tossed a ha'penny onto the lodging house kitchen table and told her to "Go and get a halfpenny of soap."

The animosity was still evident when the two women met a few days later in the Britannia pub on the eastern corner of Dorset Street. However, on this occasion, Annie slapped Eliza across the face screaming as she did so, "think yourself lucky I don't do more." Eliza retaliated by punching Annie in the eye and then hard across the chest. Annie appears to have come off worse from the exchange of blows and the bruises she sustained were still evident when Dr Phillips carried out her post mortem.

Of course it should be remembered that this is the account given by Eliza Cooper at Annie Chapman's inquest and she was no doubt anxious to portray herself as the injured party. 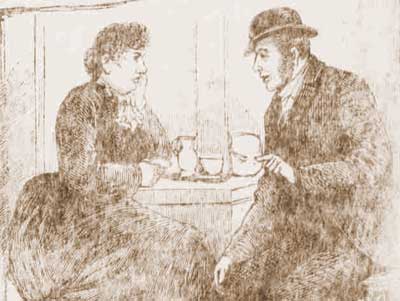 Annie Chapman At The Lodging House 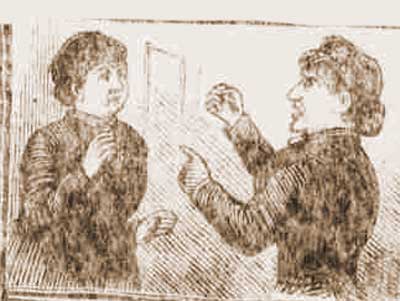 ANNIE CHAPMAN BRUISED AND IN PAIN

Whatever the cause of the argument, Annie Chapman's last days were spent bruised and in pain, her health rapidly failing.

On Monday 3rd September, when she met her friend Amelia Palmer on Dorset Street, the bruising to her right temple was more than evident. "How did you get that?" Amelia Palmer asked. Annie's response was to open her dress and show her the bruising on her chest.

Amelia bumped into Annie again the next day close to Spitalfields church and commented on how pale she looked. Annie told her that she felt no better and that she might admit herself to the casual ward for a few days. When Amelia asked if she had had anything to eat that day Annie replied "No, I haven't had a cup of tea today." Amelia handed her two pence to buy some food and warned her not to spend it on rum.

ONE OF THE LAST SIGHTINGS

She looked even worse and complained of feeling "too ill to do anything."

She was still standing in the same place when Amelia passed her again ten minutes later, although she was now trying desperately to rally her spirits. "It's no use giving way, I must pull myself together and get some money or I shall have no lodgings," were the last words Amelia Palmer heard Annie Chapman speak.

1st May, 1869 - Married John Chapman at All Saints Church, Knightsbridge.

1880 - A son, John Alfred Chapman was born. Sadly, John was a cripple and was put into a home.

1884 or 1885 - The couple separated and Annie returned to live in London. John, off and on, continued to support her with a sporadic allowance of 10 shillings a week.

1886 - Annie took up with a sieve maker by the name of John Sivvey and the couple moved into a common lodging house at 35 Dorset Street, Spitalfields.

25th December, 1886 - John died of cirrhosis of the liver and, thereafter, the allowance ceased.

January, 1887 - Sivvey broke off their relationship and moved to Notting Hill.

From May, 1888 - Annie was an almost permanent resident at Crossingham's lodging house, 35 Dorset Street, Spitalfields.

June - September, 1888 - Annie was involved in a relationship with Edward Stanley, a bricklayer's assistant, of 1 Osborn Place, Whitechapel. The couple would spend weekends together at Crossingham's lodging house.

Late August, 1888 - She met her brother, Fountain Smith on Commercial Road, Whitechapel and told him that she was "hard up." She refused to tell him where she was living. He gave her two shillings.

September 1st, 1888 - Stanley returned to the area and met her at the corner of Brushfield Street.

Early September, 1888 - Annie had a fight with fellow lodger Eliza Cooper and was left with a black eye and bruising to the chest.

September 3rd, 1888 - Amelia Palmer met her in Dorset Street and commented on her black eye and bruised right temple. Annie opened her dress and showed her the bruising on her chest. She told Amelia that she was feeling unwell and that she might go and see her sister to get a pair of boots so that she could go hop picking.

September 4th, 1888 - Amelia Palmer met her again, near Christchurch on Commercial Street. Annie complained of feeling extremely unwell, and said that she might go to the casual ward for a few days to recover. She mentioned that she had not had anything to eat or drink all day, and Amelia gave her two pence, warning her not to spend it on rum.

September 7th, 1888, 11.30pm - Annie turned up at Crossingham's lodging house, on Dorset Street, and asked if she could sit in the kitchen, a request that was granted.

September 8th, 1888, 1.35am - She went to the office of the deputy lodging house keeper, Timothy Donovan, and explained that she had no money to pay for her bed for that night. He told her that if she couldn't pay she couldn't stay, and she left, vowing to return shortly with the money and urging them to see that they keep her bed.

September 8th, 1888, 5.30am - Mrs Elizabeth Long was walking along Hanbury Street, Spitalfields, when she passed Annie Chapman talking to a man, directly outside number 29 Hanbury Street. She heard the man say "Will you?", to which Annie replied "Yes."