THE FROM HELL LETTER - RECEIVED BY GEORGE LUSK

CATCH ME WHEN YOU CAN

A constant theme running through the Jack the Ripper correspondence was that the writer [who invariably was purporting to be the killer] would send a body part from one of his victims to the police.

The initial Dear Boss letter had, for example contained the threat The next job I do I shall clip the ladys ears off and send to the police officers just for jolly wouldn't you.

However, the letters that arrived in the wake of the original Jack the Ripper missive, contained only, among other artworks crude drawings of female forms with jagged cuts helpfully illustrating where on the bodies the author would make his incisions or mutilations.

MR. GEORGE LUSK IN THE PRESS

But then, in mid-October 1888, a letter arrived that actually made good on the threat and, with the additional salacious suggestion that the killer had also indulged in cannibalism, it added an extra level of gruesome melodrama to the Jack the Ripper mystery.

The butt of this particular prank letter was Mr. George Lusk, who was the president of the Mile End Vigilance Committee.

Mr. Lusk had been constantly in the newspapers in the first two weeks of October on account of his Vigilance patrol activities. In addition, he had also addressed several public meetings and had been actively soliciting the Home office urging them to rethink their stand on not offering a reward for information that might lead the killer to be identified.

The resultant press coverage had ensured that his name was constantly in the public eye throughout the first two weeks of October and it didn't take long for a few of the east End's more unsavoury characters to latch on to him and begin stalking him.

At 4:15pm on Thursday 4th October 1888, a man, who the newspaper reports described as having a "florid" appearance, turned up on Mr. Lusk's doorstep.

The stranger was about 5 feet nine in height and was aged between 30 to 40. He sported a bushy brown beard and had whiskers and a moustache.

The man was told that Mr. Lusk was at a nearby tavern that was kept by his son.

So the man headed round to the tavern and, having located Mr. Lusk, subjected him to a barrage of questions about the beats taken by the members of the Mile End Vigilance Committee.

He then "attempted to induce Mr. Lusk to enter a private room with him."But", as the News of The World reported:-

The stranger's appearance however was so repulsive and forbidding that Mr. Lusk declined, but consented to hold a quiet conversation with him in the bar-parlour. The two were talking, when the stranger drew a pencil from his pocket and purposely dropped it over the side of the table saying, "Pick that up." Just as Mr. Lusk turned to do so he noticed the stranger make a swift though silent movement of his right hand towards his side pocket, and seeing that he was detected assumed a nonchalant air, and asked to be directed to the nearest coffee and dining-rooms. Mr. Lusk directed him to a house in the Mile End-road, and the stranger quietly left the house, followed by Mr. Lusk who went to the coffee-house indicated, and found that the man had not been there, but had given his pursuer the slip by disappearing up a court...”

On 10th October another suspicious looking man was seen lurking outside Mr. Lusk's house. Lusk reported this particular character to the police who duly circulated a description of him.

Two days later Mr. Lusk received a letter that, reportedly, was written in a similar hand to that of the Dear Boss missive.

I write you a letter in black ink, as I have no more of the right stuff. I think you are all asleep in Scotland-yard with your bloodhounds, as I will show you to-morrow night (Saturday). I am going to do a double Event, but not in Whitechapel. Got rather too warm there. Had to shift. No more till you hear me again.

George Lusk was, doubtless, becoming decidedly unnerved by the amount of attention he was beginning to receive from the more unsavoury elements of East End society.

His nervousness no doubt increased when a taunting postcard arrived in the mail:-

You seem rare frightened, guess I'd like to give you fits, but can't stop time enough to let your box of toys play copper games with me, but hope to see you when I don't hurry much

On 15th October a Miss Marsh was working behind the counter in her father's leather shop at 218 Jubilee Street - close to the London Hospital - when a man dressed like a cleric entered.

He was particularly interested in the Vigilance Committee's reward poster that was displayed in the shop window and he questioned her about the address of Mr. George Lusk.

Miss Marsh told him to ask at the nearby Crown pub, but the man told her that he didn't want to go to a pub.

She, therefore, got out a copy of a recent newspaper and found a report that mentioned Lusk's street but which omitted his house number. This she read out whilst the man took it down in a notebook.

According to Miss Marsh, the man was of slim build, was about forty-five years of age and around 6-foot tall. He had a sallow complexion, with dark beard and moustache. He spoke with what she took to be an Irish brogue.

Shortly afterwards, on Tuesday October 16th 1888, a small package, wrapped in brown paper and bearing an indistinct London postmark was delivered to Lusk in the evening post. It was addressed to him by name and bore the name of the street, but did not give his house number.

The parcel contained a foul smelling piece of kidney together with a letter, the handwriting of which was the same as that of the post card Lusk had received a few days before.

signed Catch me when you Can

PERSUSE THE FROM HELL LETTER 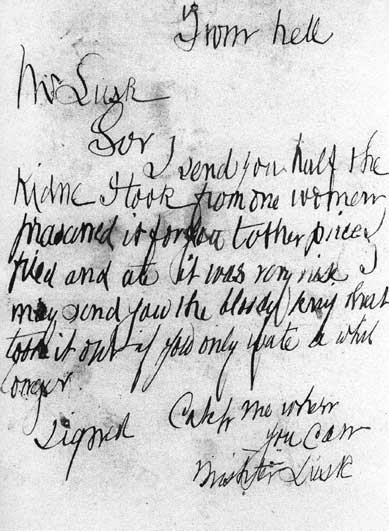 Lusk's initial reaction, aside from cringing in disgust, was to dismiss it as just another sick prank and he presumed that the kidney was that of a sheep or some other animal.

His doubts notwithstanding however, he sought the opinions of the other Vigilance Committee members, including the Committee's Treasurer, Joseph Aarons.

As it transpired, none of them shared his opinion that the grisly package was a prank.

The general consensus was that they should seek a medical opinion and so the kidney was taken to Dr Frederick Wiles's Mile End Road surgery.

Although Wiles was not there, his assistant Dr Reed examined the kidney and gave it as his opinion that it was human.

THE KIDNEY IS TAKEN TO DR OPENSHAW

However, Reed thought it advisable to seek a second opinion and the kidney was duly taken to the London Hospital where Dr Thomas Openshaw, the Pathological Curator, examined it.

Openshaw's findings would become the subject of much press debate, not to mention misreporting in the days that followed, and Openshaw would become so alarmed by inaccuracies that would appear in various newspapers that he would go on record to correct them.

Ultimately, the subsequent press coverage would encourage another Jack the Ripper letter writer to target Openshaw with his very own prank letter.