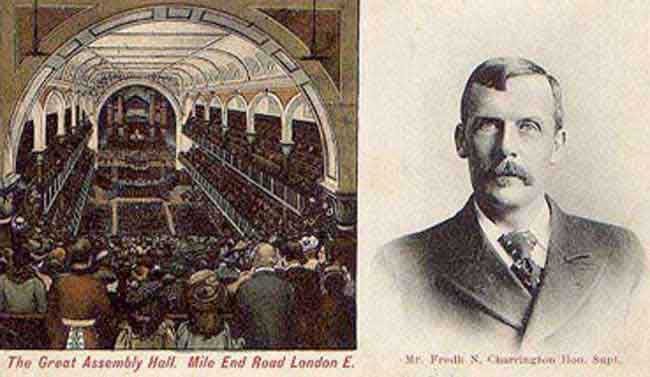 HIS BATTLE AGAINST VICE

Born in Bow Road in the East End of London on the 4th February 1850, Frederick Charrington was the son and heir of a partner in one of London's largest breweries, the Charrington Brewery.

In his late teens, he underwent a conversion and became an evangelical Christian.

A year or so after his conversion, Frederick Charrington was walking through Whitechapel when he encountered a woman in ragged clothing who was standing outside a pub with her, equally ragged, children.

As he approached, he saw the woman pop her head around the door of the pub and call to her husband, who was drinking inside, to come out and give her some money so that the children could eat that night.

Suddenly, the man stormed out in a furious rage and proceeded to knock the woman to the ground.

Charrington intervened and attempted to stop the man assaulting his wife, but he himself was struck and was also knocked to the ground.

Looking up, he saw, to his horror, the name of Charrington above the pub's door. "When I saw that sign,' he later wrote, "I was stricken just as surely as Paul on the Damascus Road. Here was the source of my family wealth, and it was producing untold human misery before my own eyes. Then and there I pledged to God that not another penny of that money should come to me."

DEVOTED HIMSELF TO THE EAST END POOR

He promptly went home and informed his father that he wanted nothing more to do with the family business, telling him that he was going to devote himself to improving the living conditions of the East End poor.

He was as good as his word and, over the next few years, he opened a school in the district; campaigned to clean up the Music Halls; and also became a keen member of the Temperance movement.

He also opened The Great Assembly Hall in Mile End, a huge undertaking, which could accommodate some five thousand East Enders and which was crammed to the rafters on Sundays, when the local poor and destitute would arrive to enjoy tea and sustenance, prior to attending the evening service.

MISSION TO CLOSE DOWN THE BROTHELS

Throughout the winter of 1887/88 Frederick Charrington spearheaded a determined campaign to rid the East End of vice.

He abhorred the number of brothels in the area and used the Criminal Law Amendment Act of 1885, - under the terms of which a citizen could report any house suspected of operating as a brothel to the police in return for a reward - to launch his own private crusade to close them down.

Armed with a large black book to note down suspect houses, Charrington cut a swathe through the East End flesh trade that saw brothel after brothel closed down. Indeed, according to his biographer, Guy Thorne, he succeeded in closing down around 200 East End brothels.

"..the bullies [pimps], the keepers of evil houses, the horrible folk who battened on shame, and enriched themselves with the wages of sin, feared Frederick Charrington as they feared no policeman, no inspector, no other living thing..."

His onslaught into the "foulest sinks of iniquity" resulted in at least one startling revelation for Charrington himself.

He had learnt that a girl was being kept against her will at a certain brothel and set out to rescue her in the company of two detectives who were disguised as water inspectors.

They quickly gained admittance and the girl was duly saved.

But, on searching the rest of the house, he was astonished to find a large portrait of himself staring down from the wall of the main reception room. The detectives informed him that every brothel in the east End possessed a similar portrait as the keepers wished to be able to identify the man who was doing their trade so much harm!

DIRE CONSEQUENCES FOR THE PROSTITUTES

But his campaign, however well meaning, had dire consequences for the displaced prostitutes, who were either forced to move to other areas - thus, as one newspaper correspondent put it, "spreading the moral contagion," - or else had little choice but to solicit on the streets in all weathers.

The latter generated a great deal of criticism in the letters columns of the local newspapers. Charrington was accused of adding to the misfortune of women who had already been "gravely wronged by men."

EASY TARGETS FOR JACK THE RIPPER

His evangelical endeavours would be one of the reasons why so many women had little choice but to risk their lives on the streets of the East End in the autumn of 1888, since the brothels, however bad the majority might have been, would at least have afforded them some protection from the threat of being butchered by Jack the Ripper.