THE DEAR BOSS LETTER - YOURS TRULY JACK THE RIPPER

THE BIRTH OF A LEGEND

The name "Jack the Ripper" didn't enter the investigation until after the night of the so-called "double murder" of Elizabeth Stride and Catherine Eddowes on 30th September 1888.

Up until that point the killer had been known variously as the "Red Fiend", "The Whitechapel Murderer," and "Leather Apron."

It was the arrival of a gloating letter posted to a London news agency in later September 1888 that would introduce the name 'Jack the Ripper' into the saga.

The letter in question was received by the Central News agency at their premises in the City of London on 27th September 1888.

At first the staff of the news agency weren't too concerned about the letter, and it would be two days before, on September 29th, they would decide to pass it on to the Metropolitan Police.

The letter, written in a boastful tone, was addressed to "The Boss, Central News Office, London, City."

I keep on hearing the police have caught me but they wont fix me just yet. I have laughed when they look so clever and talk about being on the right track. That joke about Leather Apron gave me real fits. I am down on whores and I shant quit ripping them till I do get buckled. Grand work the last job was. I gave the lady no time to squeal.

How can they catch me now. I love my work and want to start again. You will soon hear of me with my funny little games. I saved some of the proper red stuff in a ginger beer bottle over the last job to write with but it went thick like glue and I cant use it. Red ink is fit enough I hope ha ha. The next job I do I shall clip the ladys ears off and send to the police officers just for jolly wouldn't you. Keep this letter back till I do a bit more work, then give it out straight.

My knife's so nice and sharp I want to get to work right away if I get a chance.

Dont mind me giving the trade name. Wasnt good enough to post this before I got all the red ink off my hands curse it No luck yet. They say I'm a doctor now. ha ha” 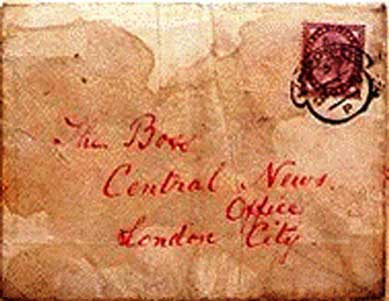 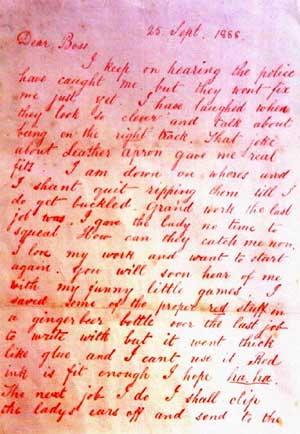 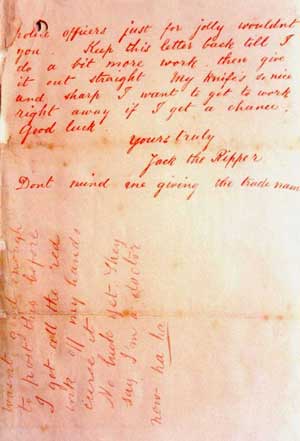 The police were initially sceptical about this piece of correspondence actually having been written by the killer and believed it to be a hoax.

But, within a day of the agency having passed it to them, two more women - Elizabeth Stride and Catherine Eddowes - were murdered in the early hours of the 30th September.

The police found themselves with little choice but to take a closer look at what "Jack the Ripper" had written.

The statement "I want to get to work right away if I get a chance", given that he had apparently done just that, apparently backed up the author's claim that he was the murderer.

Meanwhile, the threat to "clip the ladys ears off and send to the police officers"; when her killer had indeed mutilated Catharine Eddowes's earlobes was, so the police thought, a bit too prophetic for them to dismiss it as an idle boast.

Furthermore, with their investigation floundering, and press criticism of their lack of progress increasing, they desperately needed a breakthrough in their hunt for the killer. Perhaps this letter would provide that sought after breakthrough?

THE POLICE RELEASE THE LETTER

So, on the 1st October, the police made the Dear Boss letter public and, in so doing, the escapades of an unknown East End murderer and his sordid set of crimes were given a gruesome immortality and, as a result, an almost bizarre element of melodrama entered the case.

ANOTHER LETTER IS RECEIVED

In the early mail on Monday October 1st, a postcard that was written in a similar handwriting to the "Dear Boss" letter, arrived at the Central News Agency.

This too was scrawled in red ink but, in addition, there were what appeared to be bloodstains on it.

The writer had not put a date on the postcard but it did bear the postmark LONDON E, and this was dated the 1st of October.

If the author was not the same writer responsible for the "Dear Boss" letter, there was little doubt that he was at least familiar with the contents of that missive.

I was not codding dear old Boss when I gave you the tip, you'll hear about Saucy Jacky's work tomorrow double event this time number one squealed a bit couldn't finish straight off had not the time to get ears for police. thanks for keeping last letter back till I got to work again. 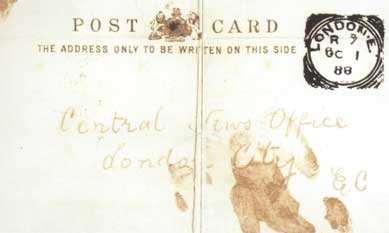 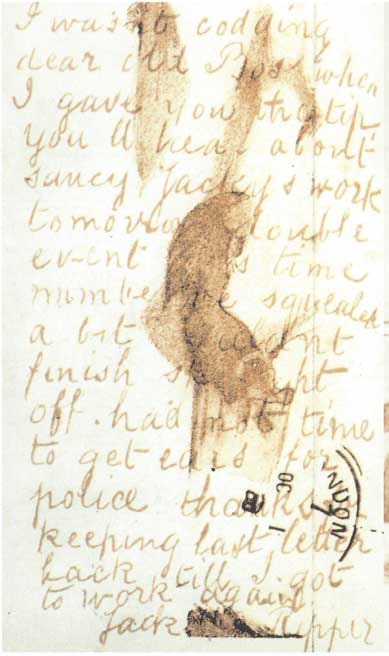 It was obvious that whoever had penned the postcard was inferring that it had been written a very short time after the murders had taken place, and that the writer was boasting to the police about the two murders he had, supposedly, just committed.

In addition, it included the taunt that he had indeed tried to carry out his threat from the previous communiqué of clipping a victim's ears off.

THE LETTERS START COMING IN

Within days of the "Dear Boss" letter and postcard being made public, copies of them began appearing in the worldwide press.

This publicity proved a bane to the police endeavours to catch the killer as it sparked off a national past time that saw hoaxers countrywide reaching for their pens and, very soon, the beleaguered police investigation was swamped by a veritable tidal wave of bogus correspondence that purported to come from the murderer.

The police had no choice but to read and assess each letter, form a judgment on its veracity and, if possible, trace and investigate the writer.

George Sims, the journalist, writing in his Dagonet column for the Referee on Sunday October 7th, aptly summed up the effect that the release of the letter and post card - and the arrival in the public consciousness of the name Jack the Ripper - had had:-

JACK THE RIPPER is the hero of the hour. A gruesome wag, a grim practical joker, has succeeded in getting an enormous amount of fun out of a postcard which he sent to the Central News. The fun is all his own, and nobody shares in it, but he must be gloating demonically at the present moment at the state of perturbation in which he has flung the public mind. Grave journals have reproduced the sorry jest, and have attempted to seriously argue that the awful Whitechapel fiend is the idle and mischievous idiot who sends blood-stained postcards to the news agency. Of course the whole business is a farce.”

WHAT THE COMMISSIONER THOUGHT

By this time, the police were certain that the correspondence had most certainly not been penned by the same hand that had murdered Mary Nichols, Annie Chapman, Elizabeth Stride and Catharine Eddowes. But, of course they had been duty bound to investigate them, if only to trace the author and eliminate him or her from their enquiries.

At present I think the whole thing a hoax but of course we are bound to try & ascertain the writer in any case.”

In 1910, in his memoirs, Robert Anderson, who at the time of the murders was the Assistant Police Commissioner and head of the Detective Department, was even more emphatic that the letter had been a hoax.

He even stated that the police knew the prankster's identity:-

I will only add here that the "Jack the Ripper" letter which is preserved in the Police Museum at New Scotland Yard is the creation of an enterprising London Journalist.”

THE WRITER KNEW HOW THE PRESS WORKED

The fact that whoever was responsible for sending the letter and creating the name Jack the Ripper sent it to a news agency, rather than to a newspaper, suggests that the writer was, in fact, familiar with the workings of the press at the time.

As George Sims observed to his readers:-

The fact that the self-postcard-proclaimed assassin sent his imitation blood-besmeared communication to the Central News people opens up a wide field for theory. How many among you, my dear readers, would have hit upon the idea of "the Central News" as a receptacle for your confidence? You might have sent your joke to the Telegraph, the Times, any morning or any evening paper, but I will lay long odds that it would never have occurred to communicate with a Press agency. Curious, is it not, that this maniac makes his communication to an agency which serves the entire Press? It is an idea which might occur to a Pressman perhaps; and even then it would probably only occur to someone connected with the editorial department of a newspaper, someone who knew what the Central News was, and the place it filled in the business of news supply. This proceeding on Jack's part betrays an inner knowledge of the newspaper world which is certainly surprising. Everything therefore points to the fact that the jokist is professionally connected with the Press. And if he is telling the truth and not fooling us, then we are brought face to face with the fact that the Whitechapel murders have been committed by a practical journalist - perhaps by a real live editor! Which is absurd, and at that I think I will leave it.”

THE LETTER FROM HELL

George Sims may have been content to leave it, but the letter writers most certainly were not.

As October progressed, more and more letters continued to arrive.

Then, on the 16th October 1888, Mr. George Lusk, the President of the Mile End Vigilance Committee received what is now the second most famous of all the letters, the letter "From Hell."

The Jack The Ripper Letters

The "From Hell" Letter