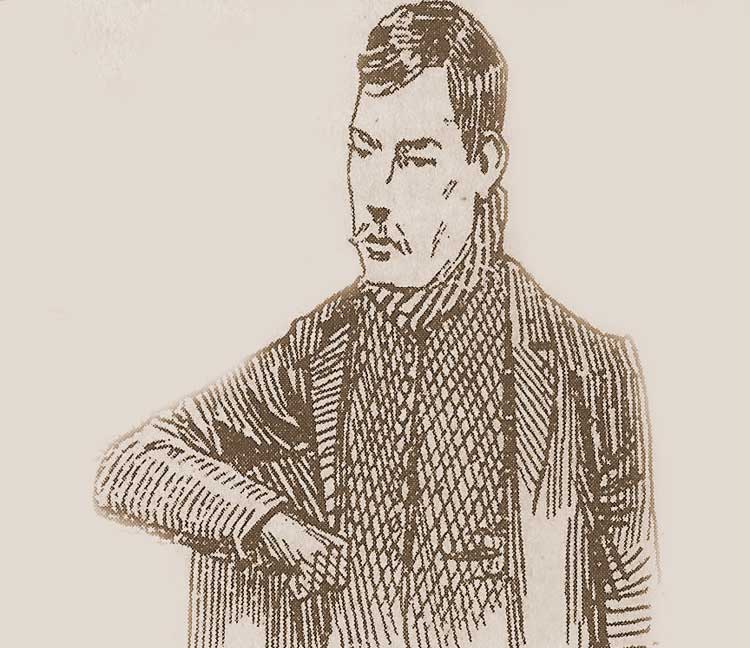 She Told Him Her History

Joseph Barnett first met Mary Kelly on Commercial Street, on Good Friday, 1887. They met again the next day, and began to live together at various addresses around the East End of London, their final abode together being the room at 13, Miller's Court in which Mary Kelly was murdered on the 9th of November, 1888.

Barnett earned his living as a porter at Billingsgate Fish Market. However, he lost his job in July, 1888, and, it seems, Mary Kelly had then returned to prostitution in order to make ends meet.

Giving testimony at the inquest into Mary Kelly's death, He admitted that they "occasionally" quarreled, and after one such argument, on 30th October 1888, they had separated, Barnett taking up residence at a boarding-house on Bishopsgate.

He, however, continued to visit her on a daily basis and would give her money when he had it.

He last saw her alive on the evening of Thursday, 8th November, 1888, when he had visited her in her room at 13, Miller's Court, finding her in the company of another woman, who he did not know.

He left her room at around 8pm and returned to his boarding-house, where he remained for the rest of the evening.

THE POLICE SUSPECTED HIM

Giving his history with the victim, the police obviously suspected him of her murder, and, in consequence, he was questioned for more than four hours, and his clothes were minutely examined for any traces of blood.

He satisfied the police that he had not been in any way involved in her murder, and he left police custody completely cleared of any suspicion.

On Monday, 12th November, 1888, Joseph Barnett was the first witness to be called at the inquest into Mary Kelly's death. His testimony is of interest for many reason, not least because, having known Mary Kelly intimately, he was able to provide biographical detail about her.

Indeed, much of what we know about Mary Kelly's background is derived from information about her that Joseph Barnett provided in the aftermath of her murder.

Joseph Barnett was the first witness called, and said he was a labourer working by the riverside, and up to Saturday last he lived at 24, New-street, Bishopsgate, having been staying at 21, Portpool-lane since then.

He had lived with the deceased, Marie Jeannette Kelly, for a year and eight months, and had seen the body in the mortuary, which he identified. He was quite positive that the body was that of the woman he lived with.

Kelly was her maiden name.

He had lived with her at 13 room in Miller's-court about eight months, and ceased to live with her on October 30th, because she insisted on taking in a woman of immoral character.

It was not because he was out of work that he ceased to live with her.

He last saw her alive about 7.30 on Thursday evening, when they were on friendly terms. She was quite sober at that time and did not have anything to drink with witness.

Deceased occasionally got drunk, but generally speaking she was sober when she lived with him.

She had told him several times that she was born in Limerick, but removed to Wales when quite young. Witness could not say whether it was at Carnarvon or Carmarthen that she lived, but her father was employed at some ironworks.

She also told witness that she had a sister who resided with her aunt and followed a respectable calling. She had six brothers and sisters, one of the former being in the army.

She told him that she had married a collier named Davis in Wales when she was 16 years of age, and lived with him until he was killed in an explosion a year or two afterwards.

After her husband's death she went to Cardiff with a cousin and came to London about four years ago. She lived at a gay house in the West-end for a short time, and then went to France with a gentleman, but did not like it and soon returned to London, living in Ratcliff-highway, near the gasworks, with a man named Morganstone. She afterwards lived with a mason named Joseph Fleming, somewhere in Bethnal-green.

Deceased told witness all her history while she lived with him.

Witness picked her up in Spitalfields on Friday night, and made an appointment to meet her the next day, when they agreed to live together, and they had done so ever since.

He did not think deceased feared any one in particular, but she used to ask witness to read to her about the murders.

She occasionally quarreled with witness, but not often, and seldom with anybody else."