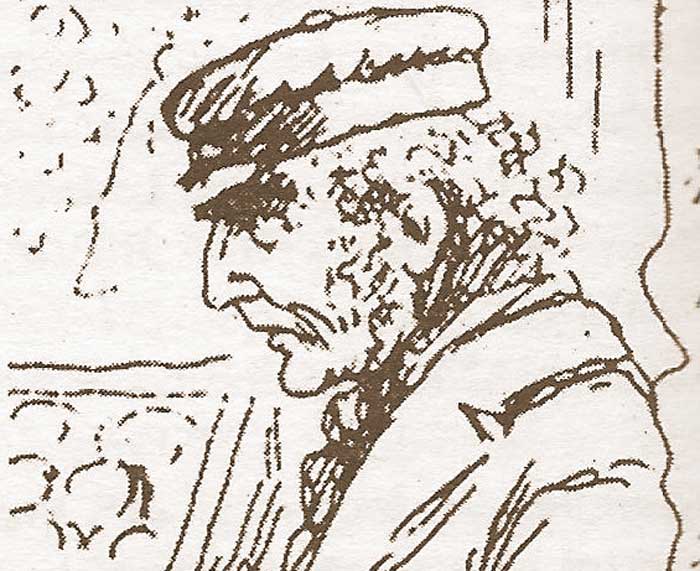 Sold Grapes To A Couple

Sergeant Stephen White interviewed Packer later that day, and reported that Packer, his wife, and their lodgers had not seen anything, or anybody, in Berner Street on the night of the murder. He explained to the police officer that, due to the heavy rain that night, he had closed his shop early and had retired for the night.

However, when he was later approached by two private detectives, Le Grand and J. H. Batchelor, who had been hired by the Whitechapel Vigilance Committee and the Evening News, he had remembered the significant fact that he had, in fact, sold grapes to a man and woman - the latter of which resembled the description of the Berner Street victim - shortly before Elizabeth Stride's murder.

The Eastern Evening News, published his account of what he "remembered" in its edition of Friday, 5th October, 1888:-

Their inquiries to establish fact that the perpetrator of the Berner Street crime was seen and spoken to whilst in the company of his victim, within 40 minutes of the commission of the crime, and only passed from the sight of the witness 10 minutes before the murder, and within 10 yards of the scene of the awful deed.

When they began their quest, almost the first place at which the detectives sought evidence was No. 44, Berner Street, the second house from the spot where the body was found.

This is the residence of a man named Mathew Packer, who carries on a small business as a greengrocer and fruiterer. His shop is an insignificant place, with a half window in front, of the sort common in the locality, and most of his dealings are carried on through the lower part of the window case, in which his fruit is exposed for sale.

Mathew Packer, after two or three interviews, made and signed a statement in writing.

On Saturday night, about 11.45, a man and woman cams, says, to his shop window, and asked for some fruit.

The man was middle-aged, perhaps 35 years; about 5ft. 7in. in height; was stout, square built; wore a wideawake hat and dark clothes; had the appearance of a clerk; had a rough voice and a quick, sharp way of talking.

The woman was middle-aged, wore a dark dress and jacket, and had a white flower in her bosom.

It was a dark night, and the only light was afforded by an oil lamp, which Packer had burning inside his window, but obtained a sufficiently clear view of the faces of the two people as they stood talking close in front of the window, and his attention was particularly caught by the white flower which the woman wore, and which shewed out distinctly against the dark of her jacket.

The man asked his companion whether she would have black or white grapes; she replied "black."

"Well, what's the price of the black grapes,", the man inquired.

"Well, then, old man, give us half a-pound of the black," said the man.

Packer served him with the grapes, which he handed to the woman.

They then crossed the road and stood on the pavement almost directly opposite to the shop for long time - more than half-an-hour.

It will be remembered that the night was very wet, so Packer naturally noticed the peculiarity of the couple's standing long in the rain. He observed to his wife, "What fools those people are to be standing in the rain like that!"

At last the couple moved from their position and Packer saw them cross the road again and come over to the club, standing for a moment in front of it as though listening to the music inside.

Then he lost sight of than. It was then 10 or 15 minutes past midnight. Packer, who was about to close his shop, noting the time by the fact that the public-houses had been closed.

With a view of testing the accuracy and honesty of Packer's testimony, the detectives obtained an order to view the body of the woman murdered in Mitre-square, and took Packer to see it, leaving him under the impression that they were taking him to see the Berner-street victim.

On seeing the body he declared that it was not the woman for whom the grapes had been bought, and not a bit like her.

The two detectives, reasoning that the grape-stalk had probably been washed away with the blood and dirt removed by the police, next proceeded to search the sink down which the results of the police washing had been put, and, amidst a heap of heterogeneous filth, they discovered a grape-stalk. It is a matter of common knowledge that some grapes were found in one hand of the murdered woman, so that the finding of this fragment of grape-stalk, though important as binding the links of the evidence closer together, was scarcely necessary to establish the fact that the victim had been eating the fruit immediately before her death.

There is one seeming discrepancy between the story of Packer and the facts as published; it has been reported that red a flower was found in the murdered woman's bosom, and Packer states that she wore a white flower. This is sufficiently easy of explanation, since Packer does not say that the woman wore only a white flower, but that the attention was particularly drawn to the white flower from its standing out against the of her dress, and the absence of the flower from her jacket when found by the police is unimportant in view of the evidence of Miss Harstein, who subsequently saw fragments of it in the passages.

It may be added that Packer declared to a reporter who visited him on Wednesday night that, except for the private detectives, no detective or policeman had ever asked him a single question, or come near his shop to find out if he knew anything about the grapes the murdered woman had been eating before her throat was cut."