THE INQUEST INTO MARTHA TABRAM'S DEATH 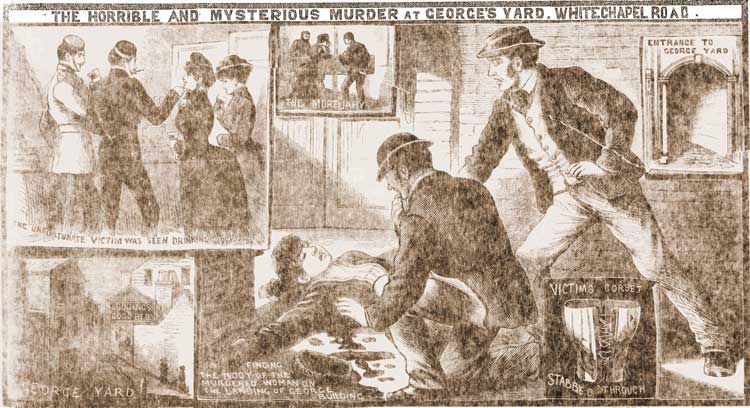 "The inquest, which took place on Thursday before Mr. Collier, the deputy-coroner for the South-Eastern Middlesex Division, the Library of the Working Lads' Institute at Whitechapel, was looked forward to with the keenest interest, as being a probable means for eliciting the identity of the murdered woman.

As a matter of fact, no lees than three persons attended and swore to the identity of the woman in as many different names.

The identification, however, of all three was more or less doubted, the greatest credence being attached to a woman who appeared early in the Library with a baby in her arms.

She wore a blue tress with a black hat, and a white checked blue handkerchief round her neck. She had been taken by Banks, the coroner's officer, to view the body at the mortuary, and was positive in asserting that she recognised it as that of a woman of her acquaintance named Martha Turner, a married woman.

But although the inquest was ostensibly , carried out upon the body of "Martha Turner," the proofs of the identity were so vague that the deputy-coroner, towards the end of the inquest, expressed the opinion that it was scarcely worth while calling the woman who professed to identify the deceased as a witness - at all events, not until further proof had been forthcoming of the accuracy of the identification.

The interest evinced in the case was proved by the unprecedentedly large umber of summoned jurymen who put in an appearance - twenty of them in all - who appointed a Mr. Geary as their foreman.

They sat to the left of the coroner, who had on his right Dr. Keeling and Inspector Reid - a smart looking man, dressed in blue serge, who, without taking so much as a note, seemed to be absorbing all the material points.

Before the coroner sat the woman who had identified the deceased as Martha Turner, with a baby in her arms, and accompanied by another woman - evidently her mother - dressed in an old, brown figured pompadour.

Above the coroner hung a magnificent portrait by Heir Louis Fleischman, of the Princess of Wales, while other portraits of the Royal Family and landscape pictures were in profusion around the walls of the room.

It was in this library, so well and prettily furnished, that the details of the Whitechapel mystery were unravelled.

The first witness called was a Mrs. Elizabeth Mahoney - a young woman of some 25 or 28 years, plainly clad in a rusty-black dress, with a black woolen shawl pinned round her shoulders.

Her evidence was neither very much to the point or distinctly uttered - indeed, so low was her voice as to elicit a complaint from the jurymen which was remedied by the witness being made to stand immediately next to the jury.

She deposed thus: I live at 37, George-yard buildings, Whitechapel - a block of model dwellings - and am a married woman, my husband, Joseph, being a carman, while I work at a match factory at Stratford, where I work from nine in the morning, usually, till about seven o'clock at night.

So far as I can remember, I have occupied rooms in the present house for about eight mouths.

Monday was a Bank Holiday, and my husband and I were out all day, and did not return until twenty minutes to two on Tuesday morning. We went straight up to our room, and after taking off my hat and cloak, I came down again and went to a chandler's shop in Thrawl-street to buy some provisions for supper. I came back, having been gone about five minutes; and after having supper we went to bed.

On no occasion, either in coming up or going down the stairs, did I see the body of a woman lying there. It is quite possible that a body might have been there, and that I did not notice it, because the stairs are very wide, and were completely dark, all the lights having, as usual, been turned out at eleven o'clock.

I did not get up till half-past eight in the morning, and during the night my attention was not attracted by a noise or disturbance of any kind.

I did not know of the body of the deceased having been found on the stairs till about ten o'clock on Tuesday morning.

Questioned, at the instigation of Inspector Reid, she reiterated that at the place where the body was subsequently found, it was quite possible, so wide was the staircase, for her to have passed it without noticing it.

Alfred George Crow was the next witness. In appearance, be was a young man of about twenty-three or four, with closely cropped hair, and a beardless, but intelligent face, and wore a shabby green overcoat.

Said he: I live at 37, George yard-buildings, and am a cab-driver. I came home at half past three on Tuesday morning, which is about my usual time, although I am on day duty.

I went straight up to my lodgings. I had no light with me, and went up the same staircase as the last witness.

On my way up I noticed that there was somebody lying on the first landing. My eyesight is very good, and I noticed a body lying there, just as I turned the landing. I am accustomed, however, to find people lying sleeping there, and took no notice at the time - not even to ascertain whether the body was that of a male or female.

I don't know, therefore, whether the deceased was alive or dead at the time I saw her.

I went to bed, and did not come out again before half-past nine, and up to that time I heard no noise at all of any kind.

When I went down the stairs then, the body was gone, and I did not know what had been done with it.

When I first saw the body I took so little notice that I am not prepared to say whether or not it was the body of this female at all.

THE TESTIMONY OF JOHN SAUNDERS REEVES

John Saunders Reeves - a short man, with a slight dark beard and moustache, a pale and a contracted face, dressed in corduroy trousers and a black overcoat, and wearing earrings - was next called.

He was, he said, a waterside labourer, living at George-yard buildings.

In the course of his work he had to get out very early in the morning, and on Tuesday morning he proceeded to go out to work at a quarter to five in the morning.

On reaching the first-floor landing, he proceeded. I found a female there lying on her back, in a pool of blood.

I did not stop to examine her further, but gave information to a police-constable whom I met she street.

I went up to my room on Monday night at six o'clock, and remained there all night till I went down at a quarter to five, and during that time I heard no unusual noises.

I made no examination whatever of the body when I first saw it, but I did notice that all the clothes were disarranged, being open in front.

I did not notice any foot-marks on the staircase, nor did I find a knife or any other instrument lying there.

The hands of the deceased were clenched, but contained no hair or anything else; nor was there any blood coming from the mouth.

By a juryman: I believe it is quite possible for anybody coming up the stairs in the dark to have passed the body without noticing it.

Police-constable T. Barrett, 226 H - a young constable who gave his evidence very intelligently - said: On Tuesday morning I was on duty at about a quarter to five, when my attention was called to George-yard buildings by Reeves, the last witness.

I followed him up the the stairs, and found the deceased lying on her back. She was dead, but I at once sent for a doctor.

The body was not moved by me or Reeves before the doctor came. I noticed that the hands were clenched, but that there was nothing in them.

The clothes were turned up as far as the centre of the body, leaving the lower part of the body exposed; the legs were open, and altogether her position was such as to at once suggest in my mind that recent intimacy had taken place.

The deceased was not known on the street.

Dr. T. R. Keeling gave his evidence as follows:- I am a fully qualified doctor practising at Brick-lane, and was called to the deceased on the morning of the 7th of August at about half-past five.

I found her dead.

On examining the body externally I found no less than thirty-nine punctured wounds.

From my examination of the body it seemed to be that of a woman about 38 years of age, and was well nourished.

I have since made a post mortem examination of the body.

The brain was healthy; the left lung was penetrated in five places, and the right lung in two places, but the lugs were otherwise perfectly healthy.

The heart was rather fatty, and was penetrated in one place, but there was otherwise nothing in the heart to cause death, although there was some blood in the pericardium.

The lower portion of the body was penetrated in one place, the wound being three inches in length and one in depth.

From appearances, there was no reason to suspect that recent intimacy had taken place.

I don't think that all the wounds were inflicted with the same instrument, because there was one wound on the breast bone which did not correspond with the other wounds on the body.

The instrument with which the wounds were inflicted would most probably be an ordinary knife, but a knife would not cause such a wound as that on the breast bone. That wound I should think would have been inflicted with some form of a dagger.

I am of the opinion that the wounds were inflicted during life, and from the direction which they took it is my opinion, that although some of them could have been self-inflicted, yet, there were others which could not have been so inflicted.

The wounds generally would have been inflicted by a right-handed person.

There was no sign whatever of any struggle having taken place; and there was a deal of blood between the legs, which were separated.

Death was due to hemorrhage and loss of blood.

Mr. Collier, having called the attention of the jury to the fact that no perfectly satisfactory identification had yet been made, suggested the advisability of adjourning the inquest till that day fortnight.

In the meantime Inspector Reid, who had the case in hand, would do all he could to ascertain the assailant of the woman.

"It is one of the most terrible cases," concluded Mr. Collier, with unusual animation, "that anyone can possibly imagine. The man must have been a perfect savage to have attacked the woman in that way."