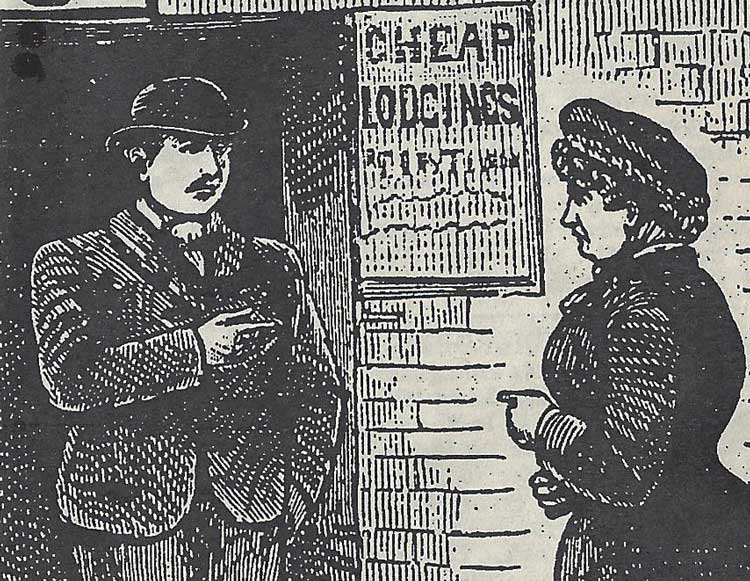 John Evans was the night watchman at Crossingham's lodging house, 35 Dorset Street, at which Annie Chapman had been residing off and on for the four months prior to her murder.

His nickname amongst the lodgers was "Brummy."

At around quarter to two, on the morning of the 8th September, 1888, Timothy Donovan sent him to escort Annie Chapman from the lodging house, because she didn't have the money to pay for her bed.

Davis escorted her to the door where she paused and said to him, "I won't be long, Brummy, see that Tim keep the bed for me."

So saying, she walked along Dorset Street, turned into Paternoster-street and then into Brushfield-street, before turning right towards Spitalfields Church.

In the early hours of the morning of the 8th of September, 1888, he had turned Annie Chapman away from the lodging house, because she didn't have the money to pay for a bed.

On the morning of 10th September, 1888, he appeared as a witness at the inquest into Annie's death, and, according to the following excerpt, which appeared the next day in the Daily News, he was a decidedly feisty witness who very quickly got on the wrong side of the coroner:-

The watchman of the lodging house came next, a pallid youth whose duty it was to sit up all night.

A curiously cropped head, a huge dirty white muffler round his neck, and a quiet sphinx-like imperturbability of countenance were his chief characteristics.

A SYNOPOSIS OF HIS TESTIMONY

The East London Observer, provided a summary of his inquest testimony in its edition of Saturday, 6th October, 1888:-

John Evans, the next witness, testified:-

"I am night watchman at 35, Dorset-street, and have identified the deceased as having lived at the lodging-house.

I last saw her there on Saturday morning, and she left at about a quarter to two o'clock.

I was sent down in the kitchen to see her, and she said she had not sufficient money.

When she went upstairs I followed her, and, as she left the house, I watched her go through a court called Paternoster-street into Brushfield-street, and then turn towards Spitalfields Church.

Deceased was the worse for drink, but not badly so.

She came in soon after twelve (midnight), when she said she had been over to her sister's in Vauxhall.

She sent one of the lodgers for a pint of beer, and then went out again, returning shortly before a quarter to two.

I knew she had been living a rough night life.

She associated with a man - a pensioner - every Saturday, and this individual called on Saturday at 2.30 p.m. and inquired for the deceased. He had heard something about her death, and came to see if it was true. I do not know his name or address. When I told him what had occurred he went straight out, without saying a word, towards Spitalfields Church.

I did not see the deceased and this man leave the house last Sunday week.

On Thursday, August 30th, deceased had a row in the kitchen with a woman known as "Eliza," at 11.30 a.m. They were quarrelling about a piece of soap, and Chapman received a blow in the chest. I noticed that she had a slight black eye. There are marks on the body in a similar position.

I have never heard any one one threaten her, nor her to express fear of any one.

I have never heard any one of the women in the lodging-house say that they had been threatened.""