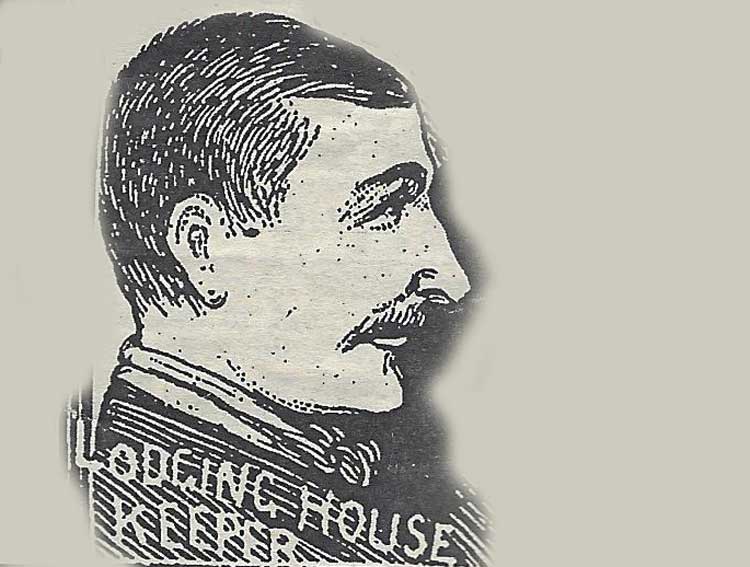 HE TURNED ANNIE CHAPMAN AWAY

Timothy Donovan was the deputy lodging-house keeper at Crossingham's lodging house, 35 Dorset Street, at which Annie Chapman had been residing off and on for the four months prior to her murder.

In the early hours of the morning of the 8th of September, 1888, he had turned Annie Chapman away from the lodging house, because she didn't have the money to pay for a bed.

On the morning of 10th September, 1888, he appeared as a witness at the inquest into Annie's death, and, according to the following excerpt, which appeared the next day in the Daily News, he was a decidedly feisty witness who very quickly got on the wrong side of the coroner:-

Timothy Donovan came next, He was the deputy of the lodging house in which these women [the previous witnesses] had lived - a thin-faced, sullen-looking young man, with a plentiful lack of shirt collar and a closely twisted crimson scarf around his throat.

He had not gone far before he and the coroner got into a wrangle over the question as to whether a man who got up as late as a lodging house deputy was not justified in speaking of half-past two p.m. as half-past two in the morning. The coroner got the best of the argument and reprimanded the witness for his insolence of tone.

Then things went smoothly, and Donovan threw a lurid light upon the manners and customs of his people..."

A SYNOPSIS OF HIS TESTIMONY

The East London Observer, provided a synopsis of his inquest testimony in its edition of Saturday, 6th October, 1888, in which, it must be observed, Donovan doesn't come across as having been a particularly caring character:-

"I am the deputy of a common lodging-house.

I have seen the body of the deceased, and have identified it as that of a woman who stayed at my house for the last four months.

She was not there last week until Friday afternoon, between two and three o'clock.

I was coming out of the office after getting up, and she asked me if she could go down in the kitchen, and I said "Yes," and I asked her where she had been all the week. She replied that she had been in the infirmary, but she did not say which.

Deceased went down in the kitchen, and he did not see her again until half-past one or a quarter to two on Saturday morning.

"At that time I was sitting in my office, which faces the front door. She went into the kitchen. I sent the watchman's wife, who was in the office with me, downstairs to ask her husband about the bed. Deceased came upstairs to the office and said, "I have not sufficient money for my bed. Don't let it. I shan't be long before I am in." it was eight pence for the night. The bed she occupied, number 29, was the one that she usually occupied.

Deceased was then eating potatoes and went out.

She stood in the door two or three minutes, and then repeated, "Never mind, Tim; I shall soon be back. Don't let the bed."

It was then about ten minutes to two am.

She left the house, going in the direction of Brushfield Street. John Evans, the watchman, saw her leave the house. I did not see her again.

She had had enough drink; of that I am certain. She walked straight. Generally on Saturdays she was the worse for drink.

She was very sociable in the kitchen.

She said she had been only to the top of the street - where there is a public house.

She used to come and stay at the house on Saturdays with a man of soldierly appearance, whose name I do not know.

At other time she would come with other men, and I have refused her.

The pensioner told me not to let her a bed if she came with any other man.

She did not come with a man that night. I never saw her with any man that week.

The beds are double at 8d. per night and, as a rule, deceased occupied one of them by herself.

The pensioner was last with deceased at the lodging-house on Sunday, September 2nd. I cannot say whether they left together.

I have heard the deceased say, "Tim, wait a minute. I am just going up the street to see if I can see him." She added that he was going to draw his pension. This occurred on Saturday, August 25th at 3 a.m.

I never heard deceased call the man by any name.

He was between forty and forty-five years of age, about 5ft. 6in. or 5ft. 8in. in height. Sometimes he would come dressed as a dock labourer; at other times he had a gentlemanly appearance. His hair was rather dark.

I believe she always used to find him at the top of the street.

About Tuesday, August 28th, she and another woman had a row in the kitchen. I saw them both outside. As far as I know she was not injured at that time. I heard from the watchman that she had had a clout. I noticed a day or two afterwards, on the Thursday, that she had a slight touch of a black eye. She said, "Tim. this is lovely," but she did not explain how she got it. The bruise was is be seen on Friday last.

I know the other woman, but not her name. Her husband hawks laces and other things."