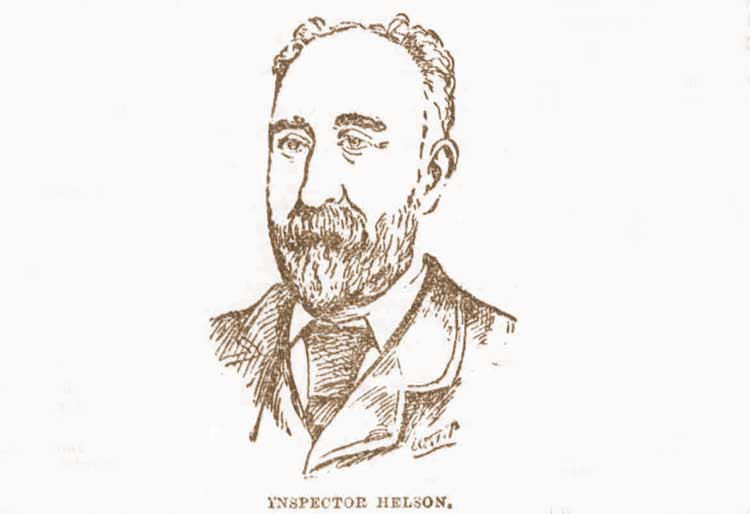 HEAD OF THE J-DIVISION DETECTIVES

Inspector Joseph Henry Helson (1845 - 1920) was born at Tavistock, in Devon, in April, 1845, and, on leaving school, he commenced work as a blacksmith in his native village.

In the following year, he was transferred to the B division, where he remained until 1872, when he was promoted to sergeant.

In the wake of Scotland Yard's detective scandal, of 1878, and the collapse of the old Detective Department, Helson was transferred as a second-class sergeant to the Criminal Investigation Department (CID) and sent to the L division.

In 1887 he was promoted to inspector, and he took charge of the J division, in which position he would remain until his retirement in January, 1895. 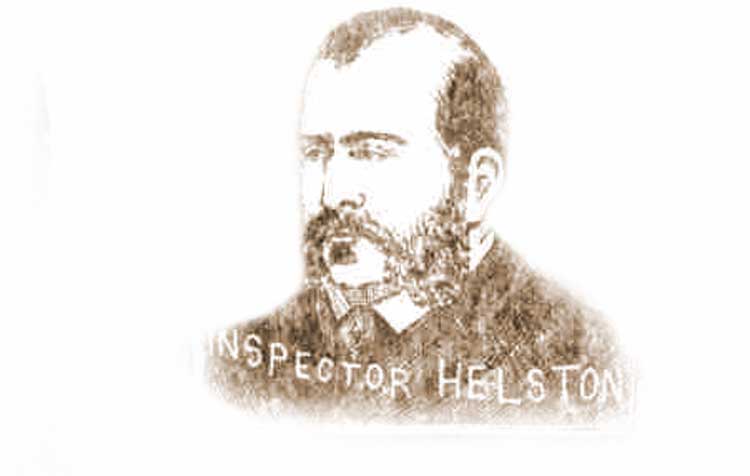 HIS INVOLVEMENT WITH THE JACK THE RIPPER CASE

Since Buck's Row, where Mary Nichols was murdered, on August 31st, 1888, was in J Division's jurisdiction, it was Helson who had overall charge of the investigation into her murder.

On Saturday, 1st September, 1888 The Sheffield Daily Telegraph reported that, "Inspector Helson, who has charge of the case, is making every effort to trace the murderer, but there is so little to guide the police that, at present, there does not seem much likelihood of success..."

The same article went on to reveal that it was thanks to the "energetic efforts of Inspector Helson" that the Buck's Row victim was identified as Mary Nichols.

At the resumed inquest, on Monday, 3rd, September, 1888, he was questioned about the state of the clothing that the victim had been wearing at the time of the atrocity, and was also asked whether the murder had taken place elsewhere and the body simply moved to the location at which it was found:-

Inspector Helson gave evidence describing the wounds and the clothing worn by the deceased.

The Londonderry Sentinel, on the same day, gave a few more details of his inquest testimony:-

Inspector Helson described the condition of the deceased's clothing.

The back the bodice, he said, had absorbed a large quantity of blood, but there was none upon the petticoats.

There was no evidence of the body having been washed, and there were no cuts in the clothing.

It would have been possible to inflict the wounds where the clothing was on, and without cutting it.

He was of the opinion that the woman was murdered in her clothes, and that the murder was committed where the body was found."

Further details of his testimony were given by The Warminster & Westbury journal, and Wilts County Advertiser, in its edition of the following Saturday:-

Inspector Helson, of the J Division, said that the deceased had a long ulster, with large buttons, five of which were fastened. The bodice of the dress was buttoned, with the exception of two or three buttons at the neck. The stays were fastened up, and were fairly tight.

There was no evidence of recent washing of the parts of the body where wounds had been inflicted in order to remove the blood.

There were no cuts in the clothing; but he believed that the murder was committed while the deceased was wearing her clothes.

With the exception of one spot in Brady-street, there were no bloodstains in the vicinity."

Thereafter, his name appears as having attended the inquests into the deaths of several other victims as the representative of the Chief Commissioner of the Metropolitan Police, Sir Charles Warren.

Of course, since the other murders took place in the jurisdiction of H Division - with the exception of that of Catherine Eddowes, which took place in the City of London - Helson would not have had direct responsibility for those cases, and he was kept busy by numerous other crimes that continued to occur within his jurisdiction.

THE RETIREMENT OF INSPECTOR HELSON

On the 14th of January, 1895, having completed twenty-seven-years of service, Inspector Joseph Henry Helson, called time on his police career, and retired from the force.

Lloyd's Weekly Newspaper paid tribute to him on the Sunday following his retirement, with an article that recalled some of the highlights of his long and distinguished career:-

On Saturday the Criminal Investigation department of the Metropolitan police lost the services, through retirement, of one of its most respected officers in the person of Detective-inspector Helson, of the J division...Inspector Helson has been connected with between 3,000 and 4,000 cases, and has received numerous rewards and commendations from judges at the Old Bailey, Chelmsford, Hortford, and other places.

During his career, Inspector Helson has been successful in circumventing several long firm swindles, and, on one occasion, was instrumental in the arrest of a gang of 14 persons, whose trial a few years ago created such a sensation. The police-court proceedings in the case, which took place at Worship-street, occupied six months, one hundred and forty witnesses being called. The trial at the Old Bailey lasted eight days, and resulted in the conviction of the whole of the prisoners.

Detective-Inspector Helson, who arrested ten of them, was highly recommended on that occasion.

Mr. Helson was also connected with the Dalston murder case, when Police- constable Cole was shot by the notorious burglar Horrocks, whom he tried to arrest, when the latter was breaking into a chapel.

Of late years, Inspector Helson was instrumental in securing the arrest of a daring gang of burglars who, starting from East London, made Reading their headquarters, and committed numerous burglaries in the neighbourhood. The whole of the gang were convicted and sentenced to long terms of imprisonment.

It was also under Mr. Helson's instructions that "Dr." Evans, the partner of the notorious Mrs. Baker, was arrested and sentenced to three years penal servitude, the convict dying in prison.

Inspector Helson, who is now 50-years-of-age, retires after 27 years service, on a well-earned pension, much to the regret of the men whom he has so ably controlled."