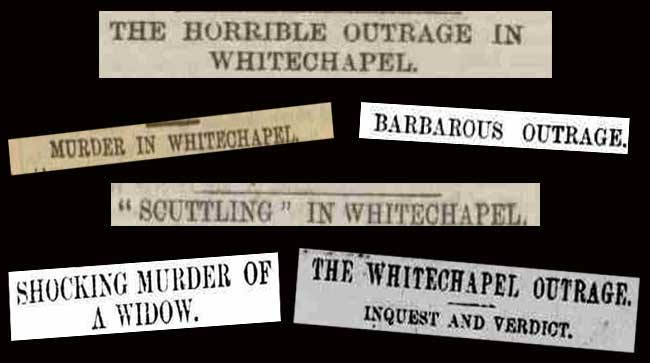 THE MURDER OF EMMA ELIZABETH SMITH

In the early hours of Tuesday April 3rd 1888 Emma Elizabeth Smith was making her way home to the common lodging house at 18 George Street that had been her home for several months, when she was set upon by a gang of local ruffians.

Although she survived the initial attack, she later died of her injuries at the London Hospital.

The likelihood is that she wasn't a victim of Jack the Ripper, but hers is the first name featured on the generic "Whitechapel Murders" file.

Below, you can read a selection of the newspaper reports on her murder.

Please note that, in some of the reports, names were misspelt by the newspaper reporters but, since these reports are intended to be a verbatim account of the murders as they were described in the newspapers, they have been left uncorrected and are presented here as they were reported at the time.

A widow, named Emma Elizabeth Smith, aged 45, of Spitalfields, was returning home late on Easter Monday, and when in Whitechapel-road she was set upon and brutally maltreated by some men at present unknown. She was taken to the London Hospital, where she died from the injuries received.

The authorities of the London Hospital yesterday morning informed the East Middlesex coroner of the death in that institution of Emma E. Smith, aged 45, a widow, lately living in George-street, Spitalfields.

It appears that the woman went out on Bank Holiday, and when retuning home along Whitechapel-road Tuesday morning she was set upon by some men and severely maltreated.

The men ran off, leaving her on the ground in a semi-conscious condition.

She was taken home, and subsequently conveyed to the London Hospital, where she died from her injuries

THE HORRIBLE OUTRAGE IN WHITECHAPEL

At the inquest at the London Hospital, to-day, on Emma Elisabeth Smith, aged 45, widow, who was waylaid, robbed, and barbarously murdered in Whitechapel while returning home late on Easter Monday evening, a verdict of wilful murder against some persons unknown was returned. The evidence showed that deceased was set upon by a number of young ruffians who first robbed her, then outraged her, and ruptured the perineum by means of a blunt instrument, causing fatal inflammation.

Mr. Wynne E. Baxter held an inquest on Saturday, at the London Hospital, with regard to the death of Emma Elizabeth Smith, aged 45, a widow, lately living at 18, George-street, Spitalfields.

Mary Russell stated that Smith had been a lodger at 18, George-street, for some months.

On Bank Holiday she left the house in the evening, returned home between four and five o'clock the next morning severely injured, and said she had been shockingly treated by some men.

Mr. George Haslip, house surgeon at the London Hospital, deposed that the woman was admitted suffering from severe injuries. She told witness that at 1.30 on Tuesday morning she was going by Whitechapel Church, when she saw some men coming. She crossed the road to get out of their way, but they followed her. They assaulted her, and robbed her of all the money she had. She could not describe them, except that one looked a youth of 19.

After her admission to the hospital she gradually sank and died.

On Wednesday morning witness made a post-modem, and found that the injuries had been caused by some blunt instrument, which had been used with great force. The instrument had penetrated the peritoneum, and so set up peritonitis which caused death.

The coroner said that from the surgical evidence it was clear that the woman had been barbarously murdered. Such a dastardly assault he bad never heard of, and it was impossible to imagine a more brutal case.

The jury returned a verdict of wilful murder against some persons unknown.

THE HORRIBLE MURDER IN WHITECHAPEL

Mr. Wynne Baxter held on Saturday morning, at the London Hospital, an inquiry into the circumstances attending the death of an unfortunate, named Emma Eliza Smith, who was assaulted in the most brutal manner early on Tuesday morning in the neighbourhood of Osborn-street, Whitechapel.

Mary Russell, the deputy-keeper of a common lodging-house in George- street, Spitalfields, stated that the deceased, who had lived eighteen months in the house, left home on Monday evening in her usual health and returned between four and five next morning, suffering from horrible injuries.

The woman told witness that she had been shockingly ill-treated by some men and robbed of her money. Her face was bleeding and her ear cut. Witness took her at once to the London Hospital, passing through Osborn-street on the way, near a spot close to a cocoa factory, which Smith pointed out as the place where the outrage had been committed.

Smith, who seemed unwilling to go into details, did not describe the men nor give any further account of the occurrence to witness.

Dr. G.H. Hillier, the house surgeon in attendance on Tuesday morning, when the deceased was brought in, said the injuries which the woman had received were horrible. A portion of the right ear was torn, and there was a rupture of the peritoneum and other internal organs, caused by some blunt instrument.

The account given of the occurrence, by the unfortunate woman to the doctor, was that about half-past one o'clock on Tuesday morning, when near Whitechapel Church, she crossed over the road to avoid some men, who followed, assaulted her, robbed her of all the money she had, and then committed the outrage. There were two or three men, one of them looking like a youth of about nineteen.

The patient died on Wednesday, about nine a.m., of peritonitis.

In reply to questions from the coroner and the jury, the doctor said he had no doubt whatever that death had been caused by the wounds. He had found the other organs generally in a normal condition.

The deceased stated that she came from the country, but had not seen any of her friends for ten years.

Another woman subsequently examined as a witness deposed to seeing Smith about a quarter-past twelve on Tuesday morning, near the Burdett-road, talking to a man dressed in dark clothes with a white neckerchief round his neck. She had been assaulted a few minutes before seeing Smith, and was getting away from the neighbourhood, where there had been some rough work that night. Two fellows had come up to her, one asking the time and the other striking her on the mouth, and both running away. She did not think the man talking to Smith was one of her assailants.

Mr. John West, chief inspector of police of the H division, said he had no official information of the occurrence. He had questioned the constables on duty in the Whitechapel-road at the time, but none of them had either seen or heard any such disturbance as that indicated in the evidence, nor had seen anyone taken to the hospital. He would make inquiries as to Osborn-street in consequence of what had transpired at the inquest.

The Coroner, in summing up, said that from the medical evidence, which must be true, it was perfectly clear that the poor woman had been murdered, but by whom there was no evidence to show.

After a short consultation, a verdict of "Wilful murder" against some person or persons unknown was returned by the jury.

THE WHITECHAPEL OUTRAGE
INQUEST AND VERDICT

LONDON. SATURDAY. - This afternoon Mr. Wynne E. Baxter, the East Middlesex coroner held an inquiry at the London Hospital, Whitechapel, touching the death of Emma Elizabeth Smith, aged 45 years, a widow, lately living at 18, George Street, Spitalfields, who is alleged to have died from injuries received at the hands of some persons unknown, who brutally assaulted her when returning home along Whitechapel Road on bank holiday night.

Chief-Inspector West attended on behalf of the commissioners of police.

Mary Russell, of 18, George Street, stated that that address was a common lodging house, and the deceased had been a lodger there for some months. Witness acted as deputy.

The deceased got her living on the streets, and when she returned home one night she told witness that she had been thrown out of a window. When she had had drink, the deceased acted like a mad woman.

On bank holiday the deceased left the house in the evening, apparently in good health.

She returned home between four and five o'clock the next morning severely injured, and she said she had been shockingly treated by some men.

Her face was bleeding, and she said that she was also injured about the lower part of the body.

The witness took her at once to the hospital.

Deceased further said that she was coming along Osborne Street, Whitechapel, when she was set upon and her money taken from her.

On the way to the hospital deceased pointed out the spot, and said she did not know the men nor could she describe them.

Witness believed that the statements made by the deceased were to be relied upon.

By the Coroner - Deceased had often come home with black eyes that men had given her. She was not so drunk as not to know what she did.

Mr. George Haslip, house surgeon, deposed that deceased was admitted suffering from severe injuries. She had been drinking, but was not intoxicated. She had a very serious rupture of a recent date and also some bruises on her head. The right ear was torn and bleeding.

She told witness that at 1.30 that morning she was going by Whitechapel Church when she saw some men coming, and she crossed the road to get out of their way, but they followed her.

They assaulted her, robbed her of all the money she had, and then commenced to outrage her. She could not say if they used a knife. She could not describe them, except that one looked about nineteen.

After her admission she slowly sank, and died at nine o'clock on Wednesday morning.

Witness had made a post-mortem examination, and found that the injuries had been caused by some blunt instrument, which had been used with great force.

Deceased stated that she had not seen any of her friends for ten years.

The coroner said that from the medical evidence it was clear that the woman had been barbarously murdered. Such a dastardly assault he had never heard of, and it was impossible to imagine a more brutal case.

The jury returned a verdict of wilful murder against some person unknown.

THE FIRST OF THE SERIES 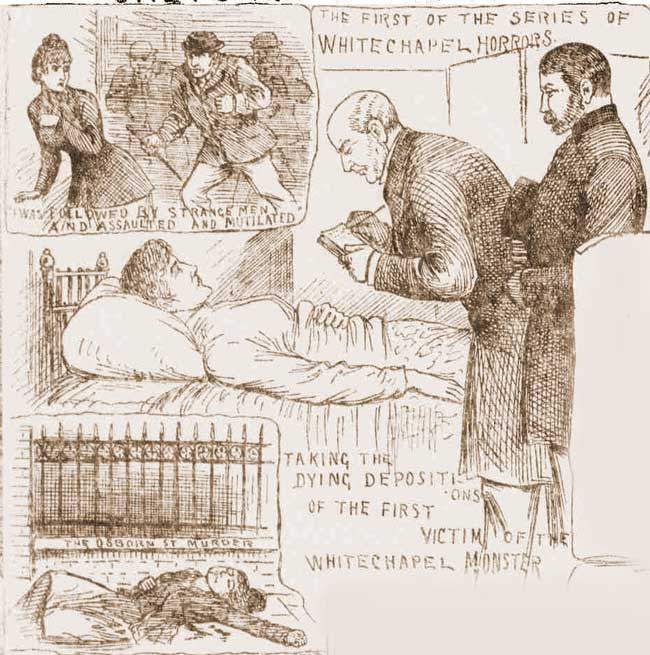 The Attack On Emma Smith

The Murder Of Martha Tabram

Around 1878 - Separated from her husband and severed all contact with her previous life.

Monday, 2nd April, 1888, Evening - She left the lodging house to go out drinking, as well as to indulge in casual prostitution.

Tuesday, 3rd April, 1888, 1.30am - Was followed from Whitechapel Road and along Osborn Street a three men. When she arrived opposite number 10, Brick Lane, they subjected her to a brutal and savage attack.

Tuesday, 3rd April, 1888, between 4am and 5am - She arrived back at her lodging house, 18 George Street, where several residents, alarmed by her obvious distress, persuaded her to let them take her to the London Hospital.

Tuesday, 3rd April, 1888 - Treated at the London Hospital for her injuries by Dr. George Ernest Haslip.

Saturday, 7th April, 1888 - The inquest into her death was held at the London Hospital, with Coroner, Wynne Edwin Baxter, presiding. The jury returned a verdict of "Wilful murder against some person, or persons, unknown.