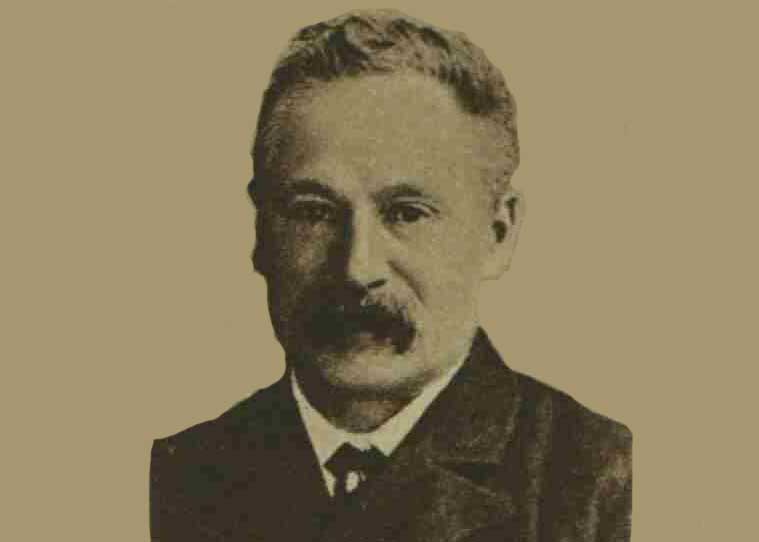 On Saturday, 22nd September, 1888. Coroner Wynne Edwin Baxter presided over the final day of the inquest into the death of Mary Nichols, whose body had been found in Buck's Row, Whitechapel, on August 31st, 1888.

With all the evidenced having been heard, the Coroner, addressed the jury and began his detailed summing up of the facts that had been presented at the inquest over the previous few weeks.

"The inquest on the body of Mary Anne Nichols, 47, who was found murdered in Bucks-row, Whitechapel, early on the morning of the 31st inst., was resumed on Saturday afternoon before Mr. Wynne Baxter, the district coroner, at the Working Lads' Institute, Whitechapel.

After thanking the committee of the Working Lads' Institute for the accommodation they had given for the holding of the inquiry, and commenting strongly on the absence of a mortuary in Whitechapel, where it was so greatly required, he proceeded to recall to the minds of the jury the salient facts of the case; and adverting to the life of the murdered woman, he said:-

The murdered woman has been identified by her father and her husband to have been Mary Anne Nichols, a married woman with five children, and of about 42 years of age.

She was of intemperate habits, and left her husband eight years ago on account of drink. He had not seen or heard of her for three years.

She had evidently formed irregular connections, but still lived under her father's roof for three or four years, and then either to avoid the restraints of a settled home, or in consequence of her own misconduct, she left her father, who had not seen her for more than two years.

From that time until her death, it is pretty clear that she had been living an intemperate and irregular life, mostly in the horrid common lodging-houses in this neighbourhood.

LIVING IN FLOWER AND DEAN STREET

There is nothing in the evidence as to the movements of the woman on the day before her death, except a statement by herself that she was living in a common lodging house, called the "White House," in Flower-and-Dean-street, Spitalfields; but I believe her movements have been traced by the police, and are not considered to have any connection with her death.

On Friday morning, the 31st of August, she was seen by Mrs. Holland (who knew her well) at the corner of Osborn-street and Whitechapel-road, nearly opposite the parish church. It was then half-past two, and the woman was at that time much the worse for drink, and was last seen endeavouring to walk eastward down Whitechapel. 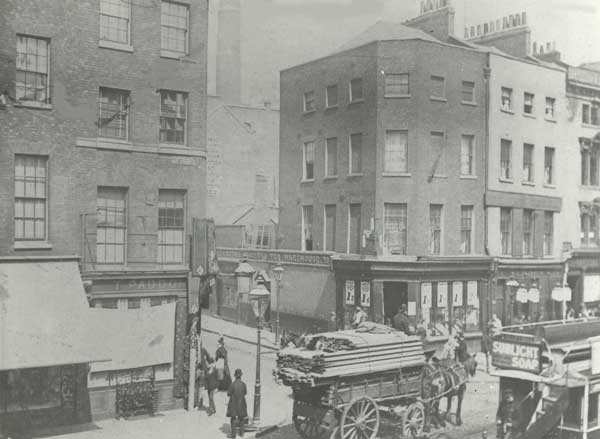 The corner of osborn Street.

What her exact movements were after this, it is impossible to say, but, in less than an hour and a quarter after this, she is found dead at a spot rather under three-quarters of a mile distant.

She was first discovered by a carman on his way to his work, who passed down Bucks-row on the opposite side of the read. Immediately after he had ascertained that the dark object in the gate-way was the figure of a woman, he heard footsteps approaching. This proved to be Paul, another carman.

Together they went to the woman.

The condition of her clothing suggested to them that she had been outraged and had fainted. Neither appear to have realised the real condition of the woman, and no injuries were noticed by them; but this, no doubt, is accounted for by the early hour of the morning and the darkness of the spot.

The time at which the body was found cannot have been far from 3.45 a.m., as it is fixed by so many independent data. 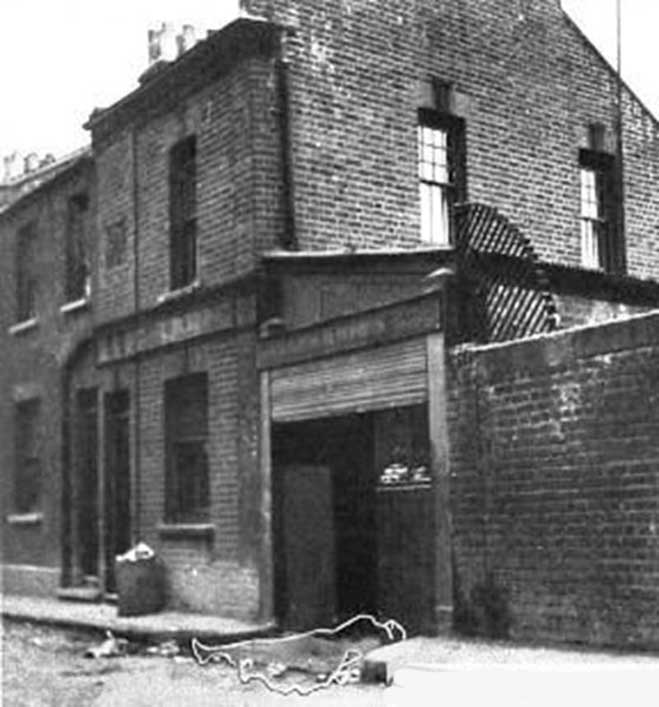 The murder site in Buck's Row.

KILLED WHERE RE SHE WAS FOUND

The condition in which the body was found appears to prove conclusively that she was killed on the exact spot in which she was found. There is not a trace of blood anywhere, except at the spot where her neck was lying.

Nor does there appear any ground for doubt that if she was killed where she was found that she met her death without a cry of any kind. Not a sound was heard, nor is there any evidence of any struggle. The clothes do not appear to have been injured, nor the ground disturbed.

Again, she could not have been killed long before she was found.

Police-constable Neil is positive that he was at the spot half an hour before, and then neither the body was there nor was any one about.

WAS THE MURDERER BLOOD-STAINED?

It seems astonishing at first thought that the culprit should have escaped detection, for there must surely have been marks of blood about his person.

If, however, blood was principally on his hands, the presence of so many slaughter-houses in the neighbourhood would make the frequenters of this spot familiar with blood-stained clothes and hands, and his appearance might in that way have failed to attract attention while he passed from bucks-row in the twilight into Whitechapel-road, and was lost sight of in the morning's market traffic.

ONE OF FOUR MURDERS BEING INVESTIGATED

We cannot altogether leave unnoticed the fact that the death that you have been investigating is one of four presenting many points of similarity, all of which have occurred within the space of about five months, and all within a very short distance of the place where we are sitting.

All four victims were women of middle age, all were married and had lived apart from their husbands in consequence of intemperate habits, and were, at the time of their deaths, leading an irregular life, and eking out a miserable and precarious existence in common lodging-houses.

In each case, there were abdominal as well as other injuries. In each case the injuries were inflicted after midnight, and in places of public resort, where it would appear impossible but that almost immediate detection should follow the crime, and in each case the inhuman and dastardly criminals are at large in society.

Emma Elizabeth Smith, who received her injuries in Osborn-street on the early morning of Easter Tuesday, the 3rdd of April, survived in the London Hospital for upwards of 24 hours, and was able to state that she had been followed by some men, robbed and mutilated, and even to describe imperfectly one of them.

Martha Tabram was found at 3 a.m., on Tuesday, the 7th of August, on the first floor landing of George-yard-buildings, Wentworth-street, with 39 punctured wounds on her body.

In addition to these, and the case under your consideration, there is the case of Annie Chapman, still in the hands of another jury.

The instruments used in the two earlier cases are dissimilar.

In the first it was a blunt instrument, such as a walking stick; in the second, some of the wounds were thought to have beep made by a dagger; but in the two recent cases the instruments suggested by the medical witnesses are not so different.

Dr. Llewellyn says that the injuries on Nichols could have been produced by a strong bladed instrument, moderately sharp.

Dr. Phillips is of the opinion that those on Chapman were by a very sharp knife, probably with a thin, narrow blade, at least 6in. to 8in. in length, probably longer.

Dr. Llewellyn seems to incline to the opinion that the abdominal injuries were first, and caused instantaneous death; but, if so, it seems difficult to understand the object of such desperate injuries to the throat, or how it comes about that there was so little bleeding from the several arteries that the clothing on the upper surface was not stained, and, indeed, very much less bleeding from the abdomen than from the neck.

Surely it may well be that, as in the case of Chapman, the dreadful wounds to the throat were inflicted first, and the others afterwards.

WHAT WAS THE MOTIVE?

This is a matter of some importance when we come to consider what possible motive there can be for all this ferocity.

Robbery is out of the question, and there is nothing to suggest jealousy; there could not have been any quarrel, or it would have been heard.

I suggest to you as a possibility that these two women may have beep murdered by the same man with the same object, and that, in the case of Nichols, the wretch was disturbed before he had accomplished his object, and having failed in the open street he tries again, within a week of his failure, in a more secluded place.

If this should be correct, the audacity and daring is equal to its maniacal fanaticism and abhorrent wickedness.

But this surmise may or may not be correct, the suggested motive may be the wrong one; but one thing is very clear - that a murder of a most atrocious character has been committed.

The jury, after a short consultation, asked permission to retire, and, after 20 minutes' absence, returned into court with a verdict of wilful murder against some person or persons unknown.

A rider was added expressing the full concurrence of the jury with the coroner's remarks as to the need of a mortuary for Whitechapel."