THE FUNERAL OF CATHERINE EDDOWES 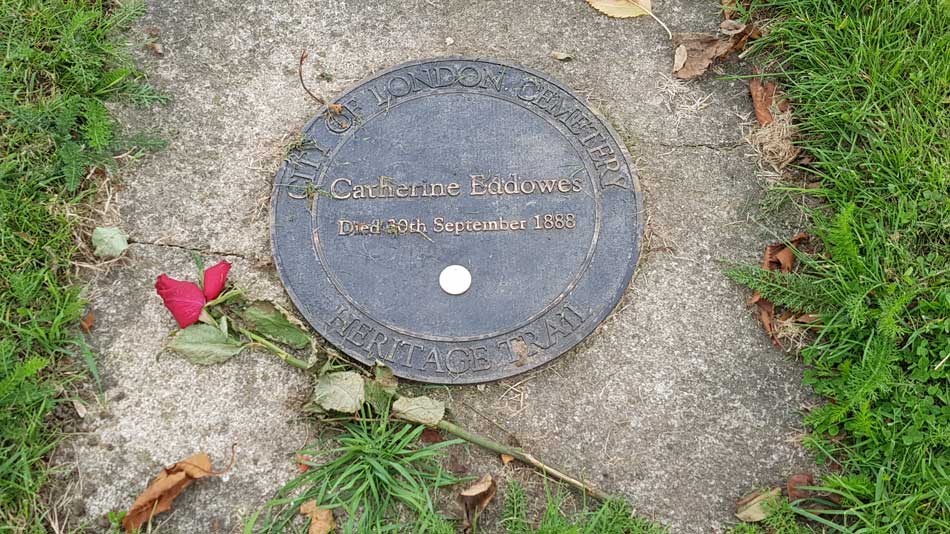 On the afternoon of Monday, 6th October, 1888, the body of Catherine Eddowes began its final journey from the mortuary in Golden Lane, where it had been kept since her murder, to the City of London cemetery, where she was laid to rest.

A REPORT ON THE FUNERAL PROCESSION

Croydon's Weekly Standard carried a full report about the the funeral in its edition of Saturday, 13th October, 1888:-

Trouble arose also with regard to the burial of the murdered woman, her relatives and friends being persons in very poor circumstances.

This, however, was soon overcome, Mr. Charles Hawkes, undertaker, of Banner-street, St. Luke's, offering to defray the entire cost of the interment. His offer was readily accepted by the deceased's relatives, one o'clock on Monday being fixed for the funeral.

Some slight departure, however, had to be made in consequence of the late arrival of some of the deceased's friends. At this hour (one o'clock), there were not more than a score of persons gathered together in Golden-lane; but a quarter of an hour later this number had swelled to several hundreds.

This was to he accounted for by the fact that the dinner-hour had arrived, and hundreds availed themselves of the opportunity of catching glimpse of the mournful Cortege.

Five minutes later an open hearse drove up to the mortuary gates, followed at some distance behind by a mourning coach.

The body of the deceased woman, which had been placed in a handsome polished elm coffin, surmounted with a plate in gilt letters, with the following inscription, "Catherine Eddowes, died September 30th, 1888, aged 43 years," was then brought out of the mortuary and placed on the funeral car.

Considerable sympathy was manifested by those admitted within the walls of the mortuary for the deceased's relatives, all of whom were neatly attired in black, and who wept bitterly as this part of the painful ceremony was being performed.

The deceased was followed to the grave by her four sisters, Harriett Jones, Emma Eddowes, Eliza Gold, Elizabeth Fisher, her nieces, Emma and Harriett Jones, and John Kelly, the man with whom she had cohabited, who, like the rest of the mourners, was dressed in black.

Punctually at half-past one the hearse moved away from the mortuary, followed by a mourning coach, in which was seated the deceased's sisters, the third vehicle - a brougham - containing the representatives of the press.

Never, perhaps, has Golden-lane and the precincts of the mortuary presented a more animated appearance.

The footway was lined on either side of the road with persons who were packed in rows five deep, the front row extending into the roadway.

Manifestations of sympathy were everywhere visible, many among the crowd uncovering their heads as the hearse passed.

A strong body of City police, under the supervision of Mr. Superintendent Foster and Inspector Woollen, kept the thoroughfare clear, and conducted the cortege to the terminus of the City boundary.

On reaching Old-street the funeral car was met by a body of the Metropolitan Police, who, under the direction of Inspector Burnham, of G division, kept the roadway clear for its passage.

Emerging into Whitechapel-road, the cortege passed slowly through a densely packed mob, which lined the roadway on either side, and extended as far as St. Mary's Church.

The sympathy shown here was more marked than at any other point of the route, the majority of the women having no covering to their heads, whilst a number of rough looking labouring men removed their caps as the body passed.

Opposite Whitechapel parish church a number of policemen were drawn up, it being rumoured that a demonstration might be attempted.

Beyond the marks of sympathy referred to, however, nothing whatever occurred, and the services of the police were consequently not brought into requisition.

The cortege then proceeded rapidly along the Mile End Road, almost unobserved, and, after passing through Bow and Stratford, it turned into the Ilford main road, reaching the cemetery shortly before half-past three, where the body was buried.

The service, both in the chapel and at the grave, was conducted by the Reverend T. Dunscombe, the cemetery chaplain, who made no reference to the murder."

BURIED IN THE CITY OF LONDON CEMETERY

Although no trace of her grave exists today, the Cemetery authorities do maintain a memorial plaque to her in the Cemetery's Garden of Remembrance, to which a regular stream of visitors make their way in order that they may pay their respects.

A Clue Is Found