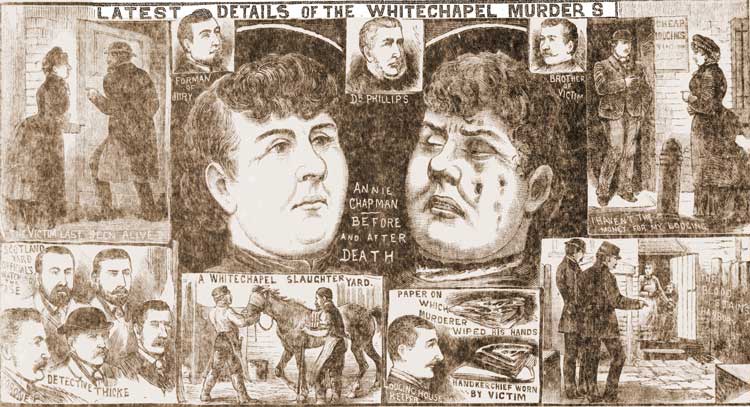 NO MONEY FOR A BED

At around 7pm on 7th September 1888 Annie turned up at Crossingham's Lodging House and asked Timothy Donovan if she could sit in the kitchen.

Since he hadn't seen her for a few days he asked where she had been. "In the infirmary," she replied.

He allowed her to go to the kitchen where she remained until the early hours of the next morning.

Shortly after midnight Donovan sent John Evans to the kitchen to collect the money for her bed.

He found her eating potatoes and a little the worse for drink.

When he asked her for the money she wearily replied "I haven't got it. I am weak and ill and have been in the infirmary."

EJECTED FROM THE LODGING HOUSE

Realizing that further discussion was futile, Annie turned to leave, but as she did so she asked him to save the bed, adding that "I shall not be long before I am in." She stood for a few minutes in the doorway and reiterated her point "I shall soon be back, don’t let the bed."

John Evans escorted her off the premises and watched her as she went, observing later that she was not drunk, but was slightly tipsy. She headed through Little Paternoster Row, turned right along Brushfield Street and walked towards the looming, almost sinister, bulk of Spitalfields Church.

WAS SHE IN THE TEN BELLS?

"Dark Annie," as she was known locally, was evidently confident that she could quickly earn the money from prostitution, but her movements for the next three or so hours have never been established.

Later that day one of the bar staff at the Ten Bells pub, at the junction of Commercial Street and Church Street (today’s Fournier Street), told a journalist that a woman answering Annie Chapman's description had stopped in for a drink at around 5am, when a man in a "little skull cap" popped his head round the door and called her out. The veracity of this sighting is difficult to ascertain.

A SHORT WALK TO HANBURY STREET

What is certain is that by 5.30am Annie Chapman had made her way to Hanbury Street, just a short distance away from the Ten Bells.

The four storey houses that lined Hanbury Street had front doors that opened into narrow passageways which squeezed past the staircases, and led directly to the backyards.

The rooms were let out to individual tenants and their families. Since many of them worked all hours of the day and night, the front doors tended to remain open all night long, a fact that didn’t go unnoticed by the local prostitutes who frequently led there clients either into the backyards of the houses, or even used the hallways and landings for what the Coroner at Annie Chapman's inquest described as "immoral purposes."

Number 29 was typical of the houses that lined the street, and seventeen occupants were crowded into its eight rooms. 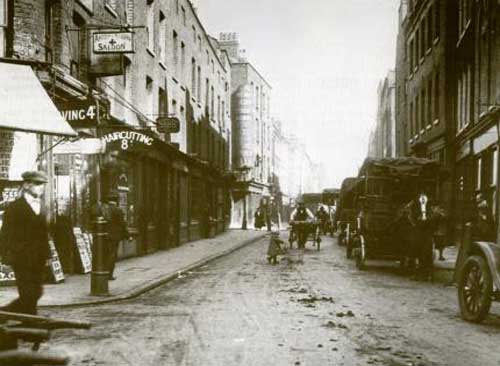 At between 4.40am and 4.45am John Richardson, son of Amelia Richardson one of the residents at number 29 Hanbury Street, who also ran a packing case business from the premises, stopped off at the building on his way to work to check the yard from which his mother operated her business

A few months previously someone had broken the padlock on the cellar door in the back yard and ever since he had regularly visited the premises to check that all was well.

On this particular morning one of his boots was pinching his toe so he sat down on the step to trim off some of the leather with a table knife.

From where he was sitting he could see that the padlock to the cellar door was intact, and standing up again, he set off for work.

He later estimated that he had sat on the step for two or so minutes and had been aware of nothing suspicious or out of the ordinary. 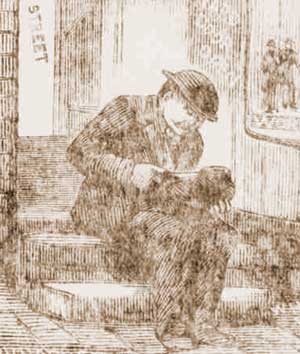 John Richardson On The Back Step 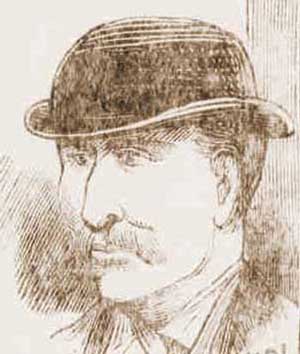 At some stage between 5.15 am and 5.32 am, Albert Cadoche, a carpenter who lived at number 27 Hanbury Street, went out into the back yard of his premises.

As he returned towards the back door he heard a woman’s voice say "No."

He couldn't be certain exactly where it had come from, but thought it was from the yard of No. 29 next door.

Cadoche went indoors, but returned to the yard three or four minutes later at which time he heard something fall against the fence that divided the yards of numbers 27 and 29. "It seemed as if something touched the fence suddenly," he told the inquest.

He did not, however, look over the fence but instead went back through the house and set of for work along Hanbury Street at the end of which he turned right along Commercial Street.

Here he looked up at the clock of Christchurch Spitalfields and saw that it was 5.32am.

Just after the nearby brewery clock chimed 5.30am, Mrs Elizabeth Long, also referred to as Elizabeth Darrell, turned out of Brick Lane and walked along Hanbury Street en route for Spitalfields Market.

Just before reaching the door of number 29 she noticed a man and a woman talking on the right hand pavement.

She didn't see the man's face, only his back, but she described him as being of foreign appearance with a dark complexion. He was, she later stated, of shabby genteel appearance, aged about forty, and not much more than five foot in height. He had on a dark overcoat, and wore a brown deerstalker hat.

Since the woman was facing her, she saw more of her and, when taken to see Annie Chapman's body at the mortuary, was certain she was the woman she had seen.

Mrs Long later told the inquest that the couple "were talking pretty loudly" and so she overheard the man say in a foreign accent, "Will you?" To which the woman replied, "Yes."

But since, as she later told the Coroner, it was quite common for her to see couples "standing there in the morning," Mrs Long found nothing suspicious about the couple, and continued on her way.

1st May, 1869 - Married John Chapman at All Saints Church, Knightsbridge.

1880 - A son, John Alfred Chapman was born. Sadly, John was a cripple and was put into a home.

1884 or 1885 - The couple separated and Annie returned to live in London. John, off and on, continued to support her with a sporadic allowance of 10 shillings a week.

1886 - Annie took up with a sieve maker by the name of John Sivvey and the couple moved into a common lodging house at 35 Dorset Street, Spitalfields.

25th December, 1886 - John died of cirrhosis of the liver and, thereafter, the allowance ceased.

January, 1887 - Sivvey broke off their relationship and moved to Notting Hill.

From May, 1888 - Annie was an almost permanent resident at Crossingham's lodging house, 35 Dorset Street, Spitalfields.

June - September, 1888 - Annie was involved in a relationship with Edward Stanley, a bricklayer's assistant, of 1 Osborn Place, Whitechapel. The couple would spend weekends together at Crossingham's lodging house.

Late August, 1888 - She met her brother, Fountain Smith on Commercial Road, Whitechapel and told him that she was "hard up." She refused to tell him where she was living. He gave her two shillings.

September 1st, 1888 - Stanley returned to the area and met her at the corner of Brushfield Street.

Early September, 1888 - Annie had a fight with fellow lodger Eliza Cooper and was left with a black eye and bruising to the chest.

September 3rd, 1888 - Amelia Palmer met her in Dorset Street and commented on her black eye and bruised right temple. Annie opened her dress and showed her the bruising on her chest. She told Amelia that she was feeling unwell and that she might go and see her sister to get a pair of boots so that she could go hop picking.

September 4th, 1888 - Amelia Palmer met her again, near Christchurch on Commercial Street. Annie complained of feeling extremely unwell, and said that she might go to the casual ward for a few days to recover. She mentioned that she had not had anything to eat or drink all day, and Amelia gave her two pence, warning her not to spend it on rum.

September 7th, 1888, 11.30pm - Annie turned up at Crossingham's lodging house, on Dorset Street, and asked if she could sit in the kitchen, a request that was granted.

September 8th, 1888, 1.35am - She went to the office of the deputy lodging house keeper, Timothy Donovan, and explained that she had no money to pay for her bed for that night. He told her that if she couldn't pay she couldn't stay, and she left, vowing to return shortly with the money and urging them to see that they keep her bed.

September 8th, 1888, 5.30am - Mrs Elizabeth Long was walking along Hanbury Street, Spitalfields, when she passed Annie Chapman talking to a man, directly outside number 29 Hanbury Street. She heard the man say "Will you?", to which Annie replied "Yes."