THE JACK THE RIPPER VIRTUAL TOUR

EXPLORE THE STREETS FROM YOUR HOME

Join this site's author Richard Jones for a virtual tour around the London haunts of Jack the Ripper.

Using HD footage of the streets of East London as they are today, you can sit in the comfort of your own home, and watch as Richard leads you back to the autumn of 1888, on an interactive tour that allows you to not just watch the tour, but to also participate by asking questions and putting forward your own theories on the case.

The tour is done via ZOOM. Once you have made your booking you will be sent a link for your tour along with a password that will allow you to join the tour.

Richard will begin with a brief introduction, during which he will set the scene and give you an idea of what the area was like at the time of the murders.

You will then watch as the HD footage begins to play, and you will get the genuine and eerie impression that you are actually walking through the streets of East London.

Furthermore, Richard will use black and white photographs of the locations you will be seeing to show you how they were at the time of the Jack the Ripper crimes. It will be just like travelling back through time to that long-ago era of gaslight and shadows, when the Ripper brought terror and panic to the neighbourhood.

Richard will take you through the story of the Whitechapel Murders, which actually began in April, 1888, with the murder of Emma Smith. You will watch as the camera traces her footsteps to the very spot where she was attacked and assaulted so brutally that she later died from her injuries.

Following an initial outpouring of revulsion, her murder was largely forgotten, until, in early August, 1888, just a short distance from where poor Emma Smith has been attacked, Martha Tabram was murdered, and the people of Whitechapel became uneasy at the thought that something decidedly untoward was occurring in their district.

That unease gave way to outright terror and panic when, on the last day of August, 1888, the body of Mary Nichols was found in a gateway in Buck's Row, Whitechapel, and Jack the Ripper's reign of terror began.

Buck's Row Where Mary Nichols Was Murdered on 31st August 1888.

THE JACK THE RIPPER MURDERS

It was with the murder of Mary Nichols that the police began a massive hunt for the perpetrator of the atrocities, and Richard will introduce you to some of the Police Officers who tried to bring the killer in their midst to justice.

However, their efforts proved futile and, one week after the murder of Mary Nichols, the body of Annie Chapman was found in the backyard of 29 Hanbury Street.

Richard will build the tension, as he tells you about the police activity in the area, and discusses how the newspapers discovered that their readers were ever eager for news of the killings and began sensationalizing the crimes.

However, the increased police presence in the area in the wake of Annie Chapman's murder appears to have deterred the killer, and the people of the East End enjoyed a brief respite from their autumn of terror.

THE NIGHT OF THE DOUBLE MURDER

But then, on 30th September, 1888, the killer returned and carried out two further murders - killing Elizabeth Stride in Berner Street and Catherine Eddowes in Mitre Square.

You will see footage of both locations as they are today, and Richard will use black and white photographs and contemporary sketches to illustrate what they were like in 1888. 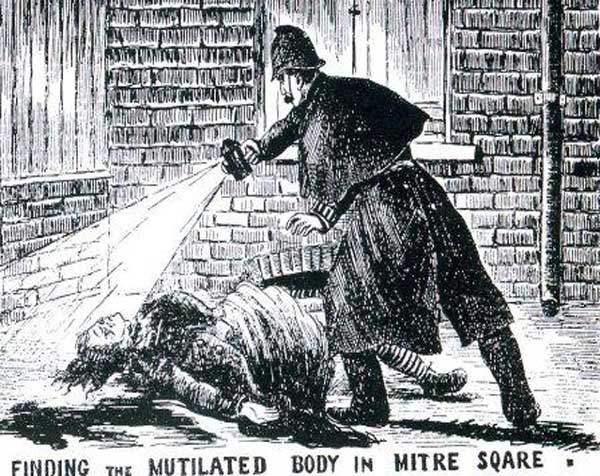 THE JACK THE RIPPER LETTERS

In the wake of the "Double Murder" the police released a letter, purporting to have come from the killer, in which he boasted about evading the police and taunted them that he wanted to "get to work again.". But he also, signed the letter "Jack the Ripper"; and, when the letter, quite literally, went viral, the murders became an international phenomenon, and the legend of Jack the Ripper was born.

Richard will discuss the letter - and several other letters, including the notorious "From Hell" letter that was sent to Mr. George Lusk, the head of the Mile End Vigilance Committee, and which, infamously, was sent along with a piece of kidney. 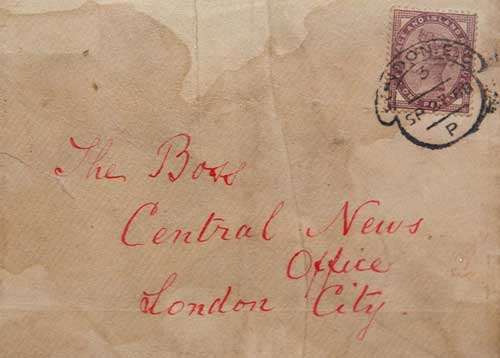 The Envelope That Contained The Letter

THE MURDER OF MARY KELLY

The increased police activity on the streets of Whitechapel, appears to have once again deterred the killer, and, in consequence, October passed with no further murders.

But the, on the 9th of November, 1888, the horrifically mutilated body of Mary kelly was found inside her room at 13 Miller's Court, off Dorset Street.

This was the most gruesome killing of them all, and it truly shocked the police and public alike,

But this murder also proved to be Jack the Ripper's swansong. This begs the question, what happened to stop him killing?

Richard will discuss various possible theories as to what became of the killer after the bloodbath in Miller's Court and will end the tour by highlighting some of the major suspects.

At the end of the tour, you will be sent a link to a specially prepared online quiz about the information you will have learnt during the course of your virtual tour.

Once you have completed it, you will be presented with a certificate detailing the day on which you took the quiz, and the score that you achieved.

A WALK WORTH INVESTIGATING ®

So Join Richard Jones, for a journey through the London of Jack the Ripper, and get the full story of the killing spree that created London's most infamous murder mystery.

Dates And Bookings
Book The Tour

The tour is conducted via ZOOM.

Dates And Bookings
Join The Conversation
Search For Information