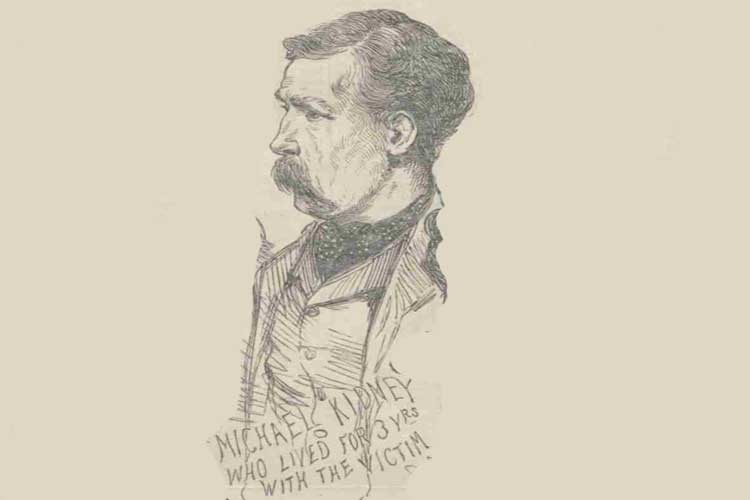 Michael Kidney met Elizabeth Stride in 1885 and, thereafter, they had an off and on relationship until her death.

He gave evidence at the inquest into her death, and, it must be said, his rambling testimony was, to say the least, slightly bizarre.

Lloyd's Weekly Newspaper published the following synopsis of his testimony in its edition of Sunday, 7th October, 1888:-

I live at 38, Dorset-street, Spitalfields. I am a waterside labourer.

The Coroner:- "Have you seen the body in the mortuary?"

The Coroner:- "Is it the woman you have been living with?"

The Coroner:- "Do you know what her name was?"

The Coroner:- "How long have you known her?"

The Coroner:- "How long has she been living with you?"

Nearly all the time.

The Coroner:- "Do you know what her age was?"

The Coroner:- "Did he ever keep a coffee-house?"

She told me he did at Chrisp-street, Poplar, and that he was drowned in the Princess Alice disaster.

The Coroner:- " Was the roof of her mouth deficient?"

The Coroner:- "When did you last see the deceased alive?

On Tuesday week. I left her on friendly terms in Commercial-street, as I was coming from work between nine and 10 o'clock at night. I got home half an hour afterwards, and she had been in and gone out. I did not see her again until I saw the body at the mortuary. She left me through drink. She had done it before and come back. I treated her the same as I would a wife.

Having given his evidence, the witness, in a somewhat mysterious manner, complained that he had gone to the police-station in Leman-street and asked to be allowed to have the assistance of a trained detective, as he could catch the murderer, but they would have nothing to do with him.

Inspector Reid:- "Were you intoxicated?"

The Coroner:- "What information have you?"

Witness I have heard something said which would lead me to get a good deal more information if I had police help.

A Juror:- "You must have had special information to have wanted a detective."

The Coroner:- "Well, give us your information; we are all interested in catching the murderer?"

Witness:- I believe I could capture him if I had control of the force. If I could place 100 men, the murderer would be caught in the act.

Inspector Reid:- "But you have no information to give."

Witness:- If I placed the men, one of them would catch him in the act.

Further questioned, the witness said:- Mrs. Malcolm very much represents the appearance of the deceased woman. She told me that a policeman used to court her when she was staying at Hyde Park, and before she was married to Stride.

She never had a child by me, and I never heard of her having a child by the policeman. She said she had had nine children. Two were drowned on the Princess Alice, and the remainder were in a school in connection with the Swedish Church on the other side of the Thames. I have heard her say that some friends of her husband had some of the children.

The Foreman of the Jury:- "Do you think she was selling the truth when she said she was Swedish?"

Yes; I firmly believed she was a Swede. Deceased and her husband were employed on the Princess Alice."