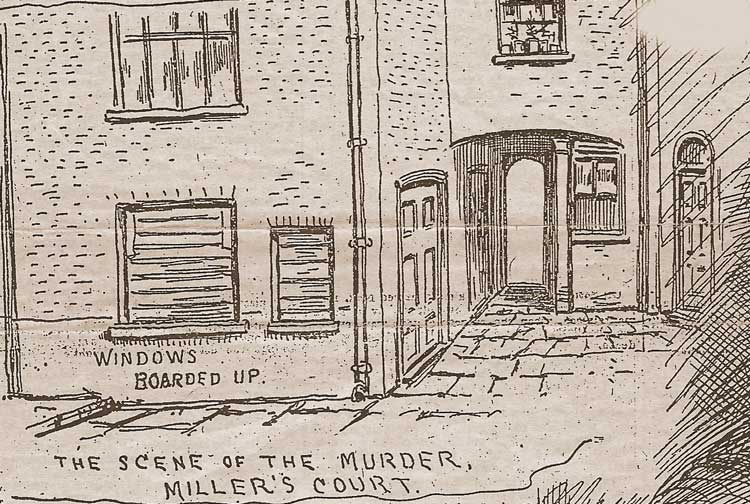 Lizzie Albrook is one of those witnesses who may, or may not, have existed.

She is mentioned in numerous newspapers, in articles that were published in the wake of the murder of Mary kelly, which took place on Friday, 9th November, 1888, but the story of her statement is obviously a syndicated article, which several newspapers attributed to the Central News.

According to the article, as it appeared in the newspapers, Lizzie Albrook was twenty-years old, resided in Miller's Court, and worked at a common lodging house in Dorset Street.

She claimed to have been on friendly terms with Mary kelly, on account of the fact that they were "near neighbours."

She had, allegedly, told the reporter who had interviewed her that, she had spent time with Mary kelly on the evening before her murder. As they chatted, Mary had warned her against going out on the streets, as she had done. Mary, so Lizzie recalled, was heartily sick of the life she was leading and lamented the fact that she didn't have the money to give it up.

Lizzie Albrook, a young woman of 20, who resides in Miller's-court and works at a lodging-house in Dorset-street, also made the following statement:-

"I knew Mary Jane Kelly very well, as we were near neighbours.

The last time I saw her was on Thursday night, about eight o'clock, when I left her in her room with Joe Barnett, who had been living with her.

About the last thing she said was, "Whatever you do don't you do wrong and turn out as I have."

She had often spoken to me in this way, and warned me against going on the streets as she had done.

She told me, too, that she was heartily sick of the life she was leading, and she wished that she had money enough to go back to Ireland, where her people lived.

I don't believe she would have gone out as she did if she had not been obliged to do so in order to keep herself from starvation.

She had talked to me about her friends several times, and, on one occasion, she told me that she had a female relation in London who was on the stage.

Of course, reading the full story, you can almost see it as Victorian melodrama.

The tragic murder victim who had wanted to leave behind her life of immorality and return to the bosom of her family in Ireland. The warning to a younger woman to avoid the life she [Mary kelly] was leading, at all costs.

So, on reading this, you cannot help suspecting that it might have been a fabrication by a journalist, which, given its themes of regret, tragedy and brutal murder, was duly picked up by newspapers across the country.

It has to be said that efforts to trace a Lizzie Albrook in the public records have proved unsuccessful, so there is a chance that she never actually existed.

However, she also gets a mention in the autobiography of one of the first police officers on the scene of the murder of Mary kelly.

Writing in his memoirs I Caught Crippen, many years later, by then Ex-Chief Inspector Walter Dew had this to say about Mary Kelly's last night and her exchange with Lizzie Albrook.

Again, it is apparent that Dew is ramping up the tragedy of Mary Kelly's last hours and of her regret for the life she was leading.

He also includes another favoured device of authors of melodrama, a premonition of what was to come:-

Just the night before, Marie had been fearfully discussing the killer of her kind with Lizzie Albrook, a nineteen-years-old friend.

"This will be the last Lord Mayor's show I shall see," said Marie tearfully. "I can't stand it any longer. This Jack the Ripper business is getting on my nerves. I have made up my mind to go home to my mother. It is safer there."