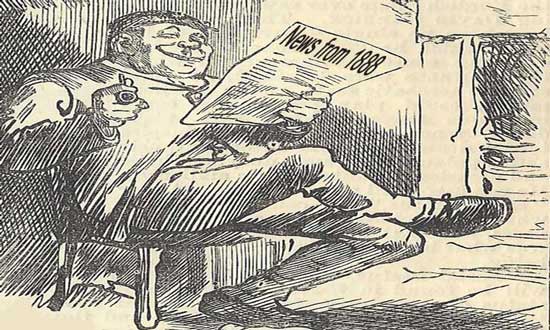 The Eastern Post and City Chronicle in their issue of 30th June 1888 alerted readers to Tragedy in the Commercial Road. The subsequent article reported that:-

On Monday the attention of the inhabitants of grove Street, Commercial Road, was drawn to the house, No 18, inhabited by a labouring man named Richard Paterson, by a number of shrieks.

As the storm was at its height, it was thought some one inside had been struck by lightning. A lodger in the house, however, soon dispelled this idea by standing at the door and proclaiming the fact that Paterson had cut his wife's throat and severely gashed the face of her brother, who attempted to prevent the occurrence.

The attention of the police was at once arrested, and the woman was conveyed to the London Hospital, where she expired.

The brother was taken to the same institution later on, and it hoped he may recover.

Paterson, who immediately made his escape, is 26 years of age, medium height, and fair complexion. It is said that he bears a very bad character.

A few months ago he lost a child by her accidently drowning in a washing tub, and to assist him in defraying the expenses consequent on the funeral a "friendly lead" was got up for him.

He has taken his little boy with him.

The police are now actively engaged in exploring the lodging and other houses of resort in the locality, feeling confident he cannot be far off, as he had not anything like a large sum of money about him.

the only motive assigned for the man's conduct is jealousy; but the neighbours give the deceased woman a character precluding a foundation in fact for any such belief.

The same newspaper carried a second article which repeated, more or less word for word, the above report except, that it added that:-

...before he was married, in the course of a quarrel with his victim,[he had] stabbed her, marrying her only to avoid the prosecution with which he was threatened...

The East London Observer reported on a case before the Thames Police Court which demonstrates, again, the dangers faced by the everyday Police Constables whose unenviable job it was to enforce law and order in a district, parts of which, were utterly lawless.

John Canavan, 20, was charged with being drunk, disorderly, and assaulting Police-constable 342-K while in the execution of his duty.

On Sunday night the prisoner, who was drunk, and others, were singing an indecent song in Burn-street, Limehouse. The constable requested them to go away, when prisoner became very disorderly, and struck at the officer. The latter warded off the blow, and pushed prisoner away.

Canavan again struck the policeman, who arrested him, but he wrenched himself free.

Canavan and about 17 others then stoned the constable who was alone.

One of the stones prisoner threw caught the officer on the shoulder, cutting his tunic and hurting him very much.

Police-constable 32 H R, arrived on the spot, where all the men ran away, but prisoner was caught.

The neighbourhood in which the assault was committed was a most dangerous one, and it was not safe for a constable to go there alone.

Mr Hannay, in fining the accused 40s, or one month's hard labour, said he was not sure he was doing right by not sending him to prison without the option of a fine.

A VISIT TO TOWER BRIDGE

By way of a brief respite from the shocking and depressingly regular occurrences of violence in the East End of London in 1888 the East London Observer reported on the a visit that had been paid to the site from which Tower Bridge would, within 10 years, be spanning the River Tames from north to south.

An opportunity was afforded on Tuesday in inspecting the works in connection with the erection of the Tower-bridge, on the occasion of a visit by members of the Society of Engineers.

The Tower-bridge, which will cross the Thames from Little Tower Hill on the north side, is intended to facilitate the traffic across the river eastward of London Bridge, and although the work was begun two years ago it is expected that it will be three years yet before the bridge is completed.

Meanwhile the East London Observer carried a report of an Alleged serious assault:-

Geo. Glead, 20, was charged with being drunk and assaulting Anne Seeley, of 4 Tuson's-place, Limehouse.

Prosecutrix said that about twelve o'clock on Monday night she was passing along the East India Dock-road, when prisoner met her, caught hold of her by the hair of her head, and punched her several times in the face.

Prisoner then dragged her down a court by the hair of her head, knocked her down, and kicked her about the chest on many occasions. She then gave him into custody.

Police constable 175 K said he saw prosecutrix strike prisoner just before she gave him into custody.

Mr Hannay had a doubt as to whether the accused committed the assault and discharged him.

Apparently it wasn't unusual for people to go around the East End carrying loaded revolvers whilst drunk, according to a report from the Thames Police Court carried in this week's East London Observer.

Thos Turner, 30, no occupation of 1 Mercer-street Shadwell, was charged with feloniously discharging a loaded revolver at Ellen Martin with intent to do her grievous bodily harm, inside the house, 7 Albert Street, Shadwell.

Prosecutrix, a smart looking young woman, deposed that she was an unfortunate.

On Monday night the accused went home with her, and at that time was rather the worse for drink. She had known Turner for three weeks.

Witness took off her cloak and hat and the prisoner got noisy.

Previous to that they had been to a music hall together, and they had a few words owing to witness giving the cabman sixpence extra.

After taking off her cloak, Turner said "I mean to do for you. It is either your life or mine."

He then took a revolver from his American pocket. Prisoner then fired at witness who was about four yards off. She screamed and a lot of people ran to the stairs. Turner tried to run down, but was stopped, and was afterwards given into custody.

By Mr Williams (magistrates Clerk): She believed Turner only wanted to frighten her. She knew that Turner carried a revolver. Witness had previously been to music halls with Turner, and afterwards ran away from him.

Alice Solomons, the landlady of the house, said she heard Turner say to the prosecutrix, "Look out! You have been tantalizing me since Saturday. No I'm going to make a fool of you to-night."

Witness afterwards heard them quarrelling and then a revolver went off.

Some men then ran into the house and got hold of the prisoner, who said, "I didn't mean to shoot you missis, or her either. I only pointed at the floor to frighten her."

Turner had been very kind to the prosecutrix.

Sergeant Owen, 5 H, sated that he heard cries of "Murder" and "Police".

On going to the house he found the accused being held by several men. Witness asked Turner, who was very violent, where the revolver was. he answered "I will shoot every God damn one of you. I haven't got a revolver about me." Witness searched him, and took the revolver from the pocket behind his trousers. Prisoner was then conveyed to the station.

When at the station Prisoner tried to throw himself out of the dock, saying, "I have got another revolver in my pocket. I will shoot the lot of you."He then became so violent that he had to be handcuffed. On him was found a knife and other things.

Prisoner: They stole my purse, in which were tow half-sovereigns, when I was in the cell.

Inspector Blake said he examined the revolver. Four of the chambers had cartridges in them, and one had recently been exploded. The cartridges had bullets in them.

he afterwards went to the house and prosecutrix showed him where she stood when Turner fired at her.

In line with her head there was a bullet hole in the wall. There was no mark from a bullet on the floor.

Mr Hannay had the accused put back for the room to be carefully examined. Later in the day, Inspector Blake attended, and said on removing the carpet in the room, he found the bullet produced embedded in the floor, which clearly proved prisoner fired at the floor. The bullet corresponded with those found in the revolver.

Mr Hannay said that evidence cleared the prisoner of a very grave charge.

Prisoner, like several persons, went about with a loaded revolver whilst drunk, and it was perfectly marvellous more serious cases of wounding were not brought before the magistrates.

No it appeared that, drunk as the prisoner was, he only shot down at the floor in order to frighten the prosecutrix.

Prisoner would be discharged.