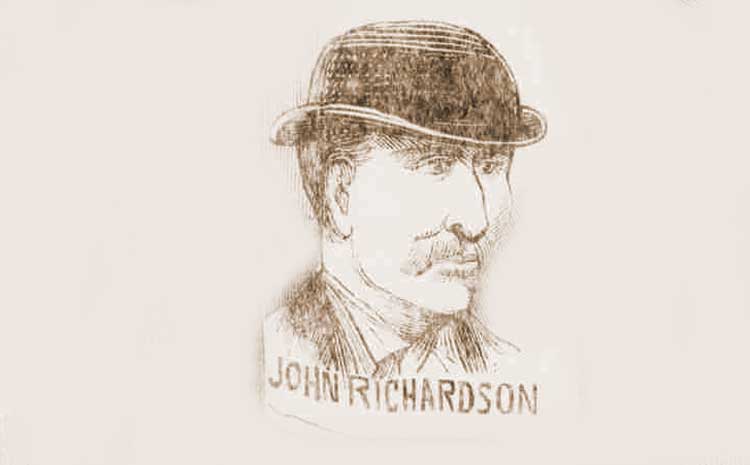 VISITED THE YARD OF 29 HANBURY STREET

John Richardson, of 2, John Street, Spitalfields, was the son of Amelia Richardson. He worked in his mother's packing case business, which she ran from the cellar of 29 Hanbury Street, the entrance to which was located in the backyard, close to the spot where Annie Chapman's body was found.

He had visited the yard at around 4.45am on the morning of the 8th September, where, having found everything to be in order, he sat down on the back step, next to where Annie's body would be found a few hours later, and trimmed a piece of leather off his boot with an old table-knife. He was adamant that the body had not been there at that time.

The fact that he had visited the site of the murder on the morning on which the crime had taken place; and had, by his own admission, been in possession of a knife whilst there, meant that he was subjected to a fairly harsh bout of question by the Coroner, Wynne Edwin Baxter.

The East London Observer, opined on his inquest testimony in its edition of on Saturday, 15th September, 1888:

John Richardson, a tall, stout man, with a very pale face - the result, doubtless, of the early hours he keeps as a market Porter - a brown moustache, and dark brown hair. He was shabbily dressed in a ragged coat, and dark brown trousers.

He was another motionless witness, giving his evidence quietly - as quietly, at all events, as was consistent with a severe cold and a very hoarse voice.

The Coroner was a very severe on him over the story of the knife with which he had cut a piece of leather off his boot before five o'clock on Saturday morning, on the stone steps near which the body was found.

He wanted to know why he had the knife, why he should put a table knife in his pocket, and altogether made the witness look very uneasy and very uncomfortable.

His discomfort was increased when, at the suggestion of the Coroner, he was sent off in charge of Inspector Chandler to find the knife with which he had cut the leather off his boot."

The next day, Lloyd's Weekly Newspaper, provided more detail of his inquest testimony:-

John Richardson, John Street, a porter in Spitalfields Market, said:- On Saturday, I was at 29, Hanbury street about 4:40 a. m or 4:50 a.m.. I went there to see that all was right. I only go on market mornings, because I am out early.

Some months ago, the cellar was broken into.

The front door was closed. I lifted the latch and went through the passage to the yard. I did not go into the yard, I opened the yard door and sat on the steps to cut off a piece of leather from my boot. I used an old table-knife to cut the leather. I had been cutting up carrots for my rabbit, and I put the knife into my pocket. I do not usually carry it about with me in my pocket. It must have been a mistake on my part.

I did not go into the yard, and went away. The yard door closes itself. I shut the front door when I went away. I was there altogether about two minutes. It was not quite light, but I could see all over the place. I could not have failed to have noticed the deceased, had she been there then.

I afterwards saw the body. That was after the doctor had come. I heard of the murder when I was in the market.

I could see the cellar door without going into the yard. The padlock was on it all right. That was the sole object I had in going there. I sometimes look in if I am going home late at night.

When I sat on the steps I was close to where the woman was found. I have been there are at all hours of the night.

Coroner:- "Have you seen any strangers there?"

Witness:- "Yes, men and women. I turned them out. I have seen them lying on the landing."

Coroner:- "Do I understand that they go there for an immoral purpose?"

Witness:- "Yes; I have caught them in the act.

Witness then left the court to fetch his old table-knife."

HIS KNIFE EXAMINED BY THE JURY

The East London Observer reported on what transpired when he returned to court with the said knife:-

John Richardson having returned at this point, red and out of breath, produced the rusty little table knife without a handle, which was closely examined by the jury without remark.

HE CAME OUT WELL

Despite the hostile interrogation from the Coroner, John Richardson handled himself well and the journalist from The East London Observer who was covering the proceedings, seems to have been quite impressed by him:-

John Richardson, the young man already alluded to, was closely examined as to his business in the yard on the morning of the murder.

Richardson's appearance and his hoarse voice were not altogether prepossessing, and the Coroner appeared to think that the circumstances of his visit required explanation. It was not quite daylight, and he went in to see that the cellar was locked.

He admitted that he had a largish knife in his coat pocket, and that all he did in the yard was to glance at the padlock of the cellar, and cut a piece of leather off his boot.

The knife he was sent back to fetch was impounded, but he came on the whole very well out of his cross-examination.