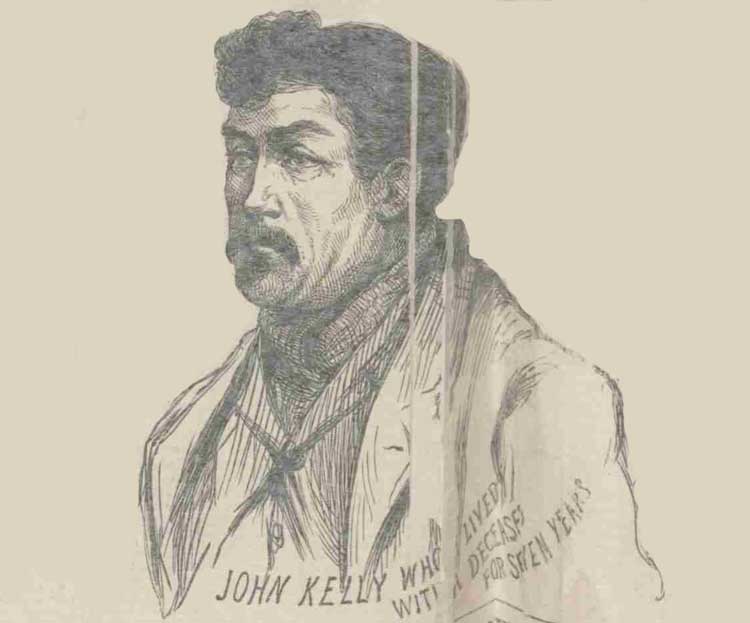 John Kelly and Catherine Eddowes had known each other since 1881, and for much of the time up to her death on 30th September, 1888, they had lived as husband and wife at a common lodging house in Flower and Dean Street.

Although he had heard about the murder in Mitre Square, he did not immediately connect the victim with his lover, and, in consequence, it wasn't until the Tuesday after the murder that he turned up at Bishopsgate Police Station, from where he was immediately taken to the Golden Lane Mortuary, where he identified the body as that of Catherine Eddowes.

Lloyd's Weekly Newspaper broke news of his coming forward in its edition of Sunday, 7th October, 1888:-

On Tuesday night a labouring man, giving the name of John Kelly, 55, Flower and Dean-street - a common lodging house - entered the Bishopsgate-street police-station, and stated that he believed that the woman who had been murdered in Mitre-square was his "wife."

He was at once taken by Serjeant Miles to the mortuary in Golden-lane, and there he identified her as the woman, to whom he subsequently admitted he was not married, but with whom he had cohabited for seven years.

In answer to questions, he stated that the last time he saw her - referring to her as "Kate" - was on Saturday afternoon. He left her, believing that she would return to him at the lodging-house in Flower and Dean-street.

He had told her to go and see her daughter, and to try and get "the price of a bed for the night."

"Who is her daughter?" he was asked, to which he replied. ";A married woman. She is married to a gun-maker, and lives in Bermondsey, in King-street, I think it is called; but I never went there."

Being asked why he had not made inquiries before relative to her absence on Saturday night and since, he replied that he thought she had got into some trouble and had been locked up.

The reason which had induced him at length to call at the police-station was his having read about pawn-tickets being found near the murdered woman relating to pledges in the names of Kelly and Birrell."

The newspaper went on to publish a synopsis of the testimony that he gave at the inquest into Catherine Eddowes death:-

John Kelly, of 55, Flower and Dean-street, said he was a labourer, and earned a living jobbing about the markets.

He recognised the body of the deceased. He knew her as Catherine Conway, and had known her for seven years. They had lived together during that time at a lodging-house kept by John Coonev. She used to sell a few things about the street. He saw her last at two o'clock on Saturday afternoon in Houndsditch, and left her there on very good terms.

The last words she said were that she was going to try to find her daughter Annie in Bermondsey. Annie was a daughter she had had by Conway.

She promised to return by four, not later, but she did not return.

On inquiring about, he heard that she had been locked up in Bishopsgate police-station. An old woman working in the lane told him she had seen her taken along Houndsditch by two police, but he did not go to the police-station to inquire, making sure she would be out in the morning, as it was in the City. He was told it was "a drop of drink" she was locked up for.

He had never known that she went out for immoral purposes.

He was not in the habit of drinking to excess - at least, ";only slightly."

When he left her she had not any money. She was going to her daughter's with a view to trying to get some money. She was not in the habit of doing so, but went on this occasion because they had nothing to pay for lodgings with. It had happened that they had no money, and had been obliged to walk about the streets all night. It was to prevent this on Saturday night that she went to try to find her daughter.

He did not know if she had seen Conway of late. He had never seen the man at all.

In answer to the foreman of the jury, witness said that the deceased usually returned to the lodging-house about eight or nine o'clock; and, in answer to the City Solicitor, he said he had not heard with whom she had been drinking on Saturday afternoon.

She had never stayed out all night, except on one occasion when they had a few words and she left him.

They were not together on Friday night. Deceased slept in the casual ward at Mile-end workhouse, and witness slept at the lodging-house.

They were not together at the lodging-house any night that week. In the early part of the week they were both hop-picking in Kent. They had earned no money and had walked back to London, arriving, on Thursday, and sleeping at the casual ward in Shoe-lane.

They were together all Friday, until the afternoon, when he earned sixpence. He wanted her to remain with him, but she insisted on his going to the lodging-house with the money whilst she went to Mile-end.

He met her at about eight o'clock the next morning, and was surprised to see her so early. They pawned a pair of boots for half-a-crown on Saturday morning. She was quite sober when she left him. They spent the half-crown in drink and food, and when she left him they had no money. They parted without angry words.

Afterwards, in answer to Mr. Crawford, he said it might have been Friday that the boots were pawned. Deceased pawned them, and he stood outside in his bare feet. It was Friday on the pawn-ticket, but the witness admitted he was a little bewildered, and did not remember very well."