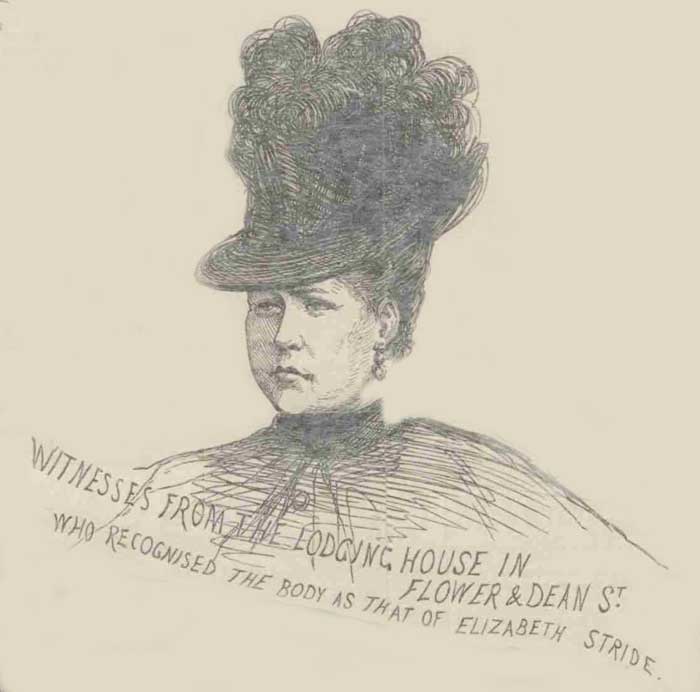 Deputy of the lodging house, 32 Flower and Dean Street.

Elizabeth Tanner was the deputy lodging house keeper at 32, Flower and Dean Street, where, so Tanner testified, Elizabeth Stride had lodged, "on an off" for about six years prior to her murder.

Tanner appeared as a witness on the third day of the inquest into the death of Elizabeth Stride, Wednesday, 3rd October, 1888.

At this time there was some confusion as to the actual identity of the murdered woman, thanks to Mary Malcolm, of Red Lion Square, Holborn, who was claiming that the murdered woman was, in fact, her sister, Elizabeth Watts.

So, in addition to enquiring into the death of the victim, the police, coroner and jury, were also attempting to establish the veracity of Mary Malcolm's claims, which is why, in the following transcript of Elizabeth tanner's evidence, which appeared in Lloyd's Weekly Newspaper on Sunday, 7th October, 1888, the Coroner quizzed her several times on the identity of the murdered woman:-

Elizabeth Tanner, deputy for the common lodging-house at 32, Flower and Dean Street, said:--

"I identify the body as that of a woman who has lodged in our lodging-house on and off for about six years. She was known by the name of "Long Liz.""

Coroner:-"Do you know her right name?"

"No, sir, I don't. She used to tell me that she was a Swedish woman. She told me that her husband went down in the Princess Alice Ship.

Coroner:-"When did you last see her alive?"

"At half-past six on Saturday afternoon. She was in the Queen's Head public-house with me in Commercial-street.

We left the Queen's Head, and walked back to the lodging-house. At that time deceased had no bonnet or cloak on.

Deceased went into the kitchen of the lodging-house, I went to some other part of the building."

Coroner:- "You are quite certain it is her?"

Deceased stayed at the lodging-house last week only on Wednesday and Thursday nights. She had not paid for a bed for Saturday night.

Coroner:- "Do you know any of her male acquaintances?"

"No, I don't. She left the man she was living with on Thursday to come and stay at my lodging-house. That is what she told me.

Coroner:- Have you ever seen this man?"

Coroner:- "What sort of woman was she? Was she quiet or no?"

Coroner:-Was she a sober woman?"

Coroner:- "Did she use to stop out late at night?"

A Juror::- "Did you ever know any other woman who was known as "Long Liz?"

"No other is Long -Liz" ever stayed at my house, I never heard her say she was assisted by her sister."

By Detective-inspector Reid:- "I have never heard the name of Stride mentioned in connection with her."

By a Juror:- "Deceased had been away from my lodging-house for about three months, and only returned last Thursday. I have seen her frequently in the meantime, sometimes once a week, and at other times every other day."

Coroner:- "Did she tell you what she was doing?"

"She told me, she was working among the Jews. She said she was living with a man in Fashion-street."

Coroner:- "Did she speak English well?"

"She spoke English as well as an Englishwoman, but she could speak Swedish as well.

By Detective-inspector Reid:- "I have heard her speak two or three words in Swedish, but not carry on a conversation."

Another transcript of Elizabeth Tanner's inquest testimony had appeared in The Scotsman on Thursday, 4th October, 1888.

It was almost identical to the later version, as published by Lloyd's, but did add the following additional snippets of information.

Mary Malcolm had identified the body at the mortuary as being that of her sister, Elizabeth Watts, not from her facial features, but from a black mark on her leg which, so Mary Malcolm claimed, was the result of her sister having been bitten by an adder when they were children.

She also told the court that her sister, Elizabeth, was sometimes the worse for drink, which left her prone to drunken fits

She had also claimed that, for the last five years, she had been meeting with her sister every Saturday afternoon on the corner of Chancery Lane where she would always hand her the sum of two shillings for her lodgings.

On the Thursday prior to the murder, Elizabeth had turned up at Mary Malcolm's place of work looking for another financial hand out.

Mary had told her, so she claimed, "Elizabeth you are a pest to me," and had then given her a shilling and a short jacket.

Since Mary Malcolm's testimony was holding up a positive identification of the Berner Street victim, the coroner and the jury were anxious to establish whether any of Mary Malcolm's statements were true.

In her inquest testimony, Elizabeth Tanner tried her best to answer the questions put to her concerning the claims of Mary Malcolm:-

Coroner "Do you know whether she had any money?"

"She cleaned two rooms for me on Saturday, and I paid her sixpence for doing it. I do not know whether she had any other money. I have seen her clothes. They were those she usually wore."

Coroner:- "Has she ever told you that she was afraid of any one?"

Coroner:- "Or that any one had threatened to injure her?"

Coroner:- "The fact of her not coming back on Saturday was not such an uncommon event among your people that you were alarmed?"

"No; we did not take any notice of it. I was sent for to go to the mortuary."

BY THE FOREMAM:- "I do not remember at what hour she came into the lodging house on Thursday. I remember taking the 4d from her. She was wearing the cloak I have seen in the mortuary, and she did not bring any parcel with her."

The Foreman:- "Do you ever remember of hearing of her hurting her foot?"

The Coroner:- "Did you ever hear of her having broken a limb in childhood?"