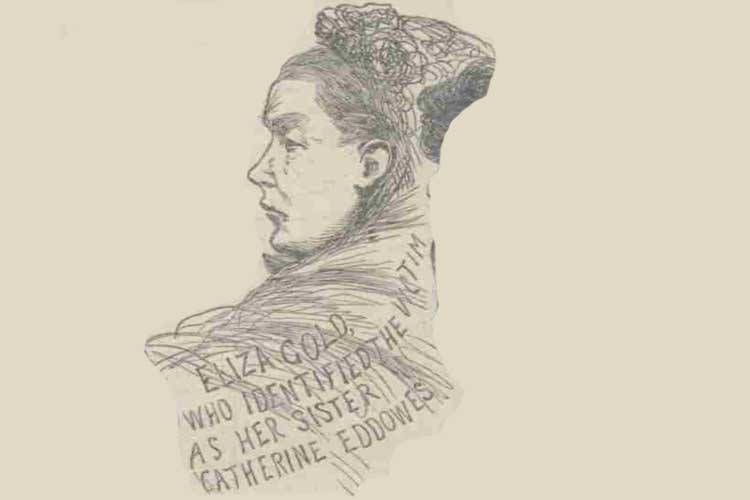 THE SISTER OF CATHERINE EDDOWES

Eliza Gold was the sister of Catherine Eddowes. She was a widow, who was living with a man name Frost at 6, Thrawl Street - in consequence of which, she was also known in the area as Mrs Frost.

She was the first witness to be called at the inquest into Catherine's death, when it opened on Thursday, 4th October 1888.

The London Evening Standard published the following information about her in its edition of Friday, 5th October, 1888:-

Mrs Gold, living at 6, Thrawl Street, Spitalfields - who is also known as Mrs Frost - stated that she went to the mortuary yesterday morning and identified the remains as those of her sister Catherine Eddowes, known as Kate Conway.

She last saw the victim's daughter, Annie, a week ago when she called to her from the street, as she was looking out of window, and enquired if she had seen her mother, to which a negative answer was given.

She could not imagine how she came to be in Mitre Square on Sunday morning."

The Shields Daily News gave a fuller account of her testimony in its edition of Friday, 5th October, 1888:-

Eliza Gold was the first witness called. She said:-

I live at 6, Thrawl Street, Spitalfields. I am a single woman. I have been married, but my husband is dead.

I recognise the deceased as my poor sister (sobbing). Her name was Catherine Eddowes. I cannot exactly tell where she was living. She was living with a gentleman. She had not been married. Her age last birthday was about 43 years, as far I can remember.

She has been living for some years with Mr Kelly. He is in court.

I last saw her alive about four or five months ago. she used to out hawking for a living, and was a woman of sober habits.

Before she went to live with Kelly, she had lived with a man named Conway for several years, and had two children by him. I cannot tell bow many years she lived with Conway. I do not know that Conway is still living. He was a pensioner from the army, and used to go out hawking. I do not know on what terms he parted from my sister. I do not know whether she was in the habit of seeing him.

I am quite certain that the body I have seen is that of my sister.

By the City Solicitor:- I have not seen Conway for 7 or 8 years. I believe my sister was living with him then on friendly terms.

I cannot say. Three weeks ago I saw them together, and they were then living on happy terms. I cannot fix the time when I last saw them. They were living at 55, Flower and Dean Street, a lodging-house, with a person named Smith. My sister, when living there, came to see me when I was very ill.

From that time, until I saw her in the mortuary, I have not seen her.

A Juror pointed out that the witness had, at one stage of her evidence, said that she had not seen her sister for three or four months, whilst later on she spoke of three or four weeks.

The Coroner:- "You said your sister came to see you when you were ill, and that you had not seen her since. Was that three or four weeks ago?"

The Coroner:- "So that saying three or four months was mistake?"

The witness still kept sobbing. On being asked to subscribe her name to her evidence, she said that she could not write her name. Her mark was therefore taken instead."