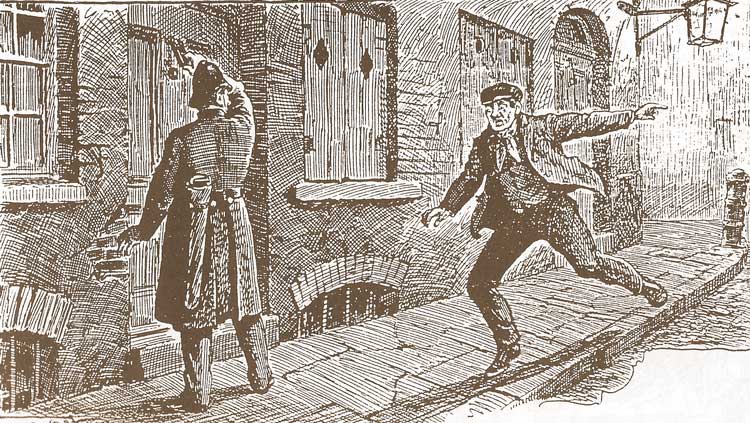 HE FOUND THE BODY OF MARY NICHOLS

Charles Cross was the man who found the body of Mary Nichols, who is widely believed to have been the first actual victim of Jack the Ripper.

In recent years, he has also turned up on the ever-expanding list of suspects.You can read about his candidature in this article.

On Monday, 3rd September, 1888, he appeared as a witness at the second day of the inquest and his testimony was reported by The East London Observer on Saturday, 8th September, 1888:-

Charles Cross, carman, who appeared in Court with a rough sack apron on, said that he had been in the employment of Messrs. Pickford and Co. for some years.

On Friday morning he left home about half-past-three to go to work, and passing through Buck's Row he saw on the opposite sound something lying against a gateway. In the dark, he could not tell at first what it was. It looked like a tarpaulin sheet, but walking to the middle of the road he saw that it was the figure of a woman.

At the same time, he heard a man about forty yards away coming up Buck's Row in the direction that the witness had come from.

He stepped back and waited for the new-comer, who started on one side, as if he feared that the witness was about to knock him down. The witness said to the man, "Come and look over here. There's a woman."

The other man placed his hand on her heart, saying, "I think she's breathing, but it's very little if she is."

The witness replied, "I am not going to touch her."

The woman's legs were uncovered. Her bonnet was off, but was close to her head. The witness did not notice that her throat was cut, as the night was very dark.

He and the other man left the deceased, and, in Baker';s Row, they saw the last witness (Police Constable Mizen), whom they told that a woman was lying in Buck's Row. The witness added, "She looks to me to be either dead or drunk," to which the other man replied, "I think she's dead." The policeman answered "All right."

The other man left the witness soon afterwards. he appeared to be a carman, but the witness had never seen him before.

The Coroner:- "Did you see Police Constable Neil in Buck's Row?"

The Witness "No Sir. I saw no one after leaving home, except the man that overtook me, the Constable in Baker's Row, and the deceased. There was nobody in Buck's Row when we left."

The Coroner:- "Did the other man tell you who he was?"

A Juryman:- "Did you tell Constable Mizen that another policeman wanted him in in Buck's Row?"

The Witness "No: because I did not see a policeman in Buck's Row."

Do you think Charles Cross was
Jack the Ripper?

You can cast your vote for Charles Cross in our online poll of Jack the Ripper suspects.