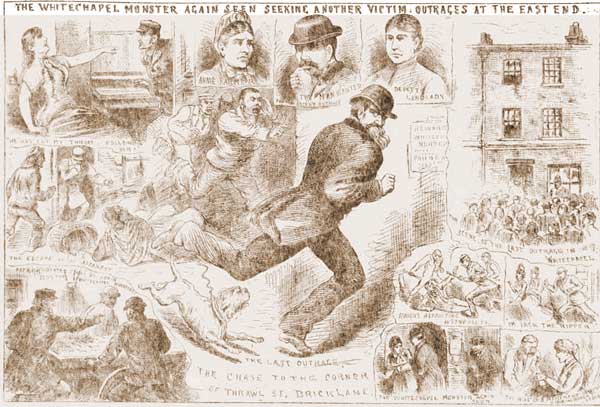 MURDER OF AN UNKNOWN WOMAN

On 21st November 1888, with the East End still reeling from the shock of the murder of Mary Kelly - which had taken place earlier in the month - news broke of another attack on a woman by the name of Annie Farmer, which caused the press to ponder if Jack the Ripper had struck again.

The next day (22nd November 1888) The Dundee Courier and Argus published a more detailed article on what had happened:-

The state of public feeling in the East End of London was shown in a striking manner yesterday.

About ten o'clock a man in a common lodging house in George Street, not far from the scene of the last murder, attempted to cut the throat of a woman, in whose company he had been for some hours previously.

Only a slight wound was inflicted, and the woman was able to scream out an alarm.

Instantly the whole neighbourhood was aroused. Thousands upon thousands of men and women streamed into the main thoroughfares from the by lanes and streets, and for hours the ordinary traffic was carried on with the greatest difficulty and danger.

Right up to last evening the people remained in a state of excitement amounting almost to panic, for few doubted that the attempted murder was the work of the Whitechapel fiend, popularly known as "Jack the Ripper."

Upon the facts of the case there does not seem much reason for the popular belief, and it is certainly not entertained by the police authorities.

All that is known with absolute certainty, however, is that an elderly prostitute, named Annie Farmer, got a man in the streets early yesterday morning, and went with him into several "early" public houses, where they had drink.

The man did not take much liquor, but the woman partook so freely of hot rum that she became intoxicated.

The couple went to the common lodging house at number 19 George Street, and engaged a double bedroom, or rather a boarded-in compartment, containing a large sized bed.

Nothing more was heard of them until about 9:30 when the man was heard to run upstairs, and presently the woman was heard following him and screaming out that he had tried to murder her.

As soon he reached the street the man set off at a smart run, and a number of men, attracted by the woman's screaming, went in pursuit of him.

Strange to say, however, although the streets were thronged with people, no one ventured to stop the fugitive, and after a chase of three or four hundred yards he completely disappeared, and has not since been heard of.

The inmates of the lodging house, seeing that the woman, Farmer, was bleeding from a wound in the throat, took her back to bed, and sent for the police and a doctor.

The first medical man to arrive was Dr Phillips, Police Surgeon, who soon announced that the wound in the throat was little more than superficial.

An ambulance was sent for, and, as soon the wound had been properly dressed, the woman was conveyed to Commercial Street Police Station for examination.

The woman was covered up, and it could not be seen whether the police were carrying a live person or a corpse.

This, of course, added to the popular excitement and strengthened the belief that another horrible murder and mutilation had been committed.

Commercial Street was in consequence completely blocked, and the police had great difficulty in reaching their destination.

On arriving at the Police Station, Farmer was placed in a warm, comfortable room, and interrogated.

She was suffering, however, from the effects of drink and was in such a stupid condition that neither a coherent narrative, nor a satisfactory description of her assailant, could be extracted from her.

It was not, indeed, until the evening that the woman had sufficiently recovered from her debauch to answer questions with anything like clearness, and the description which she gave of the attempt on her life and the appearance of the would-be murderer was somewhat confusing.

It seems certain, however, that the man was not a stranger to her, and that she had known him as a casual acquaintance for about twelve months.

This, together with the evidence of some of the men who pursued the fugitive, has furnished the police with a clue, which it is hoped they will follow to a successful issue.

The description of Farmer's assailant, as circulated by the police, is as follows:-